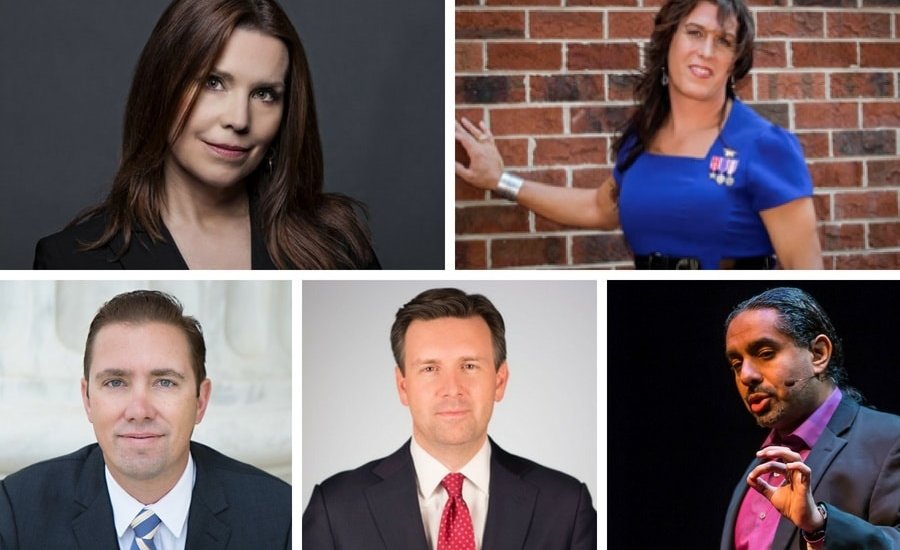 As you start to plan your fall 2018 meeting or event or your 2019 kick-off event, we wanted to call your attention to these five fresh, new keynote speakers we’ve added to our roster that are already in high-demand:

Take a closer look at each of these brand new keynote speakers by reading the short speaker descriptions below and viewing each of their individual speaker profile pages for more information by clicking the links below.

Shon Hopwood, after serving 11 years in prison for robbing five banks, defied the odds to become a appellate attorney and well-known law professor at Georgetown University’s Law Center. Shon is a new motivational speaker with one of the most inspiring comeback stories I’ve seen this year. In speeches, Shon talks about the importance of setting goals and abandoning instant gratification, persevering, and tuning out discouraging voices. He's been featured in The New York Times, The Washington Post, The New Yorker, NPR, and on 60 Minutes. Check out the recent 60 Minutes piece featuring Shon. Once you watch the video, learn more about Shon Hopwood here.

Josh Earnest was the White House Press Secretary under President Barack Obama and is a former NBC/MSNBC political analyst.  Josh is an outspoken and insightful voice on the biggest and most complex issues confronting lawmakers today. One of the most visible political figures of the last decade, he is highly sought-after for his experience-driven observations of the current political landscape, balanced observations, and candid insights. Learn more about Josh Earnest here.

Annie Duke is a world series of poker champion and an expert on risk and decision-making. Annie teaches audiences to embrace and make the most of uncertain times and is the author of the new book, Thinking in Bets: Making Smarter Decisions When You Don’t Have All the Facts. Annie gets into the behavioral science of good and bad decision making, using poker as an analogy for success and failure in life because sometimes the best hand loses and other times the worst hand wins. Learn more about Annie Duke here.

Kristin Beck is a former SEAL Team Six warrior and the first openly transgender US Navy SEAL. Awarded more than 50 ribbons and medals during her 20 years of service including the Purple Heart, Kristin shares her inspiring and motivational story and imparts lessons on acceptance, diversity, leadership, and determination. She is a well-known civil rights and LGBT rights activist and was a key voice in the Congressional Bill to end discrimination towards the LGBT community. Learn more about Kristin Beck here.

Ramez Naam spent 13 years at Microsoft leading teams working on AI, big data, and internet search and holds more than 20 patents including several as co-author with Bill Gates. Currently, a Singularity University co-chair, Naam offers a fast-paced presentation on technology disruption and reviews the “8 Things Disruptors Do,” leaving audiences with practical takeaways on innovating from the bottom up, giving your team permission to fail, capitalizing on the network effect, riding the wave of disruption instead of fighting against it, and more. Learn more about Ramez Naam here.

If you’re interested in learning more about these speakers, or if you have a more specific speaking spot to fill at an upcoming event, please reach out to our team and we will follow up with you directly.

To contact us, you can also fill out the form below, email us, call 1-800-SPEAKER, or live chat with a member of our team right now.