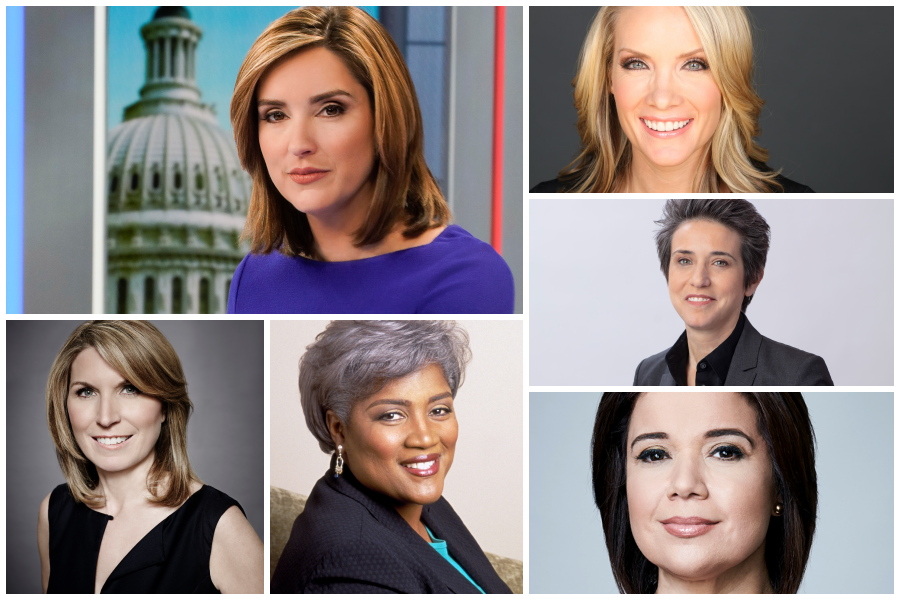 Our political analyst speakers for hire are ready to share their firsthand experiences with your audience as well as answer their biggest questions about campaigning, crisis management, and the current political landscape.Leading Authorities, Inc. speakers bureau represents some of the most intelligent and entertaining female political speakers out there. Looking for a political analyst who can break down the upcoming election? Our female speakers will share with you their predictions, results and trends for this year.

Here are our top recommendations for female political analysts:

Keep scrolling to read more about these female political analysts!

Margaret Brennan’s two-decades of experience shines through her tough but fair reporting and news-making interviews covering domestic politics, foreign affairs, and economic news. The moderator of CBS News’ Face the Nation, Brennan is one of the most visible faces in political news today and only the second-ever female host of the 65-year-old program. She aims to cover issues in a bipartisan way and offers fascinating anecdotes from her weekly interviews with the biggest faces in politics today. See more on Margaret Brennan here.

Candy Crowley is CNN’s former award-winning, nonpartisan chief political correspondent and anchor of the Sunday morning talk show State of the Union with Candy Crowley. The Los Angeles Times called her “no-nonsense” and a “straight shooter,” characterizing her career as “sophisticated political observation, graceful writing, and determined fairness.” She was also the first woman to moderate a presidential debate in two decades. With years of experience, insider knowledge, and access to the day’s top newsmakers, she shares insights on the current state of politics and today’s headlines. See more on Candy Crowley.

Stephanie Cutter is one of the most-trusted voices of the Democratic Party. At the center of every major policy and political debate of the last 20 years, she offers an enlightening look at the current state of politics told through insider stories with today’s top lawmakers. From the halls of Congress to the campaign trail and from the West Wing to the C-Suite, Stephanie is one of the foremost experts at weaving together political strategies to create a narrative that resonates with voters. She was named one of the “50 Most Powerful People in Washington,” by GC magazine. See more on Stephanie Cutter.

Acclaimed Political Commentator and Host of PBS's In Principle

Amy Holmes is a familiar face with an unconventional voice in political news. As an on-air political analyst, Amy dissects and debates the issues of the day, appearing regularly on CNN, MSNBC, Fox News and PBS. She is the host of the PBS weekly program "In Principle," and the former host of the daily MSNBC morning show Way Too Early. In addition to working with TheBlaze and MSNBC, she co-hosted the Washington Times and Talk Radio Network's America’s Morning News, a nationally-syndicated morning radio show heard coast-to-coast by over 1.5 million listeners daily. See more on Amy Holmes.

Respected on both sides of the aisle for her straight shooting and candor, Navarro frequently appears on Meet the Press, Anderson Cooper 360, and The View, to name a few. She’s in touch with the topics people care about, and discusses the latest hot button issues, giving audiences an insider’s view of the upcoming elections and a roadmap for where the country is headed. See more on Ana Navarro.

Kelly O’Donnell is a veteran political correspondent and a White House correspondent for NBC News. Recently honored with the Radio Television Correspondents Association Career Achievement Award, she has covered three administrations and seven presidential cycles for both parties. Speaking with insight from the campaign trail, O’Donnell offers a compelling analysis of congressional culture, electoral politics, and the D.C. political scene as a whole.| See more on Kelly O'Donnell here.

Before joining Fox News Channel, Dana Perino served as the first Republican woman to be press secretary of the United States. Today, she is a revered political commentator and journalist known for hosting her own program on Fox called The Daily Briefing with Dana Perino, as well as being nicknamed “The Voice of Reason” on the hit Fox News show, The Five, where she joins a panel of four other co-hosts to discuss the breaking news of the day and the latest stories capturing the attention of the nation. Perino analyzes politics, the upcoming election, and current events in the same energetic style that has made her so popular on TV. | See more on Dana Perino here.

A.B. Stoddard, a non-partisan, addresses U.S. elections and the political landscape of the day. Frequently meeting with sources and politicians of all stripes, Stoddard offers detailed and smart political and electoral analyses. A regular on CNN, Fox News Channel, and MSNBC, her talks cover the biggest stories in the news, the most up-to-date happenings between Congress and the White House, ongoing budget battles, and the electoral prospects for the two parties. | See more on A.B. Stoddard here.

Called a “tough, savvy, and hard-charging conservative political operator” by The New York Times, Wallace is currently host of Deadline: White House on MSNBC and a regular contributor to Today. She is a master storyteller as she looks at the latest in politics and the media and offers audiences the rundown on today’s biggest players and issues.| See more on Nicolle Wallace here.

Amy Walter is one of the best political journalists in Washington, DC. For more than 20 years, Amy Walter has built a reputation as an accurate, objective, and insightful analyst with unparalleled access to campaign insiders and decision-makers. Named one of the ‘Top 50 Journalists’ by Washingtonian, Walter addresses the electoral process, congressional culture, and the Washington political scene. | See more on Amy Walter here.

Political Strategist, Donna Brazile, is the former interim chair of the Democratic National Committee (DNC), as well as a, professor, author, and commentator. Named one of the ‘100 Most Powerful Women’ by Washingtonian magazine, she was also the first African American woman to manage a US presidential campaign. Her southern charm, big personality, and hilarious anecdotes make her an instant audience favorite. She is known for her ability to expertly analyze the political climate and the driving factors behind it. | See more on Donna Brazile here.

Jennifer Duffy is the former senior editor for The Cook Political Report. She was named as one of the 13 savviest political analysts in the country by Business Insider and has 26 years experience in campaign politics and 23 with non-partisan political analysis. She offers a national or state political outlook, highlighting key voter trends and the issues driving elections. | See more on Jennifer Duffy here.

Katty Kay is the lead anchor of BBC World News America and the author of best-selling book, Womenomics. She reports on economic and political news across the U.S. and serves as a frequent guest on both NBC’s Meet the Press and MSNBC’s Morning Joe. Katty is a 25 year veteran of BBC as has reported across the globe from Zimbabwe to Tokyo. | See more on Katty Kay here.

Whether interviewing presidents, first ladies, heads of state or members of Congress, Norah O'Donnell has earned a reputation as a keen interviewer of today's newsmakers. In her presentations, she takes the audience behind today's headlines for an in-depth look at the issues, the players and the politics at work. See more on Norah O'Donnell here.

Co-author, Politico's Playbook and The Hill to Die On

Anna Palmer is a senior Washington correspondent for POLITICO and co-author of POLITICO’s Playbook, the most indispensable morning newsletter for the biggest influencers in politics. Anna covers the world of Congress and politics, and has successfully chronicled the business of Washington insiders for years. Her stories take readers behind the scenes for the biggest fights in Washington as well as the 2020 election. See more on Anna Palmer.

Kathleen Parker is a Pulitzer Prize-winning columnist for The Washington Post and the former co-host of CNN's Parker Spitzer. She is ranked second for her accuracy in political predictions and helps educate Washington audiences about life beyond the District. She is also a popular commentator on news shows and a regular guest on NBC’s Meet the Press, as well as MSNBC’s Hardball and Fox News’ Media Buzz. | See more on Kathleen Parker here.

Invite The Best Female Political Speakers To Your Event

When it comes to discussing the latest policies or moves by political figures, you want the best political speakers available. Our political speakers come to the stage with a vast amount of experience and an unparalleled understanding of the US government and its international relations with countries across the globe.

After an in-depth discussion with you to get an understanding of what your event needs are, we’ll create the perfect recommendation list. Not only will these political speakers meet your budget, but they’ll also match your event’s goals, theme, and more!

Ready to engage some of the best political commentators for your event? Browse the profiles of these Republican speakers, Democrat speakers, and Non-partisan speakers above and learn more about their experience, speaking topics, fees, and availability—or contact us for more information.

Reach out to us to check any of these individual's speaking fees and availability or if you want to book one of these speakers for your next event.

To get in touch with us, you can also fill out the form below, call 1-800-SPEAKER, or live chat with a member of our team right now.