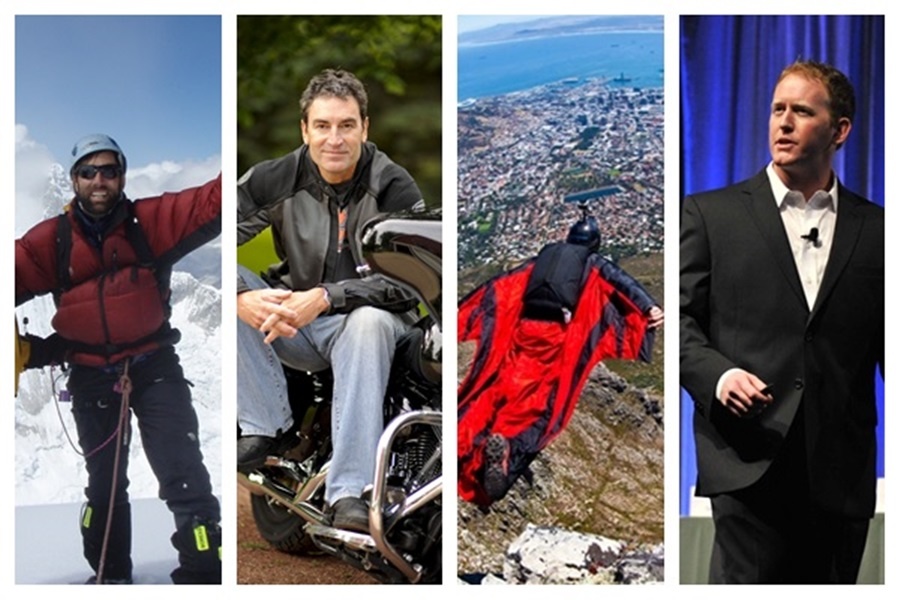 To me, the secret to a winning speech is a speaker who tells a great story. Below are my favorite stories and top recommendations:

Adventurer and wing-suit pilot Joby Ogwyn delivers a hair-raising speech on fully committing to a vision. In one of his most powerful stories, he shares how ignoring his instincts almost led to his death as he ran out of oxygen descending from the top of Everest. Navy SEAL Robert O’Neill’s mantra is “Never quit,” and he gives audiences an look inside his most dangerous missions. He tells the story of standing in line at 7-11 on his way to rescue Captain Phillips from Somali pirates as a frustrating customer inadvertently held up the mission. Blind adventurer Erik Weihenmayer shares insights on shattering expectations, conquering adversity, and leading teams in unlikely places. He tells a poignant story of a disabled veteran pushing past his limits and finding the strength to summit a mountain when he thought he couldn’t go on. Ken Schmidt, the former director of communications strategy at Harley Davidson, shares insights on how to create demand by fostering an emotional connection with customers. He tells a great, “small world” story of running into a Harley enthusiast in the most unlikely of places. National Geographic explorer Steve Boyes inspires audiences with his dramatic adventures into the African wilderness. His presentation is all about the power of exploration and fresh perspectives, and he shares fascinating stories like how he fended off a crocodile with an oar. Dakota Meyer is a Medal of Honor recipient and best-selling author. He talks to audiences about being accountable and making the most out of trying circumstances and shares the dramatic story of defying orders to rescue his fellow soldiers during the Battle of Ganjigal. Michael Durant is the real-life inspiration for Black Hawk Down. He tells the story of how he was overrun, captured, and held prisoner for 11 days after being shot down and a engaging in a horrific street battle. He shares insights on surviving adversity, courage, and leadership. Jack Devine is a spymaster and the former acting deputy director of CIA operations. He shares a funny story of how to tell your children that you are a spy – which included letting them know in a car so there’s no where to go and explaining that assassinations were not his specialty. If you would like more information or availability or fee information, please drop us a note or give us a call.