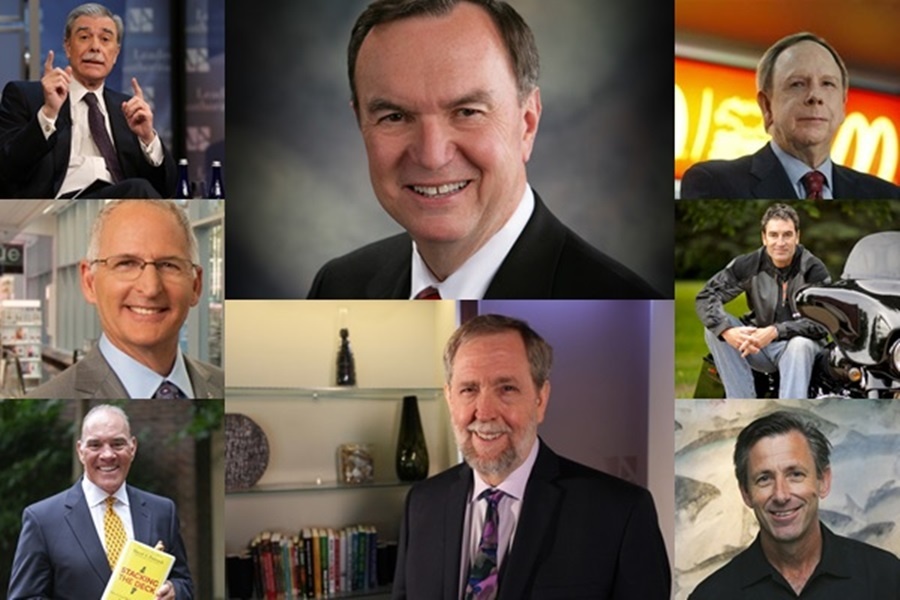 What is the secret to sustainable growth? The speakers below are former presidents and CEOs who led significant growth at some of the best-known brands in the world. They have “walked the walk” and are the go-tos on the lecture circuit for insights on leading through challenging economic times, jumpstarting innovation, and turning around struggling organizations.

Doug Rauch, the former president of Trader Joe’s, helped grow the grocer from a 7/11 knockoff to Fortune’s “hottest retailer in the U.S,” and he shares how to create a culture of innovation.

Ken Schmidt, Harley-Davidson’s former head of communications, helped turn a rough corporate image into a beloved brand. He shares how to create demand through emotional connections.

Michael Duke is the former CEO of Walmart. He grew the retailer’s income 27 percent in his first year despite the recession. He shares stories about growing a company while maintaining its values.

Greg Wasson is the former CEO of Walgreens. He shares how he went from intern to CEO, transformed an iconic brand, and created the first global wellness company during a recession.

Carlos Gutierrez is a former U.S. Secretary of Commerce and the former CEO of Kellogg. Faced with a global stagnation in cereal sales, he turned the company around by focusing on a volume to value strategy.

Jim Skinner is the former CEO of McDonald’s who brought about a “Golden Age for the Golden Arches.” He shares the leadership principles that helped him establish long-term, sustainable growth.

David Pottruck is a repeat best-selling author and the former CEO of Charles Schwab. He grew the company from $50 million to $5 billion and offers a nine-step plan to inspire lasting change.

Gordon Bethune is the former CEO of Continental Airlines and the author of best-selling From Worst to First. He led an unprecedented turnaround at the airline and shares his tactics for success.

Submit the form below to check availability and fees.