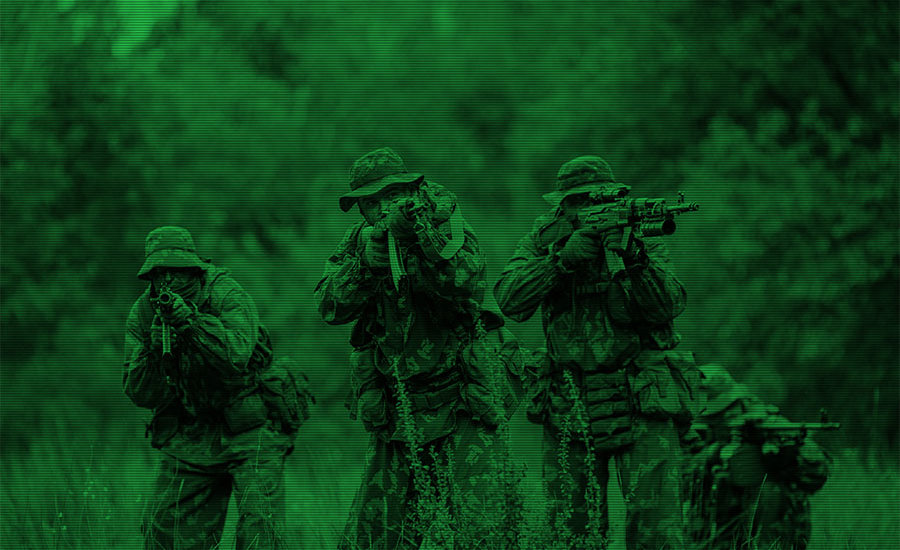 From former Navy SEAL team leaders to commanders of international coalitions, we are honored to represent military legends who take audiences to the front lines and into the Situation Room where they showcase how to lead from the front, make the toughest decisions imaginable, build unstoppable teams, and overcome fear.

Take a look at several of the fantastic military keynote speakers we work with who talk about leadership, teamwork, and more:

SPEAKERS ON BECOMING A 21ST-CENTURY LEADER

SPEAKERS ON EXCELLING UNDER PRESSURE

Keep reading to learn more about each of these military operators and click on the links below to browse through each of their individual speaker profile pages and find out more about their speaking topics and expertise.

Former Commander of U.S. and International Forces in Afghanistan, Author of Best-Sellers Team of Teams and My Share of the Task, and Co-Founder of the McChrystal Group

General Stanley McChrystal led a groundbreaking culture shift within the U.S. military. Recognizing a need to adapt to defeat an enemy that was structured in an entirely unfamiliar way, McChrystal led by example and encouraged all troops to share information more freely to eliminate silos. McChrystal is also the author of the new New York Times best-selling book Leaders: Myth and Reality. He talks powerfully about “creating the right environment” of transparency for your people to understand their strategic goals and then execute against them.

Former Commander of U.S. and NATO Forces in Afghanistan, Former Presidential Special Envoy to the Global Coalition to Counter ISIL, and President of The Brookings Institution

General John Allen is one of the nation’s most legendary military leaders and most respected thought leaders on US-global engagement and leadership of large, complex organizations. When President Barack Obama created the appointment of special envoy for the Global Coalition to Counter ISIL, General Allen was the first American tapped to confront the Islamic State terror group. Through eye-opening and at times emotional anecdotes about bearing the brunt of battlefield challenges alongside the people you lead, leading with both “heart and fist,” and why he believes we’re living amongst a new “greatest generation, “Allen inspires audiences to build more cohesive and adaptable organizations.

Jeff Eggers is a senior policy advisor, security professional, executive coach, and leadership consultant with more than 20 years experience leading high-performing teams for the White House, Department of Defense, and US Navy. A trusted advisor to senior US government officials, Eggers served as President Obama’s Special Assistant for National Security Affairs, where he oversaw critical and sensitive aspects of US foreign and national security policy. Jeff presents a road map for leadership in an unpredictable world and leaves audiences with a better understanding of where they are today and where they need to go to get ahead.

Gen. Nicholson stepped down as Commander of U.S. Forces-Afghanistan and NATO’s Resolute Support mission in September of last year. An energetic, combat-seasoned voice on leading complex organizations to win, Gen. Nicholson is widely admired for his position as one of our nation’s greatest “Warrior-Diplomats,” and as the longest-serving commander in the Afghan theatre of war. Nicholson draws on his experience with large military units and allied coalitions in times of complexity and risk and provides lessons that are highly relevant to improving strategic thinking, strengthening results through collaboration and developing resilient colleagues who will thrive in today’s fast-paced global operating environment.

General Ann Dunwoody led the US Army Material Command and is our nation’s first female four-star general. She is widely renown as one of the military’s most talented logistical experts and has been a leader and trail blazer at each step in her career. She became the first woman to lead a battalion, has overseen budgets of $60 billion, led over 60,000 Army employees across 145 countries, managed the entire Army supply chain in Iraq and Afghanistan, and became the Army’s first female named General Officer of Fort Bragg. She was awarded her fourth star in 2008 and then she wrote the book, A Higher Standard: Leadership Strategies from America’s First Female Four Star General. Dunwoody continues to inspire others with her amazing story.

General Vincent K. Brooks is a career Army officer who recently retired from active duty as the four-star general in command of all U.S. Forces in Korea, where he concurrently commanded United Nations Command as well as the Republic of Korea—U.S. Combined Forces Command comprising over 650,000 Koreans and Americans under arms. Widely respected as a speaker and leader of cohesive, innovative organizations, within and beyond the military, his areas of expertise include leadership in complex organizations, crisis leadership, and building cohesive trust-based teams, national security, policy, strategy, international relations, military operations, combating terrorism and countering the proliferation of weapons of mass destruction, as well as diversity and inclusion.

Chris Cassidy has had a decorated dual career as a U.S. Navy Captain (SEAL) and NASA Astronaut. CAPT Cassidy’s career began as a member of the U.S. Navy SEALs team where he spent 11 of his 28 years in the Navy — making two six-month deployments to Afghanistan and a further two deployments to the Mediterranean. Making his way from Earth to the cosmos, CAPT Cassidy was selected as an astronaut candidate by NASA in 2004. Assigned his first spaceflight in 2009 as a mission specialist aboard the STS-127, he became the 500th person in history to fly into space, as well as the second-ever SEAL.CAPT Cassidy shares his personal story with the audience — both from his time as a Navy SEAL and a NASA astronaut — about the importance of persevering in the face of adversity and on the path to success.

Sergeant Dakota L. Meyer is a United States Marine Corps veteran and recipient of the military’s highest honor, the Medal of Honor. He is the New York Times best-selling author of the book, Into the Fire: A Firsthand Account of the Most Extraordinary Battle in the Afghan War. Meyer earned his medal for his actions during the Battle of Ganjigal, which was part of Operation Enduring Freedom in Afghanistan. He is the first living Marine to have received the medal since 1973 and one of the youngest. Humble and propelled by a respect for his fallen comrades, Meyer insists that he is not a hero, and that any Marine would do the same thing. He addresses inspiration, motivation, courage, leadership, believing in yourself, doing what is right, and what happened that day in Afghanistan. Meyer is a successful entrepreneur who also currently serves in the Individual Ready Reserve of the US Marine Corps Reserve.

Having served 30 years as a SEAL leader, retired Rear Admiral Scott Moore is a master in organizational leadership and team building. He served in every leadership position in the SEAL teams, including the former commander of the Naval Special Warfare Development Group, and closed out his career as the number two leader in the entire SEAL organization. Rear Admiral Scott Moore offers audiences a once in a lifetime glimpse into the mind of the man whose uncanny operational skill and invaluable leadership experience make him one of the few who knows what it takes to both create and lead the world’s most high-performing teams.

Chris Fussell is a former US Navy SEAL and a managing partner at the McChrystal Group Leadership Institute. His new book is called, One Mission: How Leaders Build a Team of Teams, which provides readers with a road map for breaking down silos, increasing collaboration, skillfully implementing organizational change, and building a “team of teams.” His book was named one of the "Top 3 books on leadership" by Strategy + Business and it was also featured on Forbes’ summer reading list.

Jake Harriman is the founder and CEO of Nuru International, a U.S.-based social venture that empowers individuals living in remote and rural areas to combat extreme poverty in their communities. Jake was inspired to found Nuru after being faced with the effects of extreme poverty in war-torn regions of the world during four tours of duty in the Middle East, Africa, and Asia. He shares stories that are equal parts heart-breaking, gripping, and hilarious to illustrate the importance of strong leadership in war and business.

One of the 1st Female US Army Rangers

Army Major Lisa Jaster is a soldier, an engineer, a wife and mother, and a trailblazer. One of only three women to graduate from the first integrated United States Army Ranger program—one of the most difficult combat training courses in the world—Lisa was the first female Army Reserve officer to become a Ranger. Jaster talks about overcoming fear of failure and explains why she felt it was so important to attend Ranger School despite the odds being against her. She also shares how she stayed motivated during those dark moments, and why you have to resist the urge to even consider quitting, saying, “Once you even think about quitting, you let the quit in you.”

Retired Marine Sergeant and Paralympic Bronze Medalist, Rob Jones’ life is synonymous with fearless perseverance. A former Lance Corporal in the Marines, Rob served two tours in Iraq and Afghanistan between 2008 and 2010. In 2010, he was struck and injured by a land mine, resulting in a double above-the-knee leg amputation. Since being discharged honorably from the Marines, Rob Jones has continued to motivate himself to achieve new heights. He shares his story of perseverance and the tricks he uses to stay inspired and keep reaching—including his belief that the best way to improve yourself is by willingly taking on new struggles that push you past your deepest fears.

A 21-year veteran of the United States Air Force, Colonel Nicole Malachowski (USAF, Ret.) wanted to fly military jets from the moment she saw them at her first air show when she was five years old. She achieved that goal—and then some. A former fighter squadron commander and mission-ready pilot in three operational fighter squadrons and the first woman to fly on the Air Force Thunderbirds, Nicole has the perfect message to inspire audiences to think differently about the headwinds of change they face—organizationally and personally. She encourages audiences to ask, “Why not me?” and dream big no matter how unlikely the odds.

BOOK A MILITARY LEGEND FOR YOUR NEXT EVENT

Are you interested in bringing one of these military keynote speakers to your next event stage? Let us know!

To get in touch with us right away, you can also email us at Contact@lauthorities.com, start a live chat with a member of our team online, fill out the form below, or call us at 1-800-SPEAKER.