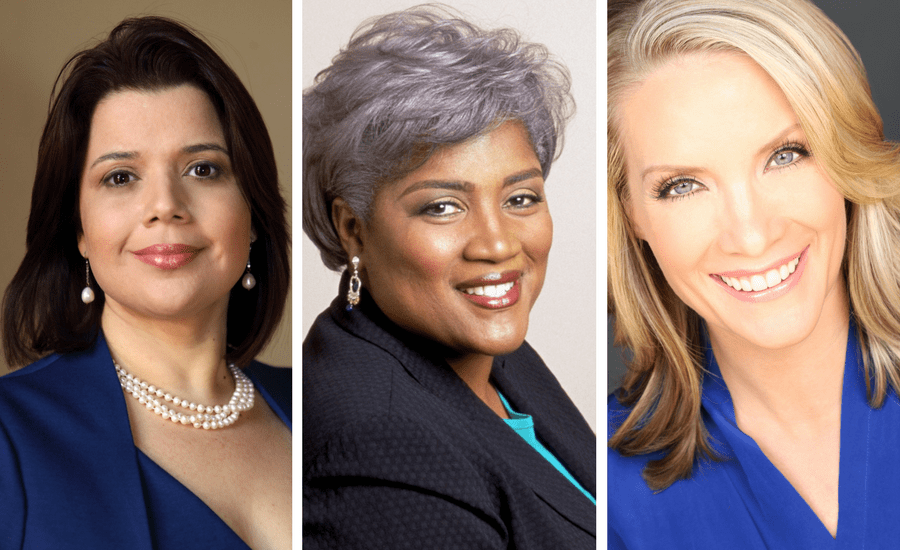 Whether right or left of center in terms of personal views or experience, these strong and smart women work to get the news right every day—and deliver non-partisan presentations that inform and engage audiences:

Ana Navarro, CNN Political Analyst
Respected on both sides of the aisle for her straight shooting and candor, Navarro frequently appears on Meet the Press, Anderson Cooper 360, and The View, to name a few. She’s in touch with the topics people care about, and discusses the latest hot button issues, giving audiences an insider’s view of the upcoming elections and a roadmap for where the country is headed.

Dana Perino, Host of Fox’s The Daily Briefing with Dana Perino
Dana Perino was the White House's first female Republican press secretary and a widely-respected member of President George W. Bush's senior cabinet. She is currently a popular political commentator on Fox News. In addition to hosting Fox's The Daily Briefing, she is also the co-host of Fox's The Five. Perino analyzes politics, the upcoming election, and current events in the same energetic style that has made her so popular on TV.

Norah O’Donnell, Co-Host of CBS This Morning
Whether interviewing presidents, first ladies, heads of state or members of Congress, Norah O'Donnell has earned a reputation as a keen interviewer of today's newsmakers. In her presentations, she takes the audience behind today's headlines for an in-depth look at the issues, the players and the politics at work.

Amy Walter, National Editor of the Cook Political Report
Amy Walter is one of the best political journalists in Washington, DC. Over the past 14 years, she has built a reputation as an accurate, objective, and insightful analyst with unparalleled access to campaign insiders and decision-makers. Her analysis has earned her numerous accolades, including the Washington Post’s Crystal Ball Award. Walter addresses the electoral process, congressional culture, and the Washington political scene.

Would one of these speakers be a good fit for an upcoming event or meeting? Call us at 1-800-SPEAKER or chat live with a member of our team now.