Get Your Team Moving With A Motivational Speaker 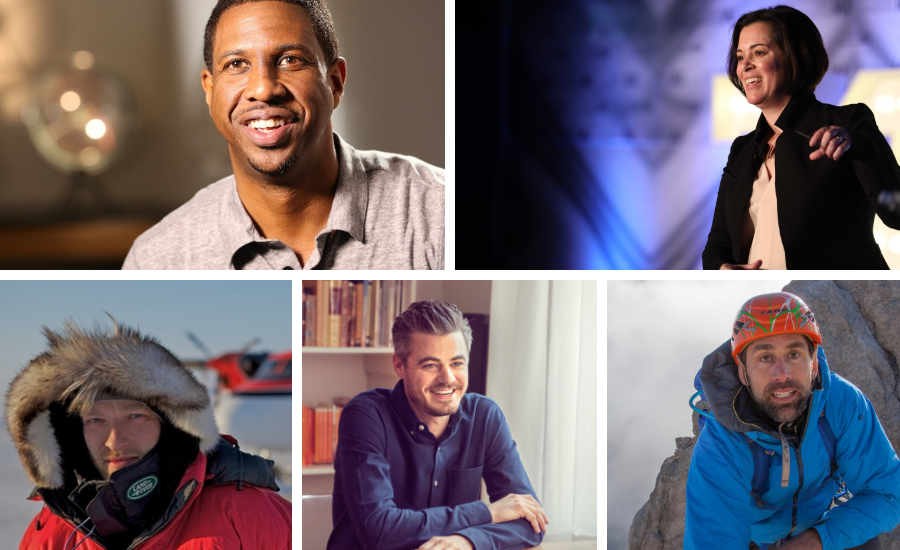 We often talk to clients who want a speaker who can come in, make a strong impression, and inspire a team that’s got a big goal ahead of them into action. Here are five incredible speakers who do that and then some. Check them out below!

Read on for more information about these incredible speakers:

Nicole Malachowski was a breakout star on the lecture circuit this year and we’re so happy to be working with her. It’s hard to watch her talk without getting emotional—she covers both her ascendance to become the First Woman Thunderbird Pilot in the Air Force and how she was ultimately forced to retire due to a medical condition. Nicole speaks honesty about drawing on inner strength and having the courage to say your goal out loud and ask questions like, “Why not me?” | Watch Nicole's video here.

Born into deep poverty in Mississippi, Hakeem Oluseyi grew up in some of the roughest neighborhoods in the country. He realized a love of science and space at a young age and, despite near constant discouragement, went on to obtain three degrees, 12 patents for inventions in modern computer chips, and to work on Nobel Prize-winning research projects. Funny, warm, honest, and inspiring, Hakeem moves audiences to never give up. He also authored the forthcoming memoir, The Stars in My Soul: My Unlikely Journey Through Space and Time (the movie rights have already been bought!). | Watch Hakeem's video here.

With incredible feats of endurance, Ben Saunders challenges conventional wisdom and proves what can be accomplished through ambition, passion, and a refusal to quit. Best known for leading one of the most ambitious polar expeditions in a century, he was the first to successfully complete an epic, 105-day, 1,800-mile trek on foot to the South Pole. A speaker at 3 TED conferences, Ben uses stories and stunning visuals to illustrate and justify his beliefs that that “No one else is the authority on your potential” and “Impossible is just someone’s opinion.” | Watch Ben's video here.

Founder and CEO of Charity : Water

Scott Harrison launched his company Charity: Water with two huge goals: To turn the concept of what charity is on its head, and to eliminate the global water crisis in his lifetime. Today, he’s known for his innovative business model, which many investors said couldn’t work, and for funding water projects in 24 countries. He talks about making the change from being a night club promoter living a lavish lifestyle to becoming one of the world’s most-recognized philanthropists. He touches on why it’s never too late to make a change, how to solve problems with new ideas, and how to overcome obstacles with creativity and innovation. | Watch Scott's video here.

At the age of 14, Erik Weihenmayer lost his vision. But he managed to push past the anger, frustration, and fear, and made friends with other blind individuals who went rock climbing. Weihenmayer continued working on his craft and, at age 33, became the first blind person to reach the summit of Mount Everest. His incredible story of determination and perseverance has been featured on the Today Show, Oprah, Good Morning America, and more. And this year, an Award-Winning documentary about Erik and his latest adventure kayaking the Grand Canyon called The Weight of Water was released. In speeches, he teaches audiences to follow his path and lead a "No Barriers" life, or a life without self-imposed limitations. | Watch Erik's video here.

For more information about these motivational speakers and to browse through more topics, areas of focus, and accomplishments, visit our topic page.

If you’re interested in checking availability and fees for an upcoming speaking spot that your organization is looking to fill with a motivational speaker, let us know!

Want to see more custom speaker options? Reach out to us, and we can send you a customized list of speaker recommendations tailored specifically to your event's topic, theme, audience, and more. Get your custom speaker list.

To get in touch with us, you can also fill out the form below, email us, live chat with a member of our team online, or call us at 1-800-SPEAKER.