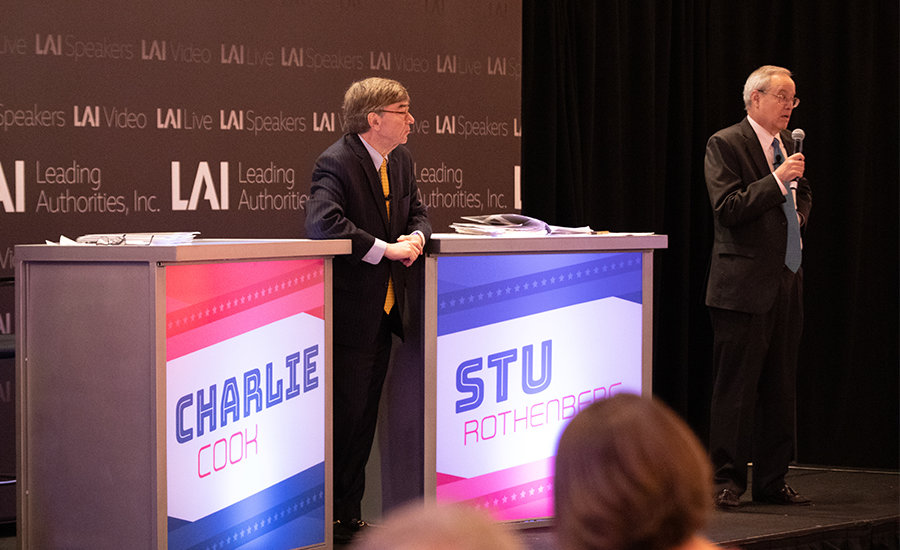 Just two days after the 2018 midterm elections, Leading Authorities hosted its annual election recap event with popular political analysts Charlie Cook and Stu Rothenberg at the Fairmont Hotel here in Washington, DC. Charlie and Stu have been two of the most-trusted names in political analysis for decades.

In front of an audience of association and government relations leaders, Charlie and Stu touched on the election’s surprises and outcomes, as well as the questions that still remain days after the midterms.

After ticking through the results of some of the tighter races, Charlie then pivoted to offer his expert opinion on 2020 and what lays ahead. Especially interesting was Charlie’s take on the likely Democratic challenger to President Trump. Mentioning the impressive number of women and minorities who were elected this midterm cycle, Charlie predicted that “we’re going to see a Democratic field that’s going to be every bit as big as the Republican field in 2016—with some very interesting dynamics.”

Charlie then kicked things over to Stu, who began with his overarching takeaway from the night. Rothenberg believes that the midterms represented a continuation of what we saw in 2016, in terms of a divided America, saying, “What we saw was two elections, which produced two different outcomes—given that we are really two different countries here.”

He then began discussing the likelihood that President Trump would be able to work with a Democratic majority in the House of Representatives on pressing legislative items, including healthcare reform and working to lower the price of prescription drugs. “The President does set the tone,” Rothenberg began, adding, “Could he work with Democrats on things like infrastructure, drug pricing? It’s certainly possible ... but I think there are lots of reasons this won’t work out.” Rothenberg noted that between Trump’s style, and incentives in place for Democratic and Republican leadership, he believes it’s unlikely that we will see bipartisanship triumph in Washington over the next two years.

After offering a thorough diagnosis of Washington’s current ailments and bright spots, Cook and Rothenberg turned to Q&A.

Leading Authorities’ CEO Mark French began with a question about gun control reform, given the recent shooting at a night club in California. Charlie answered the question by saying that while he believes meaningful gun reform will be passed, it won’t happen any time soon. “There will be a tipping point at some point ... It will happen,” he said, before adding, “But I don’t think we’re quite there yet.”

Next, Stu answered a question from an audience member about the ongoing Governor’s race in Georgia. Stu began by noting how many “close calls” there were this election cycle, and then noted that, “There are mail ballots that are still changing races. There are a bunch of races that could still flip—including the Arizona senate race.”

Stu also answered a question about what he thought was the biggest surprise of Tuesday’s midterms. “The biggest surprise from Tuesday is that there were relatively few surprises,” he said, noting that old polling rules still apply despite an untraditional electorate, and that polls were largely accurate despite being off in 2016.

BOOK CHARLIE OR STU TO SPEAK AT YOUR NEXT EVENT

Charlie Cook and Stu Rothenberg are fantastic additions to conferences or events that need a better understanding of the current political landscape and it's impact on organizations across the globe. Approachable and knowledgeable, they bring insight, humor, and credible analysis to every event.

Are you hosting an event or meeting in 2019 where you think Charlie or Stu may be a good fit? Please let us know!

If you are interested in checking their availability and fees for an upcoming event, or want to book one or both of these fantastic election forecasters and prominent pollsters to speak at your next conference or meeting, simply contact our team today to get started.

Want to see more options? Simply reach out to us, and we can send you a customized list of speaker recommendations tailored specifically to your event or meeting’s topic, theme, location, audience, and more. Get a custom speaker list.