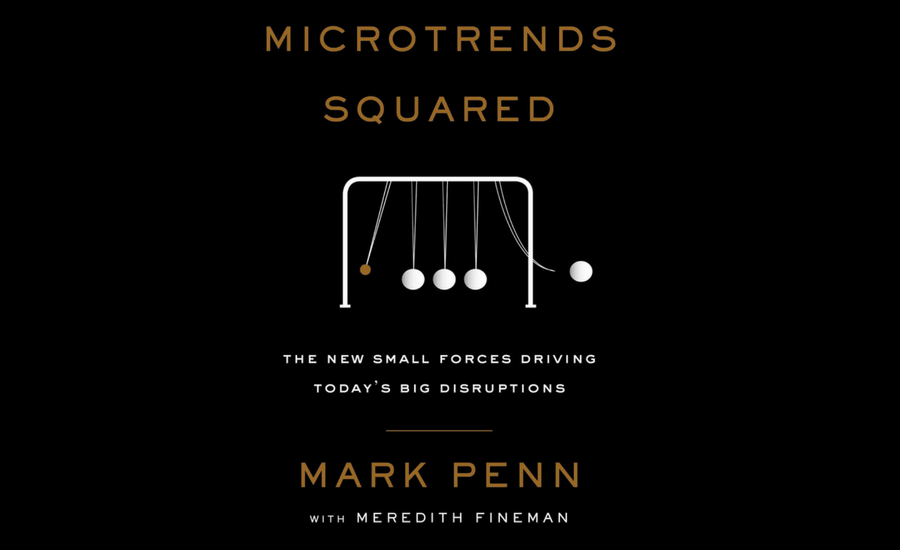 What trends will have a major impact in the next ten years? Mark Penn’s new book, Microtrends Squared: The New Small Forces Driving the Big Disruptions Today, offers a glimpse into the small forces that will most likely affect the next decade of purchasing decisions and how to begin taking advantage of them before it’s too late. If you are interested in identifying the disruptive forces your industry will face and learn how you can adapt your business to these emerging developments, you’ll find Penn’s talk interesting and informative.

One of America's most influential political strategists and pollsters who coined the term "soccer moms", Penn has boldly argued that the future is not shaped by society’s broad forces but by quiet changes within narrow slices of the population. He showed how the behavior of one small group can exert an outsized influence over the whole of America in his New York Times and Wall Street Journal best-selling book, Microtrends: The Small Forces Behind Tomorrow's Big Changes.

Ten years later, he identifies the next wave of trends reshaping the future of business, politics, and culture in his forthcoming book, Microtrends Squared. Written in conjunction with Meredith Fineman—an entrepreneur, writer, and media expert—this highly-anticipated book makes sense of what is happening in the world today, illuminates the shifts that will be coming in the next ten years, and offers a clear vision for the future of business, politics, and culture.

Microtrends Squared, which will be released on March 20th, is a must-read for innovators and entrepreneurs, political and business leaders, and for every curious reader looking to understand the wave of the future when it is just a ripple.

Throughout the course of his 40-year career in market-research, advertising, public relations, polling, and consulting, Penn has advised top world leaders and led Fortune 100 corporations through periods of major disruption. He is the founder, president, and managing partner of The Stagwell Group, a private equity fund that invests in marketing services companies, and previously held senior executive roles with Microsoft, WPP, and senior strategic roles on electoral campaigns for President Bill Clinton, Senator Hillary Clinton, and Prime Minister Tony Blair. Time Magazine has called Penn 'The Master of the Message" and The New York Times has called him "The Guru of Small Things," because of his unique ability to find and motivate niche groups in society.

If you think that Mark would be a good fit to speak at an upcoming event, live chat with a member of our team now or call us at 1-800-SPEAKER.