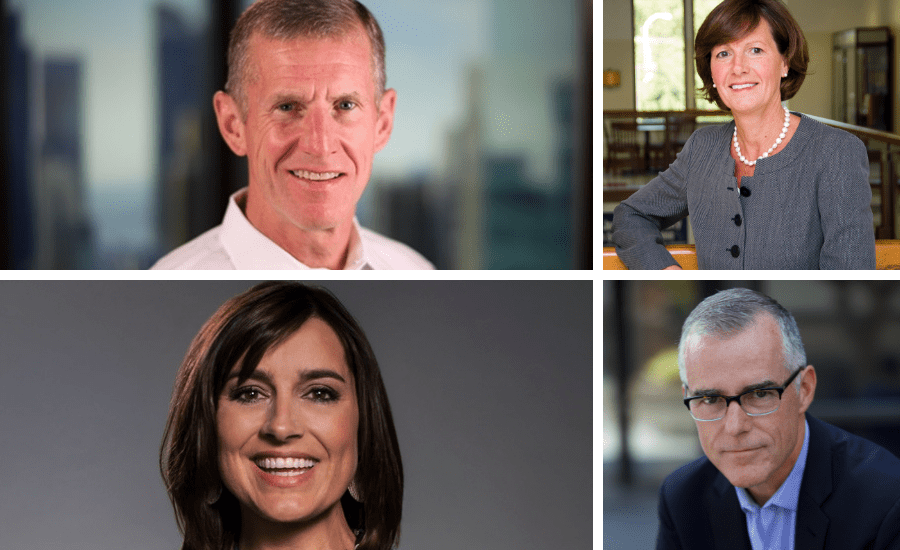 Countless studies have shown that the role of leadership in the workplace has never been more vital to success. As millennials shift the way we work and embed looser cultural norms like working from home, leadership remains the strong force they look to for inspiration. These speakers talk about the role leadership must play in any modern business model:

Keep scrolling to read more about these speakers!

World-Renowned Commander of U.S. and International Forces in Afghanistan
General Stanley McChrystal led a groundbreaking culture shift within the US military. Recognizing a need to adapt to defeat an enemy that was structured in an entirely unfamiliar way, McChrystal led by example and encouraged all troops to share information more freely to eliminate silos. McChrystal is also the author of the new New York Times best-selling book, Leaders: Myth and Reality. He talks powerfully about “creating the right environment” of transparency for your people to understand their strategic goals and then execute against them.

Legendary Chief Marketing Officer and EVP, Chick-fil-A
Robinson led Chick-fil-A’s global marketing efforts for three decades, overseeing a transition from a small chain of mall outposts to a booming nationwide fixture (and one of America’s most-loved brands). He takes audiences behind-the-scenes at Chick-fil-A, talking in great detail about how the organization weathered identity crises, carefully stewarded wildly-successful product launches and partnerships, flipped the script on industry standards in marketing and corporate culture, and created an ecosystem of happy employees, raving fans, and leaders who serve more than the bottom line.

Former Director of the NSA and former Commander, U.S. Cyber Command
Michael Rogers served under both Presidents Trump and Obama and oversaw the NSA and Cyber Command responses to both the Snowden leaks and Russian interference in the 2016 election. Extremely future-focused, and constantly reevaluating the threat landscape for businesses, Rogers talks about how leaders ought to react in the face of crisis or change. He also shares the leadership lessons he learned throughout the NSA’s very public restructuring. Groups are left with a better understanding of how to ensure their organization is optimized for success moving forward.

Former Acting FBI Director
Few people have more relevant or more recent experience securing our nation at the highest levels of the US government than Andrew McCabe. The author of the new book, The Threat: How the FBI Protects America in the Age of Terror and Trump, he spent 22 years at the FBI before assuming the role of Acting Director in May 2017. A sharp and witty storyteller, McCabe talks about assuming a leadership role in a time of transition. He is candid about the challenging side of leadership, and shares the specific, step-by-step path he used to chart a course forward during one of the most turbulent times in FBI history.

First Female President of a Professional Sports Franchise
Susan was the first female president of a professional sports franchise (the Washington Bullets—now Wizards), and one of our most-popular motivational and leadership speakers. She led the largest ticket revenue increase in the history of NBA franchises, and took her season ticket holder renewal rate from 64% to 90%. Now a business professor, she almost always gets standing ovations. She cracks audiences up and shares hilarious and upbeat anecdotes paired with lessons learned from a life of unprecedented success. Personally, she is now spearheading a program to help more women secure sports careers.

Former CEO of Flywheel Sports, Former Global President of Gatorade, and Former Marketing Director at Nike
The former CEO of Flywheel Sports and former President of both Equinox Fitness and Gatorade, Sarah Robb O’Hagan is the author of the book, Extreme You: Step Up. Stand Out. Kick Ass. Repeat. Her leadership philosophy hinges on an ability to extract peak performance out of everyone on a team by setting high goals and standards unilaterally. Passionate and high-energy, Sarah talks about the importance of communicating strong corporate values, piecing together unique skill sets, and working through intergenerational dynamics.

LOOKING FOR A LEADERSHIP SPEAKER?

Would one of these leadership speakers be a good fir for an upcoming event you are hosting in 2019 or 2020? Simply contact our team to get started today!

If you want to check any of these individual's speaking fees and availability or want to book one of these speakers for your next event, reach out to us.