Home / Blog / Olympic Speakers for Your Next Event

Olympic Speakers for Your Next Event 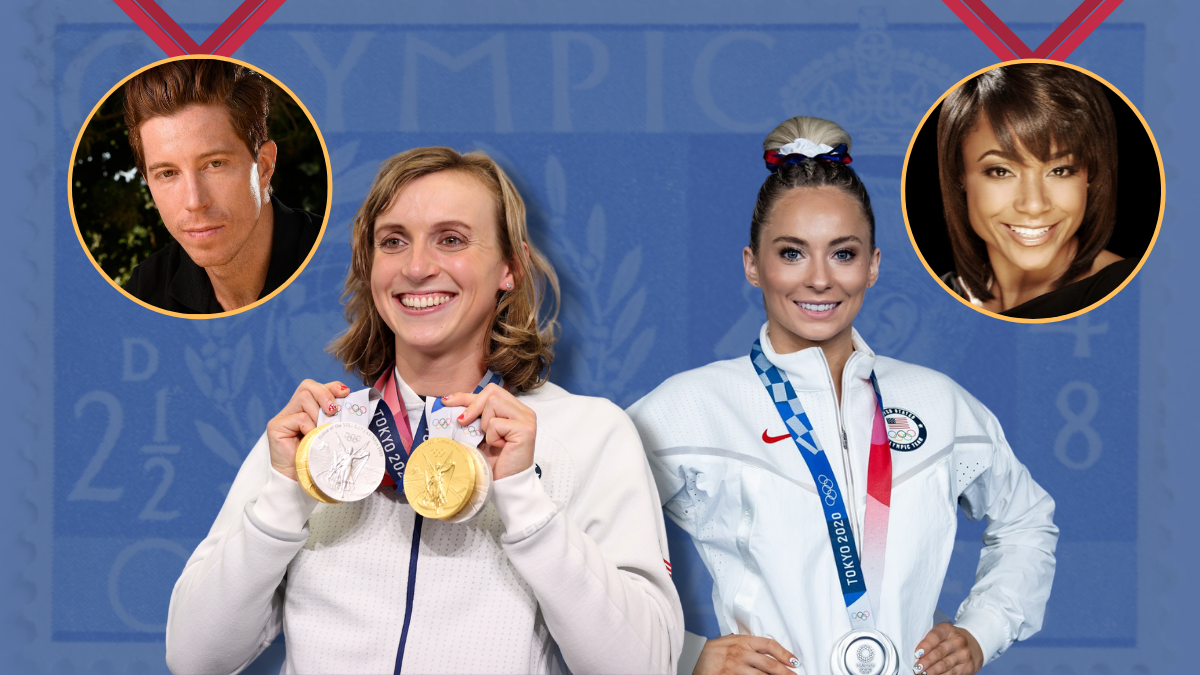 Behind every Olympian is a story of chasing dreams and persevering through challenges and hardships to be one of the best in the world.

Having pushed themselves to beat the odds and redefine what impossible means, these Olympians are sharing insights from the arena and field to motivate organizations and individuals as they prepare to position themselves to reach the pinnacle of their industries.

Katie Ledecky, Olympic Champion Swimmer; 10x Olympic Medalist, 15x World Champion, 14x World Record Breaker, one of the most dominant athletes the world has seen and among the most celebrated of her generation, she is a 10-time Olympic medalist and 15-time World Championship medalist — the most of any female swimmer. As a serial winner who possesses the unique ability to energize audiences and spark high performance, she draws from her inspiring personal journey to the winner's podium at the Olympics to share elite-level strategies for visualizing and achieving success at the highest levels in any field.

MyKayla Skinner, Olympic Silver Medal-Winning Gymnast, a powerhouse performer and model teammate who vaulted her way to a silver medal at the 2020 Tokyo Olympics after replacing Simon Biles in the event following an unexpected turn of events. A champion on and off the gymnastics floor, she shares her inspiring — and sometimes unconventional — road to success while providing an Olympian's perspective on owning your moment, performing at a championship level in high-pressure situations, and charting your own path to achieving your goals.

Shaun White, Olympic Gold Medalist and Entrepreneur, who is best known for his highly decorated career as a professional snowboarder and skateboarder, having collected three Olympic gold medals, 23 X Games medals, and 10 ESPY awards. White captures the audience’s attention with the same intensity and magnetic presence that made him a household name as he discusses what it means to embrace risk to produce extraordinary results, as well as how to become a peak performer in your field.

Rob Jones, Retired Marine Sergeant, Paralympic Bronze Medalist, and Endurance Athlete, who, as a former combat engineer with the U.S. Marines, was struck and injured by a landmine resulting in a double above-the-knee amputation. He draws from his experience devising a new pathway and becoming an Olympic medal-winning rower to share his inspiring story of perseverance and provide audiences with his values-based belief system to stay motivated, harness selflessness, and overcome any obstacle.

Dominique Dawes, Three-Time Olympic Gymnast, Olympic Gold Medalist; First African American Gymnast to Qualify for the Olympic Games, who made history and stole the hearts of Americans for her immaculate performances on the world’s biggest stages. She continues to empower and inspire audiences through her transparent and emotionally captivating speeches, telling a relatable story highlighting the importance of healthy self-esteem, teamwork, and positive thinking on the journey to the mountaintop.

Mia Hamm, Olympic Gold Medal-Winning Soccer Player, who is recognized as one of the greatest all-around soccer players ever and inspired millions of people as the leader of World Cup and Olympic gold medal-winning teams. Known for her athletic prowess and devotion to advancing women’s sports, Hamm speaks on the importance of drive and positive self esteem when it comes to fueling team members and working toward a common goal.

Earvin Magic Johnson, Legendary NBA Player, a gold medalist with the 1992 “Dream Team,” as well as a leader and champion in the business world. Just as he did on the basketball court, Johnson brings his winning spirit to the stage as he shares his game plan for making the right plays toward achieving your goals.

Oscar De La Hoya, World Champion Boxer and Accomplished Businessman, whose gold medal success at the 1992 Olympic Games in Barcelona was the beginning of him becoming one of the most recognizable and talented figures in the boxing universe. He shares actionable insights for applying the same drive he showed in his boxing career to the business world, as well as how to use adversity as fuel to achieve your goals.

Amy Purdy, 2018 Paralympic Silver Medalist, 2014 Bronze Medalist, and Three-Time World Cup Gold Medalist, who, after having both legs amputated during a life-altering, near-death experience, challenged herself to move on with her life and attain goals that that even those with both legs struggle to achieve – sharing with audiences her extraordinary comeback story of living beyond limits.

John Coyle, Olympic Silver Medalist and Entrepreneur, who draws from his experiences as a champion in the speedskating world and an innovator in the business world to provide audiences with practical guidelines that empower them to take extraordinary action to innovate their lives and careers to achieve breakthrough performance, flourish in the face of adversity, and create meaning in the process.

Dara Torres, Record-Breaking Olympic Medalist and Author, who, as a five-time Olympian, 12-time medalist, and the oldest Olympic swimmer of all time, draws from her experiences to inspire audiences to keep chasing their dreams, even when they seem impossible. Telling the story of her comeback to win three silver medals at the 2008 Beijing Olympics, Torres demonstrates her framework for overcoming self-limiting beliefs, such as age.

Mike Eruzione, Olympic Legend, who captained the 1980 United States Olympic Hockey team to a gold medal victory against Russia in what would become known as the “Miracle on Ice.” He uses this true underdog story to motivate and inspire audiences, while also speaking to what can be achieved through teamwork.

Ruben Gonzales, Four-Time Winter Olympian and Business Author, who draws from his journey representing the U.S. in luge on the global stage to inspire and motivate audiences worldwide. An internationally recognized expert on developing mental toughness, he teaches the personal effectiveness system he used to achieve success in sports and in business, with a client list that includes the who’s who of corporate America, such as Dell, Coca-Cola, Farmers Insurance, Ortho McNeal, Oracle, and even the U.S. Treasury Department.

Janet Evans, Olympic Gold Medal Winner for Swimming, who defied the odds by beating competitors who were bigger and stronger than her to capture her Olympic medals, including four golds. She shares with audiences her steps for accomplishing goals, reaching peak performance, building high-performing teams, and leadership through goal attainment.

Vince Poscente, Olympic Gold Medal Skier, CEO of The Goal Acceleration Institute, and NY Times Best-Selling Author, who lets audiences in on his against-all-odds Olympic strategy to demonstrate how he made the transformation from weekend skier to Olympian in four years and how organizations can implement his “GOALS-FAST” approach to achieve big goals in short order.

Bonnie Blair, Olympic Speedskater and Gold Medalist, who, as one of the winningest U.S. female Olympians of all time, captivates audiences with her keys for succeeding under pressure, producing your best performance when it counts the most, and achieving peak performance as an individual and an organization.

Jim Craig, Olympic Gold Medalist, Founder/President of Gold Medal Strategies, who draws from his experience as the goaltender for the gold medal-winning U.S. hockey team to inspire, instruct, and provide strategic and winning direction to organizations of every size and in every industry, just as he has done for Kellogg’s, Bayer, Deloitte, Bank of America, and several more of the world’s most prestigious companies.

Book an Olympian for Your Next Event

Is your group looking for a speaker to bring the Olympic spirit to your next meeting? Contact us to get started! You can also: