Our Inspiring Conversation With Ben Saunders 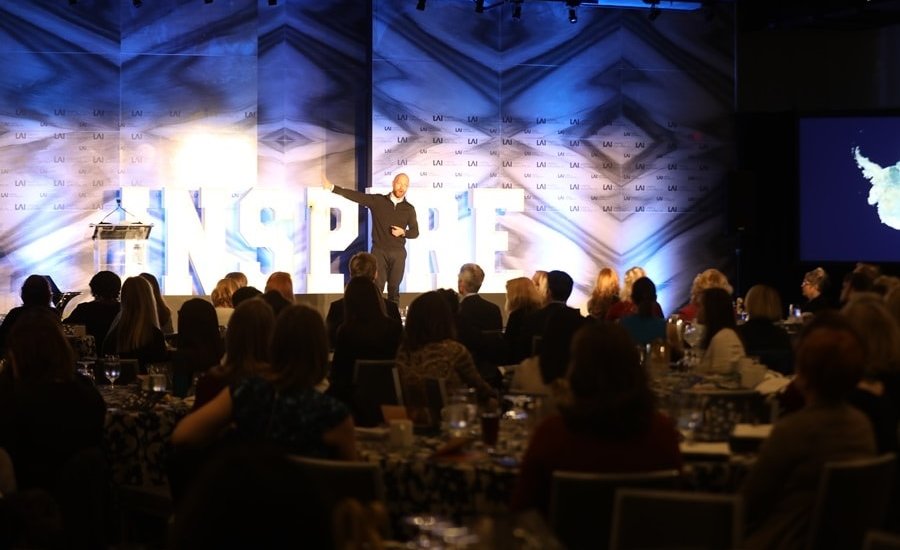 One of the world's best-known adventurers and a three-time TED speaker, Ben has been dubbed a "Master Storyteller" by TED owner, Chris Anderson. Freshly back from a grueling journey in the South Pole, where he completed a solo, unaided exploration from the edge of Antarctica (and documented it all on social media), Ben kicked off the Inspire conference by telling a packed audience about his latest trek. With his characteristically fantastic visuals and breath-taking stories, he described how he just about dodged the deep, deep crevasses, navigated the whiteouts and struggled through the sastrugi, as well as detailing the particular effort, determination, and perseverance required to climb the Wujek Ridge.

During his talk, Ben enthralled the audience as he explained why “Impossible is just someone’s opinion," and “Self-belief is like a muscle, the more you stretch it, the stronger it gets.” He left the audience inspired to push past what they perceive to be impossible, challenge the best version of themselves, and infuse their lives with a daily sense of purpose.

Do you have a mantra to help you push through the tough or lonely times when you are out there all alone?

Not really is the answer. I mean, I’m ashamed to say swear words are used a lot when things are tough. Normally cursing myself and my decision to ever think that this was a good idea. I think if anything, when things are genuinely tough, and there have been some tough times. I skied solo to the North Pole in 2004. NASA described the conditions as the worst since records began. There were days when I’d fall over and that happens the whole time because the North Pole is pack ice. You’re skiing over the frozen surface of the sea so the ice is kind of fractured and broken up and you’re falling over the whole time. Often, I’d fall over and I’d land in this entangle of ski poles and ropes and sled on top of my legs and several times I felt, secretly I felt a little bit disappointed that I hadn’t injured myself badly enough to call for a rescue flight with my pride intact. There were times when it was so tough that I was wishing, hoping for a broken wrist or a fractured ankle or something that meant I could quit you know and still feel good about myself. There were times when it seems utterly hopeless. I think I’ve learned over the years to try to reframe things and often almost give myself permission to quit. But I say ‘Well I’m not going to stop here, I’m going to stop there. Cause that bit of ice looks good, you could land a plane there so I’m going to get there’. I’d focus everything on getting to that point. I’d get there and I’d think ‘Well that wasn’t too bad I haven’t collapsed yet. Maybe I won’t quit here, maybe I’ll quit there’ and I’d do another hour and that’s how I got through the worst days so kind of breaking these things down, these giant really intimidating goals to manageable chunks is key.

You talked about “radical frankness”. Do you still use that in your life? Examples of how that works in everyday life?

What qualities do you look for in a teammate? How do you push another person when you’re mentally exhausted?

‘Tatako?’ was kind of a dream companion in many ways. I guess I look for, often kind of a lack of ego, I’m trying to give a better term, but kind of humility that often comes from vast experience. I look for that, I look obviously look for experience, I look for a decent resume and a track record because my life is going to be in their hands at times and vice versa. So yeah humility is a big one, willingness to fail. I think looking back I’ve had a dozen expeditions now in many ways each one has been a failure. I’ve never achieved every single thing that I’ve set out to achieve with each trip so I’ve kind of learned over the years that it’s taking that willingness to fail publicly and at the highest level aiming as high as I can in the niche that I’m focused on, it’s taking that ability to kind of fail again and again and keep aiming as high as I can to genuinely rewritten the book in the field that I work in. I think someone who is willing to do that as well, to kind of put everything out there on the line and try with no guarantee of success, that that’s key.

You recently did your trek solo. Why did you choose to go solo and do you think ‘Tarik?’ was disappointed not to go along?

He sent me an email when I first announced it saying “You’re either very brave or you’ve got a very short memory.” I went solo not because I’m a sort of raving sociopathic loner, I don’t think so anyway. But more because I saw that as the sort of highest rung of the challenge ladder. It’s an extraordinary test of self-reliance and crucially had never been done. A team of two had been all the way across Antartica, unsupported, on foot but no one had done it on their own. It was an interesting world-first. It’s also another huge paradox because the more isolated I am and the more remote I am physically, the more reliant I am on the team in the background, on the lines of communication, on how we communicate as a team. There’s a surprising element of teamwork and communication and leadership in these solo trips as well.

Since adventures like this don’t happen every day how do know what kind of equipment you need and is it readily available? What kind of innovation is necessary?

I spend a lot of time researching, preparing and talking to people who have done similar kinds of expeditions. There is a surprising degree of collaboration between fellow explorers.

What changes have you seen to Antarctica from climate change?

This was the warmest year I've experienced and the sastrugi suggests that the weather in the winter is also changing.

Your most recent trek was a solo one, why not bring a team? Was your buddy bummed to miss out?

The journey I was attempting had never been done solo.

Most efficient way to travel over that terrain. Definitely faster than walking!

How much of you haul was technology and power sources?

Less that 3% of what we were hauling - most of this was food and fuel.

You didn’t restock supplies at the base?

No, that wasn't the plan. We were attempting to haul all of our own supplies and didn't expect the weather conditions to turn on us which slowed our progress and stopped us getting to our first cache of supplies.

To learn more about Ben or check his availability and fees for an upcoming event, call us at 1-800-SPEAKER or live chat with a member of our team right now.

To get a better feel for what we covered at our Inspire conference, catch up on anything you may have missed, or learn more about the motivational speakers featured in our lineup:

• Check out our favorite moments from the event, including presentation and Q&A recaps from each of the keynote speakers

• Subscribe to the Leading Authorities' podcast, Speaking Of, and listen to the podcast episodes we recorded with our Inspire speakers