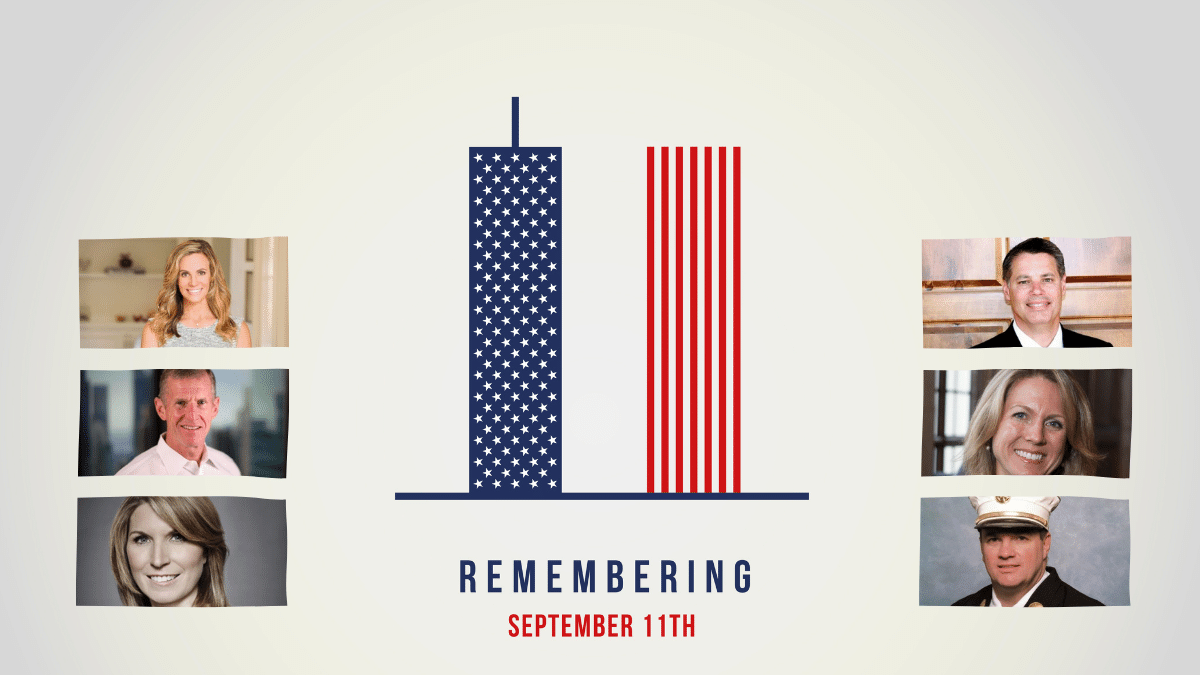 Twenty years have passed since September 11, 2001, the day that changed America forever. Since then, we continue to honor and remember those affected by the tragedy, as well as reflect on the events of that day and their long-term impact on our country and the world.

At Leading Authorities, we’re honored to work with these speakers who share their first-hand accounts of 9/11 and its aftermath, as well as look at how the devastating occurrences of that day continue to shape our society today and in the future.

One of former President George W. Bush’s aides, Nicolle Wallace was inside the White House as the 9/11 attacks were happening. She reveals how, after the third plane crashed, the Secret Service instructed everyone to evacuate and advised the women to take their heels off and run as far away as possible. She did just that, later returning to the White House to gather her communications team members and bring them to the safety of her nearby home. Nicolle gives listeners a rare look behind the gates and into the White House on 9/11 and in the days that followed, giving her perspective on the response to the attacks and sharing impactful stories from the families of those affected directly by the events.

As the U.S. prepared for battle following the 9/11 attacks, Gen. McChrystal was appointed chief of staff of military operations in Afghanistan and delivered nationally televised Pentagon briefings about military operations in Iraq two years later. Regarded among the greatest leaders of our time, Gen. McChrystal looks back at 9/11 and reveals the lessons about leadership in crisis that it taught us. He discusses how we redesigned the ways we communicate and make decisions in order to emerge from one of the darkest moments in our country’s history and how those same lessons can help us emerge from the challenges we face today.

President, The Brookings Institution; Former Commander of NATO and U.S. Forces in Afghanistan; Former Senior Advisor to the Secretary of Defense for Middle East Security; Former Presidential Special Envoy to the Global Coalition to Counter ISIL

General John Allen is one of the nation’s most legendary military leaders who is widely hailed as a true battlefield icon. When speaking about the events of 9/11, he recalls being a deputy commandant at the U.S. Naval Academy 30 miles from Washington, D.C. and how his worst fears came to be upon the realization that what he thought was a terrible navigational error was actually an attack on the U.S. He lets audiences in as he relives the moments where he came to understand that America’s future had just taken a new course, as well as his subsequent commanding of military operations in the Middle East.

Most widely recognized for her service on September 11, Heather “Lucky” Penney shares her heroic story of the 9/11 Flight 93 Kamikaze Mission. Without any live weapons on board her aircraft, she and her flight lead were scrambled to ram Flight 93 to protect Washington, D.C., only to find that the passengers on Flight 93 had overcome the terrorists and crashed the airliner. Reflecting on her experiences on 9/11, Penney offers a vision of hope, community, and connection for our nation’s future as an alternative to the fear and trauma that has consumed our collective consciousness.

Only 20 people who were still inside the Twin Towers when they collapsed made it out alive, including Chief John A. (Jay) Jonas, now a Deputy Chief in the New York City Fire Department. On September 11, 2001, Chief Jonas was the Captain of Ladder Co. 6 and was one of the first responding units to the World Trade Center. He and his unit were rescuing a woman from the north tower of the World Trade Center when it collapsed on them. They survived the collapse and their entrapment and lived to tell the extraordinary tale of heartbreak and bravery. Chief Jonas was selected as the official representative from New York City Fire Department in attendance at President Bush's address to the nation at The U.S. Capitol Building following September 11. He now shares incredible survival stories while highlighting public safety improvements made post-9/11.

Retired Air Force One Pilot Who Piloted During 9/11

Lieutenant Colonel Todd Beer piloted Air Force One during the Clinton and George W. Bush administrations and the terrorist attacks on September 11, 2001. Relaying the events of 9/11, he describes what he and the President did in the immediate aftermath of the attacks and how they had to handle the misinformation they were receiving as everyone scrambled to understand what had happened on the ground. Beer also elaborates on the process of trying to plan, problem solve, and fly the President to safety and how he and the crew ensured that they were not a target in the sky (or on the ground).

As the former counselor to former President George W. Bush, Bartlett was responsible for all aspects of communications planning, policy formulation, and agenda implementation under his administration. Among his most challenging undertakings was playing the lead role in launching a global communication strategy as the U.S. responded to the 9/11 attacks. As one of the few people by President Bush’s side as the attacks occurred, Bartlett shares unparalleled anecdotes from that infamous day and how America’s role in the international community was redefined in the fallout.

Award-winning journalist and producer Peter Bergen is one of the nation’s foremost authorities on foreign policy, national security, and the new generation of terrorism that threatens the West and its economic interests. Author of the New York Times best-seller Manhunt: The Ten-Year Search for Bin Laden – From 9/11 to Abbottabad, the book was named one of the “Best Non-Fiction Books of 2012” by the Washington Post and made into an Emmy-winning HBO documentary. Two decades after 9/11, Peter Bergen considers exactly how the attacks on New York and Washington changed America and the world – what the continuing legacy of 9/11 will be in the United States, Europe, the Middle East, and Asia – and the likely evolution of terrorism in the next decade.

A trailblazer who became the first female Army Reserve officer to become Ranger qualified, Jaster was deployed in support of Operation Enduring Freedom I in Afghanistan following the 9/11 attacks. She draws from her experience fighting as part of the war on terror overseas to emphasize the importance of perseverance and camaraderie in the face of difficult times. In her emotional speeches, she shares how she drew strength from family and how she discovered what leadership really means

Tracy Walder worked as Staff Operations Officer (SOO) for the CIA’s Counterterrorism Center Weapons of Mass Destruction Group. Using lessons-learned from her tenure in the CIA and FBI, along with insider anecdotes from meetings with President Bush in the 9/11 war room to hiding in the trunks of cars through the Middle East, she offers her unique perspective of a woman in the male-dominated field of special operations. Spending four years in the CIA’s Counterterrorism Center Weapons of Mass Destruction Group during the era of 9/11, Tracy Walder draws on her experience tracking terrorists worldwide, interrogating suicide bombers, and gathering life-saving intelligence to help audiences better understand the current threat landscape.

As a veteran political correspondent, the unusually wide-ranging scope of Kelly O’Donnell’s assignments have taken her to all 50 states, 58 countries, and the hotbeds of the 9/11 attacks at Ground Zero and the Flight 93 Pennsylvania crash site. For years, O’Donnell has brought events both historic and tragic into audience’s homes, showing a unique ability for making people feel the story through the television screens. She speaks with insight about her experiences covering defining moments in our lifetime, including the events of 9/11 and how they reshaped our society.

Larry Pfeiffer is a Managing Director at The Chertoff Group, where he advises the Firm’s clientele on the current risk environment while helping them better understand the policy and program impacts arising from today’s threat vectors. He played an instrumental role in the reforms following 9/11 the redefined the leadership of the Intelligence community. He brings crisis management, intelligence strategy, and cybersecurity expertise to discuss the most pressing matters in national security today.

Commander of American & NATO Forces in Afghanistan from 2016-2018

The 9/11 attacks set the course for the next 20 years of four-star General John Nicholson’s highly decorated, four-decade military career. It began with his office at the Pentagon being destroyed by a hijacked airliner and culminated with him being the longest-serving commander in the Afghan theater of war upon his retirement. Gen. Nicholson reflects upon 9/11 and the subsequent years fighting terrorism in Afghanistan’s treacherous mountain regions, bringing heart-pounding stories and lessons that leave a lasting impact.

Four-Star Admiral James “Sandy” Winnefeld is the immediate past vice chairman of the Joint Chiefs of Staff, the second highest-ranking officer in the entire United States Armed Forces. He was one of the Navy’s best pilots before taking on larger leadership roles and commanding at every level, including serving as an aircraft carrier commander during 9/11. During 9/11 he commanded the aircraft carrier the USS Enterprise, and under his leadership, it was one of the first to arrive in the theater of war. He draws from his experience on 9/11 to share advice for how leaders should think, operate, and innovate.

Book a Speaker for your Remembering 9/11 Event

If your organization is looking to honor the victims, hear first-hand accounts from people at the epicenter of the 9/11 response, or learn about the actions taken and policies created after the tragedy, we can help you find the right speaker. Contact us to get started.