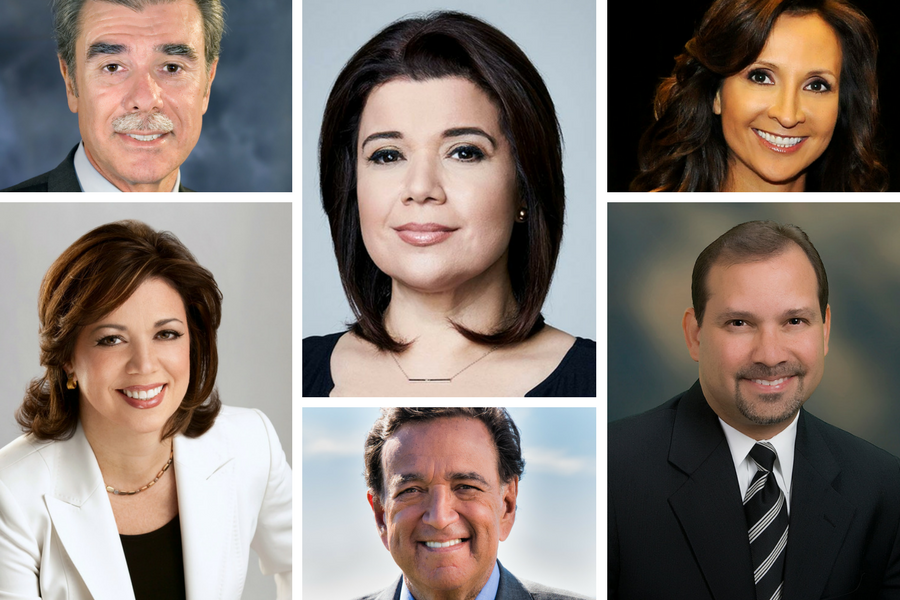 This is an excellent time to celebrate the accomplishments of leading professionals and important public figures with Hispanic roots. Leading Authorities speakers bureau is very proud to represent a myriad of exceptional Latino and Hispanic motivational speakers who have excelled in many different fields and can speak about Hispanic heritage and culture, the most important issues facing Hispanic and Latino Americans today, diversity, identity, and politics, among a myriad of other hot topics.

Our Hispanic keynote speakers come from many different industries and all have diverse backgrounds. From government and business to the media and business and more, these expert speakers are ready to share their unique experiences, compelling stories, and thoughtful insights with audiences around the globe. Their memorable messages inspire, motivate, and move event attendees and these individuals are a very popular choice for universities, conferences, and more.

In honor of this month and this month's events, we've assembled a list of our most talented and in-demand Hispanic and Latino keynote speakers for you to consider.

Keep reading to learn more about each of these popular Hispanic keynote speakers below and click on their names to visit their individual speaker profile pages for even more information on their speaking topics and watch their speaking video footage from recent keynote talks to get a preview of their speaking style.

Editor & Publisher of Inside Elections with Nathan L. Gonzales and CNN Political Analyst

Nathan Gonzales is the editor and publisher of Inside Elections with Nathan L. Gonzales, which provides non-partisan analysis of political campaigns for US Senate, House, Governor, and President. He was an editor, analyst, and writer for The Rothenberg Political Report for more than 13 years before taking over the company in 2015. He shares a detailed, highly-nuanced analysis of the current condition of electoral politics and offers audiences some of the most detailed electoral forecasting in the business. A CNN political analyst and can regularly be seen on many of the major news media outlets discussing the latest in politics, including NBC’s Meet the Press and NBC Nightly News, C-SPAN’s Washington Journal, CNN, and Fox News Channel. His work has also been featured on FiveThirtyEight, WashingtonPost.com and NBCLatino.com, and in Campaigns & Elections magazine. For a detailed, highly-nuanced analysis of the current condition of electoral politics, consider Nathan Gonzales for your next legislative meeting. | See more on Nathan Gonzales.

A seemingly “ordinary guy,” Ruben Gonzalez wasn’t a gifted athlete. He didn’t take up the sport of luge until he was 21 years ago. Against all odds, he was competing in the Vancouver Winter Olympics only four year later. As a four-time Olympian and internationally-recognized expert on developing mental toughness, Ruben knows how to achieve success again and again. A master storyteller, Ruben uses his Olympic experiences to inspire audiences to think differently, live life with passion, and have the courage to take the necessary steps toward their goals—to push beyond self-imposed limitations and to produce better results. | See more on Ruben Gonzalez.

Bill Richardson has had more than 30 years of US government experience and has held many different high-level leadership positions across the government, private, and not-for-profit sectors throughout his successful career. Richardson is the former two-time Governor of New Mexico, serving from 2003 to 2010, he was appointed US Ambassador to the United Nations and Secretary of Energy by President Bill Clinton, and he is well known as the person who secured the release of hostages in Cuba, Iraq, Sudan, and North Korea. Since leaving his government position, he is a nationally and internationally-recognized keynote speaker, serves on numerous public- and private-sector boards, is an MSNBC-Telemundo contributor, and consults for various energy and technology companies in the US and overseas. He is also a frequent contributor for numerous major network news programs, including Meet the Press and This Week with George Stephanopoulos. Since 2010, Richardson has operated the Richardson Center for Global Engagement, a foundation focusing on conflict resolution, prisoner release and environmental protection. Bill has also been nominated for the Nobel Peace Prize four times for his work, is the founder of the Foundation to Protect New Mexico Wildlife, and has won several domestic and international leadership awards. | See more on Bill Richardson.

Former US Secretary of Commerce & Former CEO of Kellogg

Carlos Gutierrez is the former US Secretary of Commerce and former CEO of Kellogg who was named one of the most powerful Hispanic-Americans in business and “The Man Who Fixed Kellogg” by Fortune magazine. This Hispanic motivational speaker serves on the US-Cuba Business Council, which works to strengthen the commercial and economic relationship between Cuba and the US. | See more on Carlos Gutierrez.

Leslie Sanchez is a respected author, political strategist, and the former executive director of the White House Initiative on Hispanic Education under President George W. Bush. Since 2003, Leslie has served as a leader in public opinion research specializing in presidential and statewide elections as well as the women’s and Hispanic-Latino marketplace. She has spent her career at the forefront of predictive data analytics that shift opinion, shape policy and aid the decision-making process for Fortune 500 companies, universities and colleges, as well as global non-profit organizations. In her talks, she shares her personal insights on women working in politics, as well as opportunities and challenges that Hispanics face. She was named one of the nation’s “100 most influential Hispanics” by Hispanic Business Magazine, and was also named “Texas Power broker,” by the Houston Chronicle for being among the most influential Texans in Washington, DC. | See more on Leslie Sanchez.

An expert in navigating uncertainty, Deborah Rosado Shaw was raised in the nation's poorest congressional district, where gangs ruled the street corners and her biggest dream was about having heat and hot water. Along the way she discovered strategies for success that formed a bridge from tough inner-city beginnings to award-winning entrepreneur and F50 senior executive and consultant. In 2004, Deborah founded the Rosado Shaw Group, LLC., a consulting and advisory firm focused on intervening in today's complex challenges around culture, performance, talent engagement, and diversity. Since 1996, Deborah has delivered custom executive briefings, seminars, keynotes, and consulting to organizations that include Accenture, American Express, The Congressional Hispanic Caucus Institute, IBM, Microsoft, New York Life, PepsiCo, Sam's Club, Walmart, and many more. Participants range from independent professionals to fast-track high potentials, middle managers and global leaders managing billions of dollars in revenue and tens of thousands of employees. Recently, she served as PepsiCo's SVP, Chief Global Diversity & Engagement, where she was responsible for driving innovation and optimizing high-performance teams by leveraging the diverse strengths, backgrounds, and perspectives of 260,000 associates operating in 200 countries and territories. In this role, she built a multi-million dollar company that made the “Top 50 Hispanic Women-Owned Companies” list. Shaw has been recognized with several prestigious awards, including the SBA sponsored "Women of Enterprise Award", the National Foundation of Women Legislators "Entrepreneur of the Year" award, the Students in Free Enterprise "America's Free Enterprise Legend Award," “Entrepreneurial Excellence Award,” and “Hispanic Businesswoman of the Year.” Additionally, Hispanic Business Magazine named Shaw one of "80 Elite Women Leaders" and Hispanic Magazine has several times listed her as one of the "100 Most Successful Latinas in the US". She also joined the ranks of Billie Jean King and Madeline Albright to receive the "Office Depot Visionary Award". | See more on Deborah Rosado Shaw.

Raul "Danny" Vargas is an American businessman, US Air Force veteran, media personality, and a political activist who served as the chairman of the Republican National Hispanic Assembly from 2007 to 2009. Danny is the founder and president of VARCom Solutions, a nationally-recognized, Washington, DC area-based marketing, public relations, and management consulting firm, and has experience serving as a senior executive for several name-draw companies, such as AOL, Global One, France Telecom, and more. Danny is a well-known and widely-respected leader in business, politics and the Hispanic community. He is a regular media commentator on politics, business, and international affairs, appearing regularly on Fox News, CNN, MSNBC, Univision, Telemundo, PBS, and other media outlets (speaking in both English and Spanish). Danny maintains a unique access to key media, political, and community figures at the national and regional levels. Danny’s varied background make him an ideal speaker or moderator for a variety of situations and his media expertise provides him a keen ability to ask insightful and thought provoking questions. He inspires audiences with his rags to riches story of overcoming adversity in the slum of Brooklyn. making his keynote presentations, panels, and debates meaningful and memorable. Danny also discusses the future of the GOP amidst the demographic shift happening in America and the importance of connecting with Hispanic markets, which is the largest ethnic group in the country, stressing that successful Hispanic market engagement can make the difference between winning and losing for businesses, political campaigns, agencies, and organizations. A noted national leader in the Hispanic community and a renowned marketing executive, Danny lets you in on the best tips to reach this coveted demographic as well as little known ways to understand the uniqueness of this vital market segment.| See more on Raul "Danny" Vargas.

Brian Solis, is the prolific author of the book, The End of Business as Usual, was named a “Top 10 Business Book” by Publisher’s Weekly. He was named to Silicon Valley’s “40 under 40” and called one of the “25 Twitter Accounts That Will Make You Smarter” by Mashable. In his keynote presentations, reports, and best-selling books, Brian sets out to humanize technology's effect on industries, markets, and people. He helps organizations understand and embrace the dynamics defining the rise of social business. His current research and speaking topics provides leading—and approachable—insight into a variety of top business trends, such as digital transformation, disruptive technology, disruptive corporate innovation, customer experience design, corporate culture 2.0, social media, the future of business industries/markets, tech, and human behavior. | See more on Brian Solis.

Celebrate Hispanic and Latino heritage, culture, spirit, and accomplishments made in America, and book your Hispanic Heritage Month keynote speaker today with our Latino speakers bureau!

These speakers are involved with the Smithsonian Institution, the Pew Research Center, public affairs, presidential proclamations, the National Archives, the annual proclamation, natural resources, law enforcement, the Library of Congress, National Park, and many other institutions.

At Leading Authorities speakers bureau, we take a client-focused approach to discovering the perfect speaker for your unique event. Our industry veterans, who have more than 20 years of experience, are committed to helping you plan the perfect event.

If you have an upcoming event or event where one of these great Hispanic motivational speakers could be a good fit, contact us today.

We learn about your budget, theme, objectives, stakeholders, audience, and other key factors that set your event’s tone and shed light on what kind of speaker will resonate with your attendees and accomplish your goals. With our recommended list of Hispanic motivational speakers, you can pick the one you want and know they’ll bring the house down.

To get started, you can either fill out the form below, email us, call 1-800-SPEAKER, or live chat with a member of our team right now.