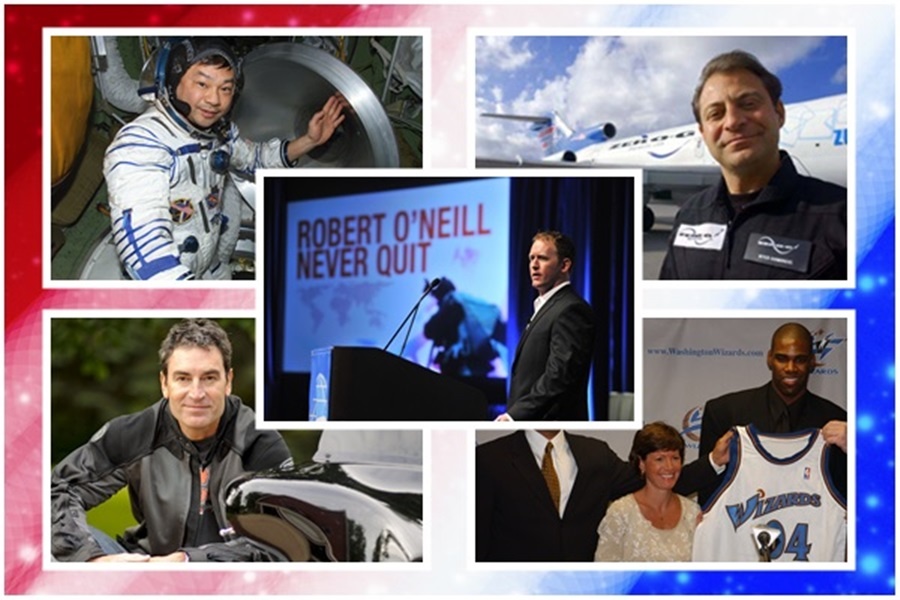 What do a Navy SEAL, Harley-Davidson Communications Director, an astronaut, an NBA President, and an entrepreneur all have in common? They’re all representatives of leaders from great American brands, and they all give captivating speeches, drawing upon heroism, competitiveness, exploration, pioneering, and innovation.

If you need an American hero, you’d be hard-pressed to find a better example than Robert O’Neill, one of the most highly-decorated veterans in modern times. A former Navy SEAL and two-time Silver Star recipient, Rob led the elite of the elite in the military, serving more than 400 combat missions. His presentations focus on decision-making, leadership, and how to become the “best of the best.”

Harley-Davidson is one of America’s most recognizable brands, and Ken Schmidt, its former director of communications, is one of the country’s most in-demand speakers. Ken helped to make Harley what it is today, one of the most visible and frequently reported-on companies in the world. As a speaker, Ken “[exposes people] to proven ideas and concepts they’ve never imagined,” with a focus on competitiveness, corporate culture, and creatively reaching new customers.

It’s not often you find a motivational speaker who has literally lived in space, but that’s exactly what you’ll get in Leroy Chiao, a renowned American astronaut and International Space Station commander. Leroy has a broad technical expertise that allows him to share compelling insights on future technology and innovation during presentations that are full of breathtaking photos and awe-inspiring stories of his four space missions.

Susan O’Malley is a pioneer in two fields, serving as the first female president of a pro sports team before becoming the president of the Washington Sports and Entertainment, where her ground-breaking business ideas quickly brought her to the peak of the sports business world. Susan, a hilarious and brilliant speaker, presents on leadership and how to thrive in a male-dominated environment.

Creating an organization with a goal “to bring about radical breakthroughs for the benefit of humanity” sounds like something from a futuristic movie, but it’s present-day reality thanks to Peter Diamandis, the founder and chairman of XPRIZE. Using gripping stores from his New York Times best-seller, Peter shares stories of innovations that are changing the way we think, work, and educate future generations. His presentations address technology and how to spur innovation, using the motto: “The best way to predict the future is to create it yourself.”

Thanks for checking out these stellar speakers. Let me know if I can check their availability for you, or if I can provide more info.