The Speakers You’re Going To Get Asked About This Fall 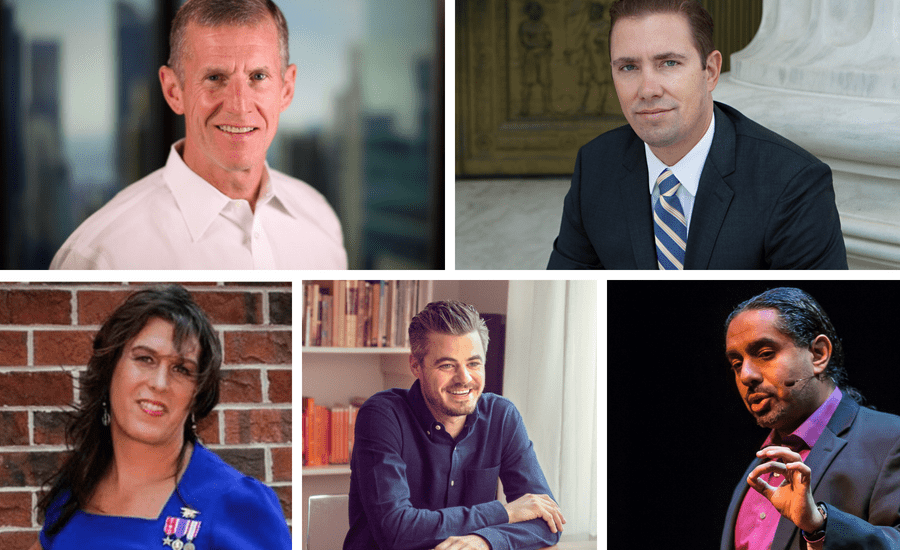 We are constantly talking with clients and fielding requests our meeting planners are getting from committees and senior leadership teams. As you plan your Fall 2018 events, here’s a helpful list of questions you may get asked and speakers you could propose if you find yourself sourcing speakers like these.

Former Commander of US and International Forces In Afghanistan & Best-Selling Author of the Book, Leaders: Myth and Reality

Stanley McChrystal is the world’s leading mind on this transformative organizational change. He developed this model as the Commander of US and International Forces in Afghanistan. It was the only organizational structure capable of combating al-Qaeda’s always shifting and non-traditional style.

Former Director of Communications Strategy at Harley-Davidson & Author of the Book, Make Some Noise: The Unconventional Road to Dominance

As the former director of communications for Harley-Davidson Motor Company, he played an active role in one of the most celebrated turnarounds in corporate history – and got paid to ride motorcycles. He is widely known as one of the business world’s most outspoken and provocative thought leaders and has partnered with many of the world’s most successful brands.

The Pulitzer Prize-Winning Journalist Who Broke The Watergate Scandal & Author of the Book, FEAR: Trump in the White House

World-famous for first breaking the Watergate Scandal, Woodward is a two-time winner of the prestigious Pulitzer Prize and the Associate Editor of The Washington Post. He is widely regarded as one of the most impressive political journalists of the day. Woodward' will be releasing his new book, FEAR: Trump in the White House, detailing the "harrowing life" inside Donald Trump's White House on September 11th, right before the November midterm elections. The highly-anticipated book draw's on the hallmark approach that made Woodward a household name. He spent 19 months quietly researching and reporting on life inside the White House, slowly sketching a real-time masterpiece on this American presidency's style. In doing so, he has brought to light the unique approach this Administration is taking to decision-making in the Oval Office, the Situation Room, Air Force One, and the White House.

IF YOU GET ASKED, “WHO’S NEW TO THE LECTURE CIRCUIT?”

Awarded more than 50 ribbons and medals during her 20 years of service including the Purple Heart, Kristin shares her inspiring and motivational story and imparts lessons on acceptance, diversity, leadership, and determination. She is a well-known civil rights and LGBT rights activist and was a key voice in the Congressional Bill to end discrimination towards the LGBT community.

Margaret Brennan has reported on politics, international affairs, and global markets for nearly two decades. Brennan focuses on offering a fact-based review of the day’s biggest ongoing news as well as breaking stories, and draws on her extensive global experience to provide an unbiased, big-picture look at the issues that matter now.

Annie Duke is a former World Series of Poker Champion and an expert on risk and decision-making.  Annie teaches audiences to embrace and make the most of uncertain times and is the author of the new book, Thinking in Bets: Making Smarter Decisions When You Don’t Have All the Facts. Annie gets into the behavioral science of good and bad decision making, using poker as an analogy for success and failure in life because sometimes the best hand loses and other times the worst hand wins.

IF YOU GET ASKED, “WHO’S GOT A GREAT MOTIVATIONAL STORY THAT’S RECENT?”

Shon Hopwood is an Associate Professor of Law at Georgetown University Law Center, where he is an expert on federal courts, criminal procedure (including federal sentencing), and prisoners’ rights. Shon’s unusual legal journey began not at law school, but federal prison, where he learned to write briefs for other prisoners.

Retired Marine Sergeant and Paralympic Bronze Medalist, Rob Jones’ life is synonymous with fearless perseverance. In 2010, he was struck and injured by a land mine, resulting in a double above-the-knee leg amputation. Despite the trauma, Rob’s incredible spirit remained intact and he set about devising a new pathway to his unchanged goal: A life filled with purpose and meaning.

IF YOU GET ASKED, “WHO’S CHANGING THE WORLD NOW?”

Today, Scott Harrison is known for remaking the concept of charity through his revolutionary non-profit Charity : Water. But in his 20's and early 30's, Scott was a club promoter in New York living what he has called an empty life. Tired of his dispassionate existence, Scott left the world he knew to launch Charity : Water and hasn’t looked back since. In speeches he talks about how he made that 180-degree turn, how he motivated himself past naysayers and near bankruptcy, and why getting to know your values can be the secret to reinvention.

Dr. Geoff Tabin’s revolutionary model in eye-care has restored sight to two million people globally by taking a surgery that formerly cost $200 and reimaging the medical process. He now completes it in third world countries for just $25 per patient and has restored sight to hundreds of thousands. A recipient of the Dalai Lama’s “Unsung Hero of Compassion” award, he was recently featured in a 60 Minutes profile; take a look. Geoff talks about chasing impossible dreams, reimagining problems to create solutions that change the world, and how to know when to persevere and when to pivot.

IF YOU GET ASKED, ​​​​​​​“WHO’S AVAILABLE AND SPEAKING FROM ONE OF THE BIG TECH GIANTS?”

Currently a Singularity University co-chair, Ramez Naam offers a fast-paced presentation on technology disruption and reviews the “8 Things Disruptors Do,” leaving audiences with practical takeaways on innovating from the bottom up, giving your team permission to fail, capitalizing on the network effect, riding the wave of disruption instead of fighting against it, and more.

Dex provides a personalized, high-level overview of the technology mega trends transforming businesses plus predictions for what will be important in the next 5 years. With unbelievable anecdotes of his time working directly with Mark Zuckerberg and Elon Musk, he talks about the ways technology is changing how we communicate with one another, with elected officials, and with other nations.

Adam Sharp was Twitter’s first Washington, DC employee, tasked with growing the platform into the news powerhouse it is today. He was also the longest-serving member of Twitter’s global media partnerships team and the brand’s most visible spokesperson. He talks about the impact of technology on incumbent industries and how to take advantage of new media to stay relevant and get ahead.

To learn more about these speakers, or to check their availability and fees for an upcoming event or meeting, reach out to our team.

To contact us, you can also fill out the form below, email us, call 1-800-SPEAKER or live chat with a member of our team right now.