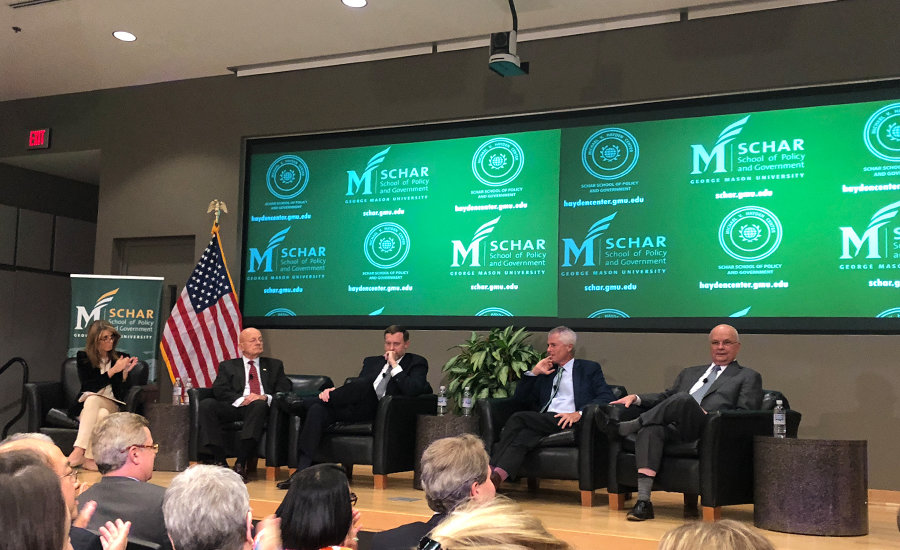 On Tuesday, September 11th, 2018, a panel of distinguished and highly-respected former national intelligence officers convened at George Mason University’s Michael V. Hayden Center at the SCHAR School of Policy and Government to discuss the relationship and dynamics between President Donald Trump and the intelligence community (IC) and deliberate key intelligence issues. The event was extremely well attended, in fact there were so many people who RSVP'd that they had to add another  "overflow room," which was also full.  And we’re thrilled to share that the entire panel consisted of Leading Authorities' exclusive speakers.

Their collective wealth of knowledge on intelligence and national security issues brought new light to some of the most critical discussions going on in our country right now.

Wallace asked the panel a variety of questions all focused on the current state of the US intelligence community. The focus was what their respective roles should be as former high-ranking officials with large media platforms in relation to long standing precedent of remaining quiet after leaving the government. They all voiced concern over the current reputation of the intelligence community, and the corresponding potential for harm to the country because of this break down in public trust. The discussion touched on several related topics and got to the heart of the difficult path moving forward for both retired high-ranking officials regarding their public profile, and the intelligence community as a whole.

Another prominent focus of the panel was the ongoing debate over Russian interference in America’s elections, and what it means for future elections. As career intelligence and military experts, these intelligence speakers were all quite concerned over the recent developments and the challenges facing the intelligence community moving forward. They all agreed with Wallace’s assertion that the special counsel’s investigation is warranted and necessary for our government to get to the bottom of this matter. They also voiced concern over the aggressiveness demonstrated by the Russian government, and a lack of condemnation from the White House. With their acknowledgement of concerns over what happened in 2016, they also expressed grave fear for the type of deep dissension the Russians seek to sow within the United States. They all expressed concern that the deep political division within our country is increasing, and that there is no clear message on how to deal with the Russians in the coming years as a result.

Despite the grim picture painted by this discussion, these speakers still hope that faith can be restored in our American institutions. They claim that these institutions must be viewed as apolitical and seek to serve the American public the way they were intended to. Our nation’s intelligence community must be relied upon as a guiding force in an increasingly divisive world. The way they have been negatively characterized deeply concerns each member of this panel and has given them all a call to action. Their instinct to be leaders in a time of crisis has called them to abandon precedent and act in their countries best interest.

BRING A TOP INTELLIGENCE OFFICIAL TO YOUR EVENT

Since leaving office across the last few years, these four senior intelligence experts have quickly become some of our most popular keynote speakers addressing the latest global trends, geopolitical issues, and cyber security threats. Drawing on the decades and decades of experience, these former high-ranking military intelligence officials know what’s going on in every corner of the globe and on the web and they can break down the hot-button issues of the day including the scope of the Russia threat, election meddling, and cyber attacks, among others, and offer their top-level insights paired with edge-of-your-seat storytelling on these issues.

If you’re looking for an expert to deliver a White House-caliber briefing on the hottest geopolitical, cyber, intelligence, and national security headlines in the news today, please consider booking one of these legendary intelligence operatives. Each of these highly sought-after speakers are great individually, as part of a “big picture” series, or on panels addressing intelligence, cyber security, geopolitics, or national security.

To learn more about each of these former top intelligence officials, check out each of their individual speaker profile pages by clicking on the hyperlinks above.

Want to check any of these intelligence expert's speaking fees or availability for an upcoming speaking engagement? Ready to book one of these speakers for your next event or meeting? Contact our team today!

You can also fill out the form below, send us an email, call us at 1-800-SPEAKER, or live chat with a member of our team online right now.