Top Moderators For Your Events 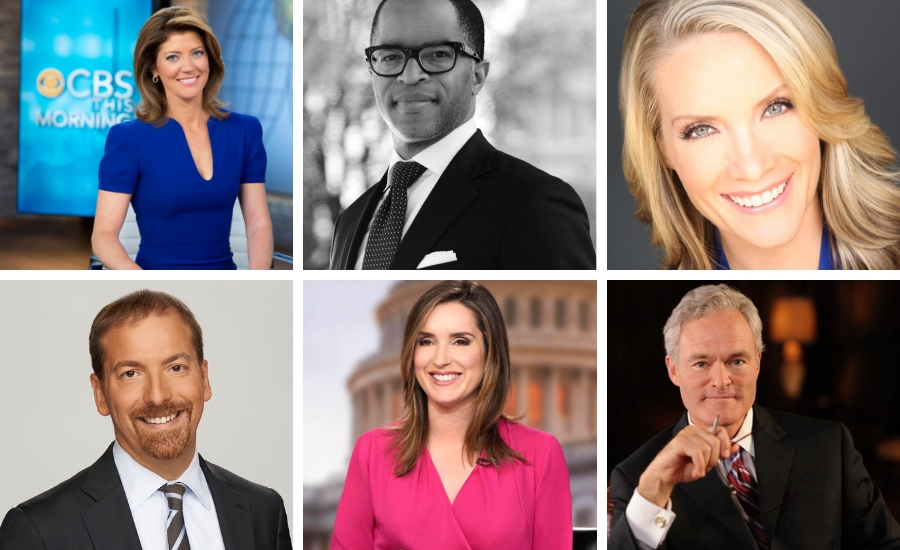 Are you searching for a moderator for your next event? If this is the type of speaker you may be looking for this year, we have a number of great options for you to consider.

TOP MODERATORS FOR YOUR EVENTS

Keep reading to learn more about each of these exceptional moderators and click on the links below to browse through each of their individual speaker profile pages and find out more about their speaking topics and expertise.

Scott Pelley is an award-winning 60 Minutes correspondent who offers rare insights gained from his more than 300 features on the show, having interviewed world leaders and covered major events – from childhood homelessness to genocide in Darfur. Pelley has received myriad high-profile awards, including 37 Emmys, and The Washington Times wrote, “The legacy of Edward R. Murrow lives in the daring investigations of Scott Pelley.” One of the most recognizable faces in journalism, Scott addresses current events and global issues.

Before joining Fox News Channel, Dana Perino served as the first Republican woman to be press secretary of the United States. Today, she is a revered political commentator and journalist known for formerly hosting her own program on Fox called The Daily Briefing with Dana Perino, as well as being nicknamed “The Voice of Reason” on the hit Fox News show, The Five, where she joins a panel of four other co-hosts to discuss the breaking news of the day and the latest stories capturing the attention of the nation. She is now the co-host of Fox's America's Newsroom.

As co-host of CBS This Morning, Norah O'Donnell breaks down the big news of the day and interviews some of the biggest names in politics, entertainment, and sports. She’s also the former NBC Chief Washington Correspondent and the former anchor for Weekend Today.

Moderator of CBS' Face the Nation

Margaret Brennan has reported on politics, international affairs, and global markets for nearly two decades. The moderator of CBS News’ Face the Nation, she is one of the most visible faces in political news today and only the second-ever female host of the 63-year-old program. Brennan aims to cover issues in a bipartisan way and offers fascinating anecdotes from her weekly interviews with the biggest faces in politics today.

Pulitzer Prize-winning journalist, Jonathan Capehart, is a renowned Washington Post writer and MSNBC contributor who breaks down the issues that will define the months and years to come. Jonathan is also a member of The Washington Post editorial board, writes about politics and social issues for the PostPartisan blog, and hosts the Post’s “Cape Up” podcast. One of the most-influential LGBT people in media today, Capehart is known for his thought-provoking commentary on the major political and cultural news items of the day, including the big issues at the heart of conversations about diversity and inclusion.

Mike Allen is the co-founder and Executive Editor of Axios. He formerly served as Chief White House Correspondent for POLITICO. At this year’s CES, Allen will sit on a panel talking about the intersection of technology and regulation, and how policymakers can help technology reach its potential without inhibiting innovation.

Co-Founder and CEO of Axios & Former CEO of POLITICO

Jim is the co-founder of Politico, one of Washington’s most entrenched political sites, and the co-founder of the brand new and already successful Axios. He talks about how media has evolved since his days working as a reporter for the Washington Post (before Politico), how that shift will play out in the midterms and future elections, and the things they’re doing at Axios to disrupt media.

From the White House to the campaign trail to the halls of Congress, Stephanie Cutter has been at the center of every major policy and political debate for the last two decades. A trusted advisor to America’s most powerful democratic leaders, she is the former Deputy Campaign Manager for Obama 2012. Cutter has an in-depth perspective to current political and policy debates, providing audiences with unique insights and analyses into competing strategies and potential outcomes on everything from the race for the White House and the biggest issues of the day.

Nina Easton is one of the world’s leading interviewers, Nina Easton helps CEOs, global leaders, and cultural icons communicate their vision and stories on stage. She is the Chair of Fortune Most Powerful Women International, and Co-Chair of Fortune Global Forum, staging events around world. With deep economic and political sophistication, she engages speakers and audiences to produce far-sighted conversations on how to navigate today’s hyper-speed, disruptive landscape.

Geoff Colvin is a prominent business broadcaster on CBS Radio and best-selling author. He offers a unique insight on the intersection of government and business while giving business leaders the tools to navigate through change and uncertainty. Colvin can provide audiences with a clearer path for an uncertain future and unpack actionable insights on the economic, market, political, and technological forces driving disruptive change.

BOOK A MODERATOR FOR YOUR NEXT EVENT

If you're interested in booking one of these engaging moderators for your next event or check any of these individual's speaking fees and availability, reach out to us to get started today!

Looking for more recommendations? Tell us more about your event and we can send you a customized list of speaker recommendations tailored specifically for your event's topic, theme, and audience. Request a custom speaker list.