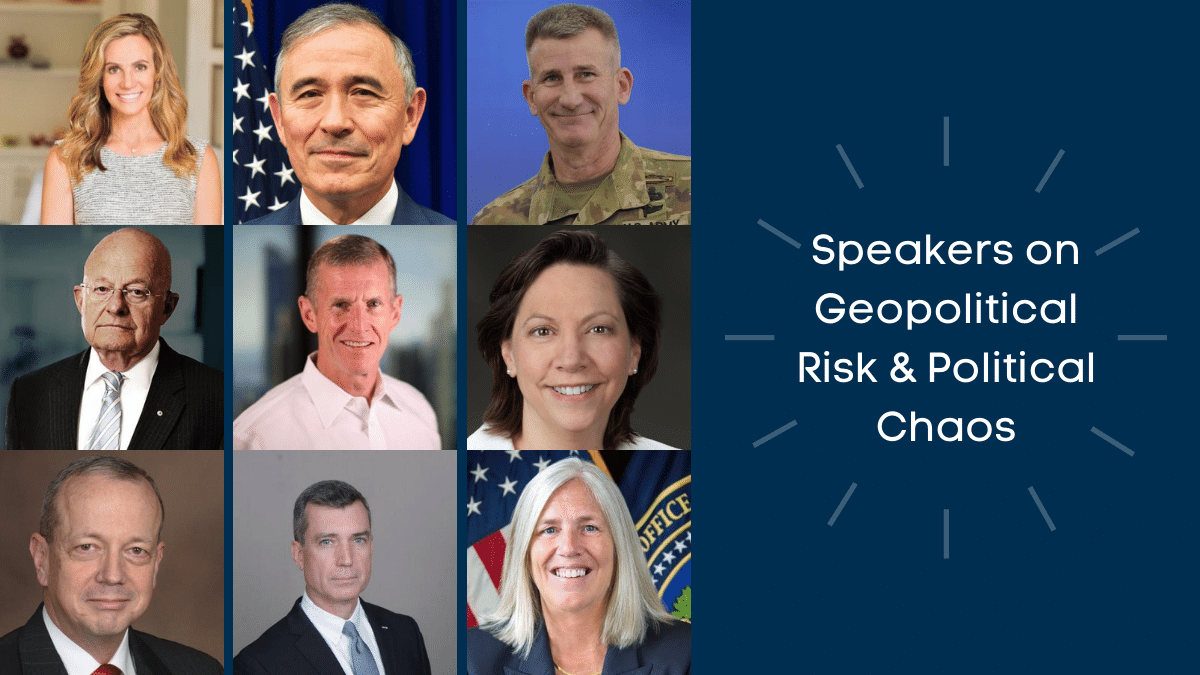 As the world continues to face geopolitical unrest — especially related to Russia's invasion of Ukraine and the events that have unfolded in the time that has followed. These speakers, with  backgrounds that span military, government, and private sector service, offer talks on understanding and managing geopolitical risk. Take a look at these insider speakers who help to explain the current geopolitical landscape and what these threats mean for you and your business:

Below are additional recommendations for speakers we work with who can share their expertise on a range of geopolitical threats — from Russia and Iran to terrorism and cyber warfare.

Read on for more information about these speakers and their specific topics:

Joel Brenner specializes in cyber security, US intelligence, and internal data investigations. His new book reveals the startling rate at which private data is leaked without prior knowledge regardless of current security measures. Not only individuals, but businesses and corporations are all affected. Through his extensive knowledge, Brenner reveals how this situation arose and what there is to do to stop it. His expertise is applied to operational and practical business strategy, guiding the way to insulate oneself from these very real threats. | Click to learn more about Joel.

Formerly the nation’s top intelligence official and principal intelligence advisor to the President, James Clapper is revered for both his encyclopedic knowledge of critical intelligence issues and his straight-shooting style. Having overseen the U.S. intelligence community through a period that included the bin Laden raid and the Snowden leaks, Clapper’s uniquely positioned to discuss the broad scope of threats facing American interests. | Click to learn more.

Michael Froman is an expert on trade and its effects on US global relationships. He was formerly President Obama’s chief advisor, negotiator, and spokesperson on trade and investment issues. Froman’s experience and insight has never been more valuable given the current emphasis on trade. He helps audiences understand America's new role in the global economy, as well as what the Trump Administration's stances on various trade agreements mean for businesses. Currently the Vice Chairman and President of Strategic Growth at MasterCard, he is perfectly positioned to provide businesses with a 360-degree overview of how our global relationships will evolve. | Click to learn more.

As the country’s number two ranking intelligence official, Sue Gordon oversaw the entire Intelligence Community (IC), witnessing firsthand the shift in cyber and national security that has come with the global accessibility of information. With over 3-decades of security service, Gordon explains the challenges facing the IC today and the need for innovation in order to keep up. Having just retired in October, she brings recent, high-level experience to every engagement. | Click to learn more.

The first-ever Asian American to attain four-star rank in the U.S. Navy and the highest-ranking Asian American in the Navy's history, Admiral Harry Harris provides sought-after expert analysis on geopolitical issues across the globe, especially related to North Korea, South Korea, China, Japan, Taiwan, India, Australia, and the Quad. As the former U.S. Ambassador to the Republic of Korea, Harris offers a compelling breakdown of American foreign policy and how today's issues could potentially reshape business and the economy. | Click to learn more.

Ambassador Douglas Lute is the former United States Permanent Representative to the North Atlantic Council, NATO’s standing political body. Appointed by President Obama, he assumed the Brussels-based post in 2013 and served until 2017. During this period, he was instrumental in designing and implementing the 28-nation Alliance’s responses to the most severe security challenges in Europe since the end of the Cold War. | Click here to learn more.

Former Commander of U.S. and International Forces in Afghanistan

Widely credited with revolutionizing warfare by fusing intelligence and operations, Gen. McChrystal provides insights on the current national and global state of political affairs in a manner that few others can. He leads a compelling session on the leading issues in today's dynamic geopolitical environment while analyzing trends, relationships, and the other factors at play, and outlines the potential implications on security, politics, and the global population.

Gen. Nicholson stepped down as Commander of U.S. Forces-Afghanistan and NATO’s Resolute Support mission in September of last year. An energetic, combat-seasoned voice on leading complex organizations to win, Gen. Nicholson is widely admired for his position as one of our nation’s greatest “Warrior-Diplomats,” and as the longest-serving commander in the Afghan theatre of war. Nicholson draws on his experience with large military units and allied coalitions in times of complexity and risk and provides lessons that are highly relevant to improving strategic thinking, strengthening results through collaboration and developing resilient colleagues who will thrive in today’s fast-paced global operating environment. | Click to learn more about John.

With an extensive background in national security, intelligence, and foreign policy, Dr. Kenneth Pollack is a resident scholar at the American Enterprise Institute (AEI) and an expert on Middle Eastern political-military affairs with a particular emphasis on Iraq, Iran, and Saudi Arabia. The author of nine books on the Middle East, he addresses foreign policy, international relations, and geopolitics, stressing economic, social, and educational change as part of the solution to the issues in the Middle East. | Click to learn more about Kenneth.

At the CIA’s Directorate of Digital Innovation, Sean Roche was responsible for modernizing and accelerating innovation across the entire agency with cutting-edge technologies and cyber intelligence. Discussing the current cyber landscape, Roche provides a thorough yet digestible analysis of the most pressing threats facing organizations today. His high-energy presentation and hilarious anecdotes straight from Washington will leave audiences at ease, providing manageable takeaways they can instantly implement to enact more secure processes. | Click to learn more.

As one of the only women to serve in both the Directorate of Operations at the CIA and as a special agent in the FBI, Tracy Walder traveled to war zones, black sites, the Middle East, Africa, Europe, and Southeast Asia and even helped take down on of the most notorious foreign spies ever caught on American soil. She speaks to emerging threats across the globe and offers high-level insights on the ways they might impact national security and foreign policy as she shares the latest geopolitical intel with her audiences. | Click to learn more.

Harry G. Broadman is a globally renowned international finance executive, private equity investor, trade negotiator, and authority on business growth, risk-mitigation, antitrust, regulation, corruption, corporate governance and innovation. Over the course of his career he's re-invented himself more than a handful of times—not only in an interdisciplinary fashion, but also across greatly differentiated senior roles in the private sector, interspersed with stints as a high-level international trade negotiator, policy maker, regulator and journalist. | Click here to learn more.

General Vincent K. Brooks is a career Army officer who recently retired from active duty as the four-star general in command of all U.S. Forces in Korea, where he concurrently commanded United Nations Command as well as the Republic of Korea—U.S. Combined Forces Command comprising over 650,000 Koreans and Americans under arms. Widely respected as a speaker and leader of cohesive, innovative organizations, within and beyond the military, his areas of expertise include leadership in complex organizations, crisis leadership, and building cohesive trust-based teams, national security, policy, strategy, international relations, military operations, combating terrorism and countering the proliferation of weapons of mass destruction, as well as diversity and inclusion. | Click to learn more.

Founder and Chairman of Geopolitical Features

Dr. George Friedman is an internationally recognized geopolitical forecaster, international affairs strategist, and New York Times best-selling author. As Founder and Chairman of Geopolitical Futures, a new online publication dedicated to forecasting the course of global events, Friedman combines his passion for writing and publishing for his readers world wide who follow international affairs. A very popular keynote speaker on the future of international geopolitics, Dr. Friedman has briefed for many major military and government organizations and is frequently invited to speak internationally. | Click to learn more.

Kevin Kajiwara advises Fortune 100 CEOs and significant institutional investors with insights on geopolitical and policy risks, and their investment and corporate strategy implications. He plays an active role in promoting the firm’s research agenda and developing its macro views, as well as integrating Teneo’s geopolitical advisory services across the platform. Prior to joining Teneo, Kevin was the director of Strategic Clients at Eurasia Group and a member of the firm’s Operating Committee. | Click to learn more.

A trusted advisor to the world’s top CEOs and business leaders, Erik Peterson draws from his extensive experience in global foresight to discuss current geopolitical events in Russia, Ukraine, and around the world, and share valuable insights on global economic and business trends, as well as how we might be impacted in this age of uncertainty. | Click to learn more.

Having held roles at the U.S. State Department and a premier private intelligence company, Peter Zeihan draws from his expertise in global affairs to provide a comprehensive breakdown of geopolitical issues in Europe, China, the U.S., and elsewhere in the world. Offering a preview of the issues that will drive tomorrow's headlines, he uses an approach that transforms complex subject matters and makes it engaging and understandable with takeaways for all audience types. | Click to learn more.

Are you interested in bringing one of these top speakers to the stage of your next event?