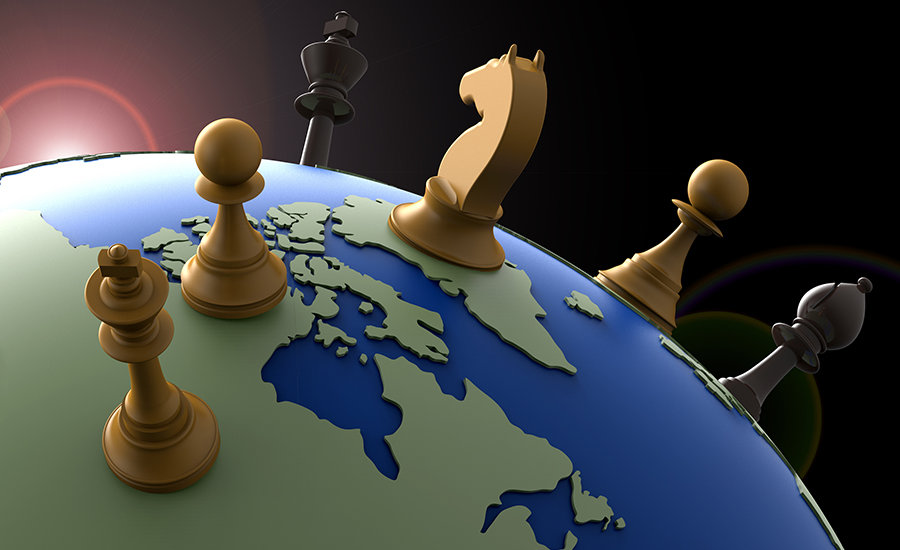 US foreign policy seems to be changing on a weekly basis. Making sense of how we deal with foreign allies and adversaries, these geopolitics speakers help audiences work through risk factors, think about domestic and international strategies, and explain differences between historical American policy and the new policies we’re seeing come out of Washington, DC now.

Here are seven of the most renowned and respected geopolitics and national security keynote speakers address the hottest international topics today.

Learn more about each of these terrific geopolitics and global trends keynote speakers by reading their mini bios below. To learn more, check out their individual speaker pages by clicking on the hyperlinks.

Former Commander of U.S. and International Forces in Afghanistan, Author of Best-Sellers "Team of Teams" and "My Share of the Task," and Co-Founder of the McChrystal Group

"To hear McChrystal talk about leadership is like hearing Steve Jobs talk about innovation or Henry Ford talk about productivity. The former general is a warrior and visionary who turned a bulky bureaucracy into a fast-moving force that helped wipe out Al-Qaeda in Iraq and is credited with turning the tide of that war as well as the one in Afghanistan." – WIRED Magazine

As the highest-ranking Asian American in the history of the U.S. Navy, Ambassador Harry B. Harris Jr. oversaw all military operations for more than half of the world’s geography as Commander, U.S. Pacific Command (USPACOM). Widely regarded for his leadership, Amb. Harris was selected to serve by two presidential administrations – first to lead in one of the military’s most challenging roles at a critical time when the U.S. confronted the rise of new world powers and nuclear threats, and later as U.S. Ambassador to the Republic of Korea.

Former Director of National Intelligence (DNI) & Author of the New Book, Facts and Fears: Hard Truths from a Life in Intelligence

Jim Clapper is formerly the nation’s top intelligence official and principal intelligence advisor to the President. He is revered for both his encyclopedic knowledge of critical intelligence issues and his straight-shooting style. Of Clapper, President Obama said: “[He] possesses a quality that I value in all my advisers: a willingness to tell leaders what we need to know even if it’s not what we want to hear.” Clapper’s new book is Facts and Fears: Hard Truths from a Life in Intelligence. It traces Clapper’s career through the growing threat of cyberattacks, his relationships with presidents and Congress, and the truth about Russia's role in the presidential election. Having overseen the U.S. intelligence community through a period that included the bin Laden raid and the Snowden leaks, Clapper’s uniquely positioned to discuss the broad scope of threats facing American interests.

President of the Brookings Institution, Former Commander of NATO and US Forces in Afghanistan, & Former Presidential Special Envoy to the Global Coalition to Counter ISIL

General John Allen is the former Head of NATO Forces in Afghanistan. Personally appointed by President Obama as the first American to the Global Coalition to Counter ISIL, he is a fresh and thoughtful thinker on what’s happening in the world. What Allen does so well is translate how security challenges will likely play out while captivating audiences with powerful stories from his time leading the military. Allen’s talk on geopolitical megatrends—coupled with his ability to assess hot spots, threats, and opportunities around the world with a country-by-country analysis—make him a great choice for high-level executives looking to learn more about emerging markets and probable business disruptions.

Evelyn Farkas is the former Deputy Assistant Secretary of Defense for Russia, Ukraine, and Eurasia, and a top choice for groups interested in global trends. The former advisor to three secretaries of Defense, who was considered the DOD's top Russia expert, Farkas expertly discusses the state of U.S. foreign affairs and the scope of security challenges America faces, how our changing relationships with allies and adversaries will affect the global order and businesses, and what companies and individuals should be thinking about now to stay ahead of global trends.

Cory Gardner is focused on empowering people to better lives through innovation and creativity in public policy, diplomacy and the economy. He is a fifth-generation Coloradan, and was born and raised in Yuma, a tiny town on the Eastern Plains of Colorado where his family owned a farm implement dealership for over 106 years. He lives in the same prairie house his great-grandparents lived in and that his grandfather called home. He believes in common sense solutions and making institutions throughout government and the economy more accountable to the people of this country.

Interested in learning more about one of these speakers, or need more ideas for other keynote speakers covering the hottest topics of the day? Call 1-800-SPEAKER or live chat with a member of our team right now.