What Makes a Great Adventure Speaker? 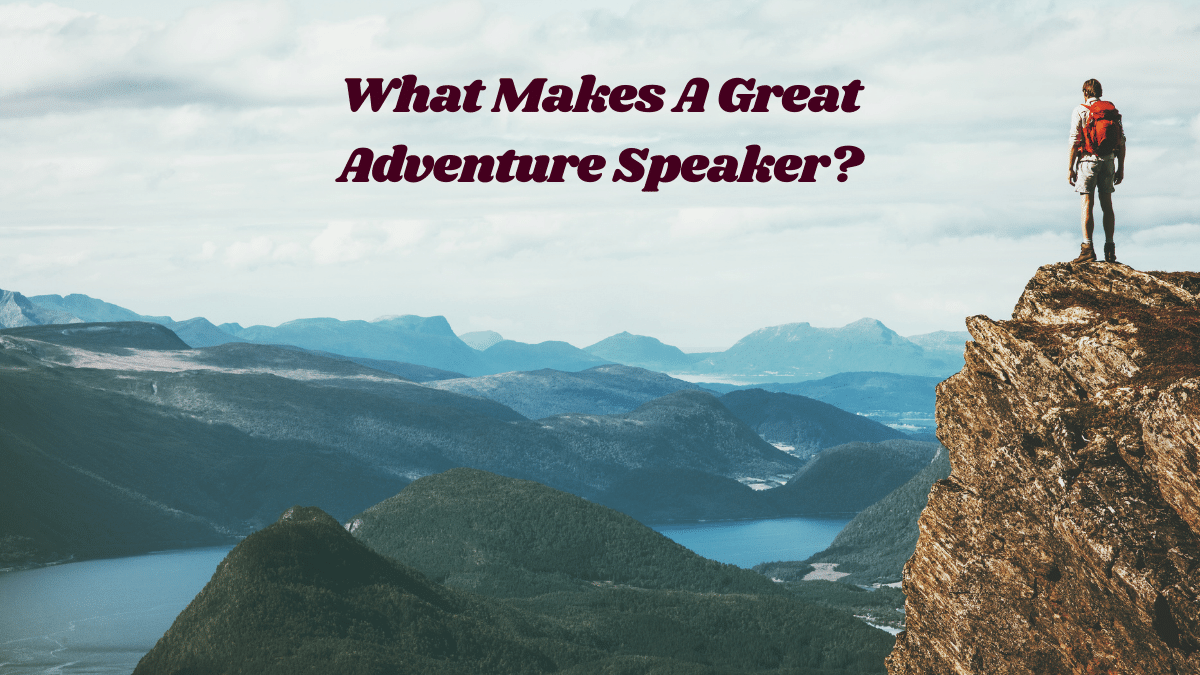 While many of us may not be able to participate in heart-pounding, sweat-inducing, euphoria-building adventures due to our current obligations – work, family, friends – hearing about other peoples’ adventures can be just as inspiring. But what exactly makes a great adventure speaker? And what are the benefits of hiring these types of speakers, besides a slight yearning for an adventure? Keep reading to find out.

What Makes a Great Adventure Speaker?

A great adventure speaker is someone who has taken on and completed a grueling feat. However, an adventure isn’t always necessarily the Indian Jones-esque experience that comes to mind. An adventure may be as simple as achieving something that may seem out of reach to the ordinary person. A great adventure speaker shows that these experiences aren’t as far out of a person’s reach as they may think. These speakers can even come in the form of athlete motivational speakers and people who are faced with adversity or challenging circumstances and prove that although some talent may be required, most things in life can be accomplished with relentless dedication, motivation, and grit.

The Benefits of Hiring an Adventure Speaker

The benefits of hiring an adventure speaker to speak at your in-person or virtual event are endless. Some of these benefits include:

Erik Weihenmayer is one of the most sought-after keynote speakers in the world. Despite losing his vision at age 14, he is an accomplished climber, paraglider, skier, and kayaker who never allows blindness interfere with his passion for pursuing an exhilarating and fulfilling life. Erik brings audiences a powerful message about harnessing the power of adversity as fuel for greatness, emphasizing the importance of building a strong “Rope Team,” and illuminating how to develop a “No Barriers Mindset.” Erik’s talks resonate with diverse audiences from graduating college students to large sales teams to CEOs of Fortune 500 companies. Erik’s speaking career has taken him around the globe from the 2005 APEC Summit in Chile to the 2009 Presidential Inaugural celebration in Washington, DC. Erik speaks to major companies in London, Dublin, Moscow, Berlin, Hong Kong, Beijing, and Abu Dhabi, as well as across the United States. Previously, he shared speaking platforms with luminaries such as Secretary Colin Powell, President Bill Clinton, and Prime Minister Tony Blair.

The challenges of leading and performing in isolation, something people all over the world over have been introduced to, are familiar terrain to Ben Saunders. Navigating and overcoming self-doubt, loneliness, uncertainty, and adversity in pursuit of a goal is what makes Saunders a record-breaking polar explorer, and an invaluable speaker in uncertain times.

An adventurer, record-setter, and boundary-breaker, Darcy Gaechter is best known as the first woman to kayak the Amazon River from source to sea. Her three-person team also became the first team to kayak the entire river, where all previous expeditions had either hiked around or rafted portions of the whitewater in the Amazon River’s headwaters. The journey required her crew to paddle over 4,000 miles across the widest part of South America, a voyage that took 148 days to complete. The successful traverse of the entire Amazonian watershed relied on Gaechter’s team’s ability to balance many factors: physical endurance, an ability to work with the locals to assuage their fears of outsiders, patience for interpersonal conflicts arising from three people spending every waking moment together for five months, and a mental toughness that allowed no room for quitting to be an option. Without a doubt, the Amazon was as much an intellectual and emotional undertaking as it was a physical challenge - and her journey demonstrates that anyone can "do the undoable" with belief in yourself and your goal.

Joby Ogwyn is world-renowned for his prowess as an adventurer, high-altitude mountain climber, BASE jumper, and wing-suit explorer. Known for his many firsts and unique feats, Joby summited Mount Kilimanjaro when he was just 18. When he first summited Everest in 1999, he was the youngest American to ever do so. A famed top-speed climber, in 2004 Ogwyn beat the ascent record of the Tibetan peak Cho Oyu, reaching the 27,000 foot summit in just eight hours. Four years later, he climbed Mt. Everest in nine and a half hours (it takes most people six days to complete the trip), setting the world record for the fastest ascent. For most climbers, reaching the summit of Everest is the ultimate dream, but for Ogwyn it was only the beginning. Joby has produced and starred in television shows and documentaries with National Geographic and Discovery, and has appeared in commercials for brands including Mastercard and Oakley. He has appeared many times on The Tonight Show with Jimmy Fallon, the Today Show, Morning Joe and more to discuss his incredible adventures.

Ever since he was a small child, Steve Baskis had wanted to serve in the military like his father and grandfather. He enlisted and was injured just eight months into his deployment. Now, his resultant blindness has instilled in him a drive to test his own potential and push the boundaries of what disabled people are perceived capable of doing. A testament to the human spirit, Baskis has become self-sufficient, fallen in love, gotten married, and summited three mountains – all after going blind.

Examining Kevin Gaskell’s track record surprises some people. As CEO of four successful world class brands, and as a serial entrepreneur who has built international companies from nothing more than ‘a good idea,’ Kevin has created over $5 billion in shareholder value and yet has still found time to break a world record in the fastest row across the Atlantic from Spain to Antigua, climb the world’s highest mountains, walk to both North and South Poles, compete in international sports, and play in a rock band. He speaks with electricity about using inspired leadership to achieve extraordinary results.

John Volanthen is a world record-holding British caver and cave diver who has been involved in cave exploration over the last two decades. John began caving with the scouts at the age of 14 and has been at the forefront of cave exploration since combining caving and diving. In 2018, John played a key role in the Tham Luang Thailand cave rescue and was named one of TIME magazine’s “Heroes of the Year.”

Dr. John Grotzinger is the chief scientist and head of strategic science planning for NASA’s $2.5 billon Curiosity rover mission to Mars, which riveted the country with its dare-devil landing and remains the most complex spacecraft to ever land and operate on the surface of another planet. A veteran geologist of more than 30 years of exploration of Earth and Mars, Grotzinger has led expeditions to the far corners of the globe and heads the most visible mission in the history of robotic space exploration in its search for evidence of past life. He received NASA’s prestigious Outstanding Public Leadership Medal for the unprecedented success of the mission, and Popular Mechanics named him No. 2 on its list of “10 Innovators who Changed the World.” Discover magazine also listed the Mars Curiosity rover giving researchers unprecedented access to the Red Planet as No. 1 in its list of the “Top 100 Science Stories of 2013.”

Bear Grylls has become well known around the world as one of the most recognised faces of survival and outdoor adventure. His journey to this acclaim started in the UK on the Isle of Wight, where his late father taught him to climb and sail. Trained from a young age in martial arts, Bear went on to spend three years as a soldier in the British Special Forces, serving with 21 SAS. It was here that he perfected many of the skills that his fans all over the world enjoy watching him pit against mother-nature.

Hire an Adventure Speaker For Your Next Event

Ready to inspire and motivate your audience with an adventure speaker? Keep audiences talking long after your event.

For more information about our expansive roster of elite keynote speakers or to book one of these talented speakers for your next event or meeting, contact our team today.

You can also email us, call 1-800-SPEAKER, or live chat with a member of our team right now.