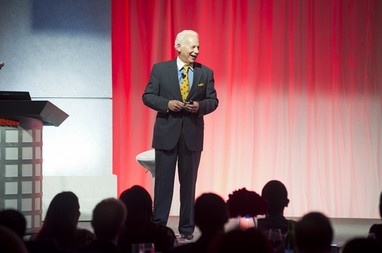 On Wednesday, May 13 Leading Authorities and TD Bank co-hosted an exclusive Salon Dinner featuring Ambassador Ken Adelman, the author of Reagan at Reykjavik: Forty-Eight Hours That Ended the Cold War.

The president’s then-director of the U.S. Arms Control and Disarmament Agency, Adelman was present for what became the definitive turning point in ending the Cold War. Through fascinating, never-before-heard stories, he explores what organization’s can learn from one of our nation’s most beloved president’s leadership style, optimism, and view of failure (the 1986 summit at first appeared to end in failure but ultimately paved the way for historic nuclear accords and the destruction of the Berlin Wall).

During the dinner, Adelman shared leadership lessons on negotiations, strategy, courage, and perseverance. Guests were able to participate in a live discussion to ask their most pressing questions.

If you are interested in learning more about our Salon Dinner events please contact Christine Norton at christine@lauthorities.com.