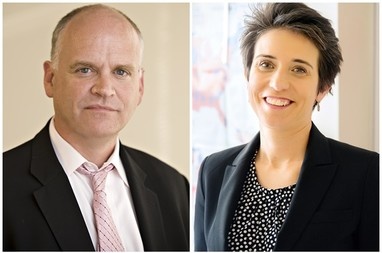 Ron Fournier is the award-winning and nationally-acclaimed senior political columnist and editorial director of National Journal. Prior to joining NJ, he was the Washington bureau chief and a 20-year veteran of the Associated Press. There, POLITICO described him as “a consistent news-breaker while maintaining the classic low-profile style of a wire reporter.” As a columnist today, The Week calls him “the most well-read political writer in America” and said, “This veteran writer has become Washington’s most trenchant, most compulsively readable political critic. Liberal or conservative, libertarian or other, you’d be wise to start reading him.”

Amy Walter has built a reputation as an accurate, objective, and insightful political analyst with unparalleled access to campaign insiders and decision-makers. Known as one of the best political journalists covering Washington, she is the national editor of the Cook Political Report and the former political director of ABC News. From 1997–2007, Walter had previously served as senior editor of the Cook Political Report. She is also an exclusive panelist on NBC’s Meet the Press and a regular panelist on PBS’ Washington Week with Gwen Ifill and Fox News’ Special Report with Bret Baier. She provides political analysis every Monday evening for the PBS NewsHour.

If you would like to learn more about attending future events, please contact Haley Rauch at haley@lauthorities.com