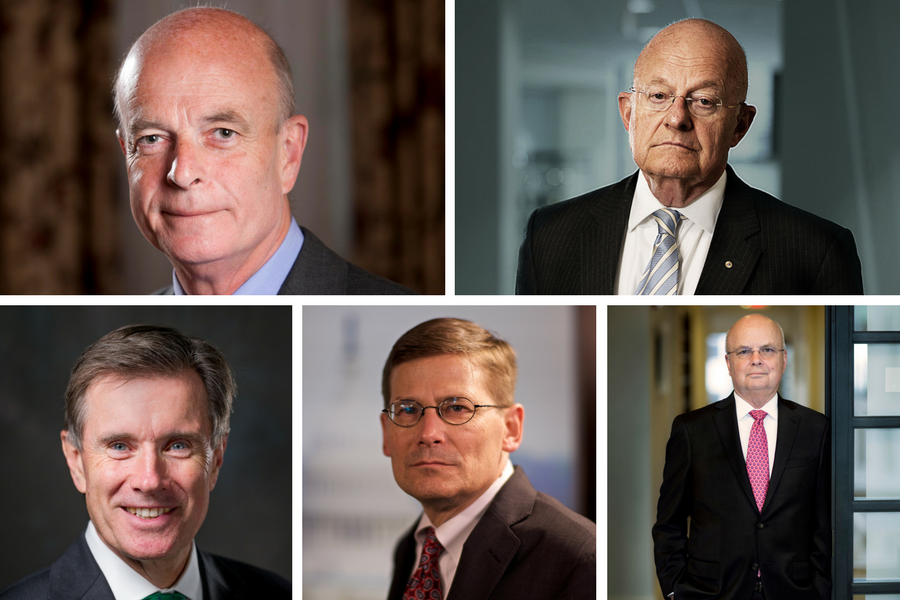 These big-name speakers cover geopolitics and cyber crime and defense, especially as it relates to the growth of the internet of things and emerging technologies:

Sir John Scarlett was chief of the British Secret Intelligence Service from 2004-2009. He spent nearly four decades as an intelligence official based around the world (Paris, Nairobi, London, Moscow) and was responsible for the co-ordination and presentation of intelligence advice to the Prime Minister. He offers the ultimate insider’s glimpse into the major trends affecting businesses now.

Director James Clapper is the former Director of National Intelligence for the US. In this role, he oversaw all 17 American intelligence agencies (including the FBI, CIA, and NSA) and served as the President’s principal intelligence advisor for 7 years. With over 50 years of experience, Director Clapper raises the bar at events by sharing incredible stories and an unparalleled overview of current threats and responses.

Sir John Sawers is the former chief of the British Secret Intelligence Service from 2009-2014. Known for bringing unprecedented openness to the role, he’s been praised for delivering sound bites that sum up issues with brevity and fascinating detail. As “cyber attacks are not much impressed by international borders,” he discusses a need for an international approach to cyber security and shares insights on privacy versus security concerns.

Gen. Mike Hayden is a top choice for groups that want a high-level look at the geopolitical relationships fueling cyber warfare as well as the specific ways information becomes compromised. The only man to serve as director of both the CIA and the NSA, he offers the ultimate insider’s look at a nation’s ever-changing informational landscape and cyber-security vulnerabilities.

Michael Morell is the former Deputy and Acting Director of the CIA. In an age where the intelligence community has never been more important to national security, he offers audiences a debrief on the current state of our intelligence capabilities as well as how cyber fits into relationships with Russia, China, Iran, and North Korea and the role of cyber operations in war.

For more information about these speakers, their availability, or their rates, please fill out the form below.