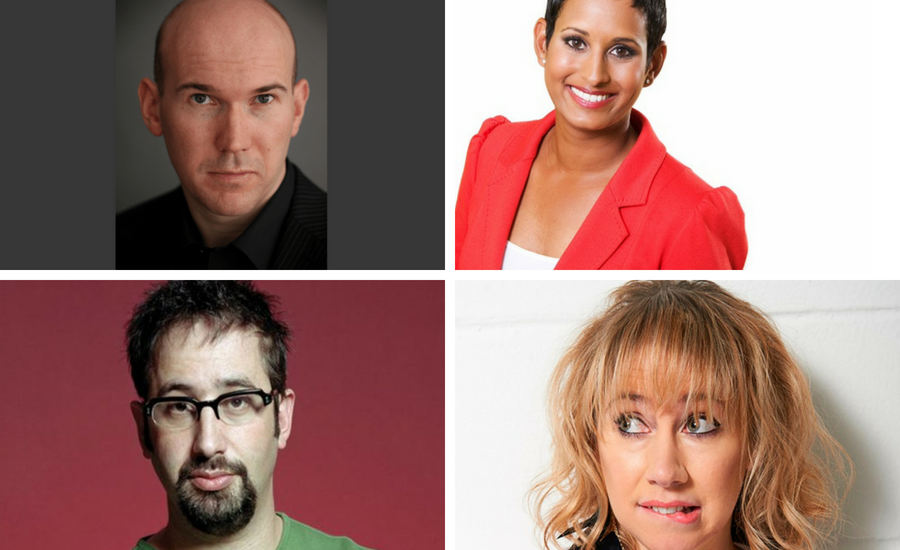 Are you looking to book a host, moderator, or entertainer for an autumn awards show ceremony? We represent presenters and personalities who take dinner events and ceremonies to the next level.

Whether you’re looking for someone who can lighten the mood, capture your audience’s attention, discuss current events and the news of the day, or all of the above, we represent speakers who can help you put together a seamless and enjoyable evening for your guests.

Here are four fantastic options for awards show and after dinner keynote speakers for events and meetings:

Here is more information about these four hosts for you to consider for your autumn event or meeting:

Alex Macqueen, Actor, moderator, and after-dinner speaker
Best known for his roles as Julius Nicholson in BBC's Thick of It and Neil's Dad in the Channel 4 comedy, The Inbetweeners, Alex Macqueen is not only an actor, but an advocate of entertainment. With a strong background in theater, he has appeared on television, film, and radio in the UK. Alex is currently an Ambassador for Macmillan Cancer and the British Heart Foundation, and hosted the 'Downing Street Debates' for the charity, Debate Mate.

Naga Munchetty, BBC Breakfast and European Morning News television presenter
As one of the main presenters from BBC's well-known programme Breakfast, Naga Munchetty is a powerhouse from South London whose goal is to empower and inspire women to achieve success. Naga also has a love for charity, as she was an honorary celebrity member of The Duke's 100, which is part of the charity The Duke of Edinburgh's award. She also ran the London Marathon in 2013 for United Response, a mental health charity.

David Baddiel, Comedian, novelist, and television presenter
Currently on tour for his first stand-up show in 15 years, Fame: Not The Musical, David Baddiel is one of the country's most successful post-alternative comedians known for some of the most memorable comedy achievements of the last twenty years. David is also a novelist, who wrote the novel The Death of Eli Gold in 2012, along with three critically acclaimed titles prior: Time For Bed, Whatever Love Means, and The Secret Purposes.

Tiff Stevenson, Stand-up comedian, actor, and writer
Described by The Sunday Times as 'funny, intelligent & defiant, Tiff Stevenson is an incredible host and comedian with a familiar face on television. She has appeared on shows such as The Office, Absolute Power, and Balls of Steel. She has also appeared as a panelist on Mock the Week, Never Mind The Buzzcocks and The Apprentice: You're Fired!

Ready to book Alex Macqueen, Naga Munchetty, David Baddiel, or Tiff Stevenson for your next event or meeting? Reach out to our team today.