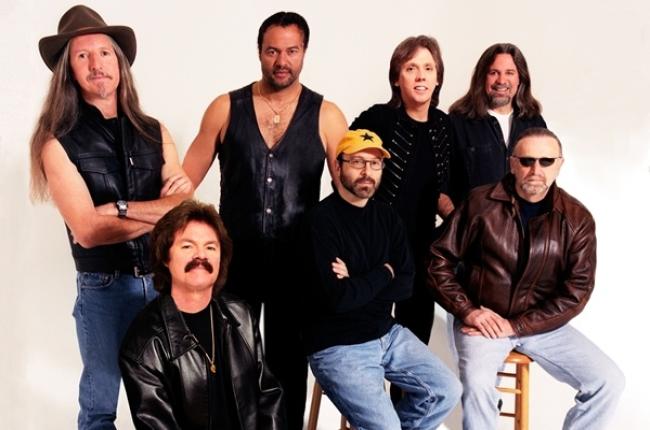 The Doobie Brothers are one of the very few American rock and roll groups that have been able to achieve and sustain a phenomenal level of success. It is a success that has sold more than 50 million records. This includes: 2 Grammy's; 27 chart singles; 16 top 40 hits (including 2 number 1's); 11 multi-platinum albums; 13 Gold albums and that most rare of distinctions, The Diamond Award, for the sale of 10 million units of a single title "Best Of The Doobies Vol. 1". Combined with their consistent appeal on the road, The Doobies have earned a fanatical loyalty for their high-energy shows and are truly one of America's most loved rock and roll bands. The secret to their success is most certainly in their diversity.

Playing in a trio in early 1970, Tom Johnston met veteran Bay area musician Patrick Simmons. Simmons's musical leanings were complimentary with -yet somewhat different than - those of Johnston. Simmons was the lead singer and guitarist of another band at the time. However, a week after they met he was asked to join up with Johnston's band. Eventually Simmons agreed and by the fall of 1970, The Doobie Brothers were born. The band was soon signed to Warner Brothers Records.

Upon release of their second album, "Toulouse Street", in 1972 and the hit single "Listen to the Music", the legend began. By this time, drummer, Mike Hossack, had joined the band to make it a quintet and the signature double drummer sound debuted. This album also produced the hits, "Jesus is Just Alright" and "Rockin Down the Highway."

"The Captain And Me" was released in 1973 and produced the classics: "China Grove" and "Long Train Running" (The Doobies highest charting hit). The Doobies 3rd multi-platinum album, "What Were Once Vices Are Now Habits", featuring "Black Water" and "You Just Can't Stop It", followed that album.

In 1975 the band released "Stampede" and from that album came "Music Man", "Take Me In Your Arms" (Rock Me) and "I Cheat The Hangman." The following year Michael McDonald joined the band for the album "Takin It To The Streets", which produced 4 singles, including the number one "Takin it to the Streets" and "It Keeps You Running." Throughout the decade The Doobie Brothers continued to release hit albums and singles.

In 1982 the band embarked on a final tour and at the conclusion of the tour the musicians went their separate ways. However, they did remain in close contact and preformed once a year at a benefit concert for The Children's Hospital at Stanford University. In 1987 on an 11-city tour they raised more than 1 million dollars for a variety of charitable causes. The tour concluded with a performance on July 4th, 1987 at a peace concert in Moscow. This tour reignited interest in The Doobie Brothers for both audiences and the band members. The Doobies then returned to the recording studio for Capitol Records. The resulting album, "Cycles" included the top 10 hit "The Doctor" and went Gold. Since that time The Doobies have toured and in 1998 signed with WEA distribution, Pyramid Records. In 1999 the band was awarded the RIAA Diamond Award of the sale of 10 million copies of "The Best of the Doobie Brothers Vol. 1."

The group spent the next two years working on the 2000 release "Sibling Rivalry". Time was not an issue and the band was determined to make a milestone record that was a real musical statement. They succeeded in creating a true musical evolution in a group effort that highlighted all of the multi-faceted talents the band possessed. The essentially self-produced album was unlike anything the Doobies had released before. It is a testament to the incredible diversity that has come to be known as "Doobie Brothers Music".

After 30 years The Doobies made music history by releasing their last studio album on the Internet through imix.com and 60 days later in stores everywhere through Pyramid's WEA distribution. As part of that historical release, on June 9th, 10th and 11th, 2000, The Doobie Brothers recorded their greatest hits live. Those live tracks accompanied the Internet release of the studio album and were exclusive to the Internet.

Keeping with the Doobie tradition of touring and supporting album releases, 2001 through 2003 found the band performing all over the world. This included a US amphitheater tour in the summer of 2003 with long-time associates Huey Lewis and the News and a special performance to celebrate the 100th birthday of Harley Davidson.

2004 finds the band comfortably on the road again. In what promises to be another notch on their career belt, the Doobie Brothers will headline a special acoustic performance in April at the Meyerson Symphony Hall in Dallas as a fund-raiser for the Dallas Symphony.

Over the years their music has evolved from a country blues base into a sound emphasizing both R&B and Jazz elements, from guitar fueled rockers like "China Grove" and "Long Train Running", to the folky chart topper "Black Water", the Doobies have defied any single label. Forever in pace with the American Spirit, The Doobie Brothers will continue to rock well into the future.