Loyalty Expert and Creator of the Net Promoter Score

Fred Reichheld is a Bain Fellow and founder of Bain & Company’s loyalty practice, which helps companies achieve results through customer and employee loyalty. He is the creator of the Net Promoter system of management.

Fred’s work in the area of customer and employee retention has quantified the link between loyalty and profits. Fred’s books, The Loyalty Effect: The Hidden Force Behind Growth, Profits, and Lasting Value (HBSP 1996); Loyalty Rules! How Today’s Leaders Build Lasting Relationships (HBSP 2001), and The Ultimate Question: Driving Good Profits and True Growth (HBSP, 2006) have each become best-sellers.

Fred is a frequent speaker at major business forums and his work on loyalty has been widely covered in The Wall Street Journal, New York Times, Financial Times, Fortune, Business Week,and The Economist.  He is the author of eight Harvard Business Review articles on the subject of loyalty.

Consulting Magazine chose Fred as one of the “25 Most Influential Consultants” in its 2003 annual survey. According to The New York Times, “[He] put loyalty economics on the map.” The Economist refers to him as the “high priest” of loyalty 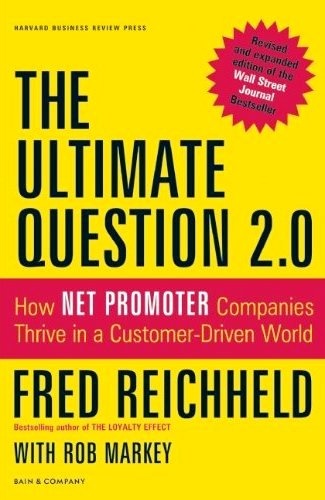 The Ultimate Question 2.0: How Net Promoter Companies Thrive in a Customer-Driven World

The Loyalty Effect: The Hidden Force Behind Growth, Profits, and Lasting Value