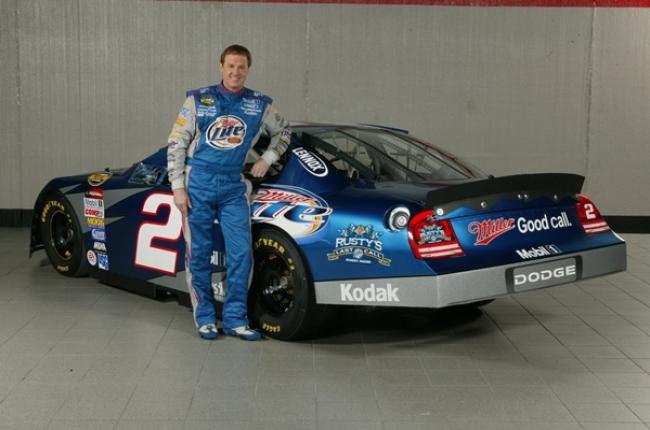 Rusty Wallace is one of the greatest NASCAR drivers in history.  Having won 55 NASCAR Winston (Nextel) Cup races and with 36 Career Winston Cup Pole Positions, he is ranked the eighth all-time best NASCAR driver.  He also ranks as one of the top five money winners in NASCAR history with over $43 million in career earnings.

In addition to being a driver, Rusty Wallace has entered the team ownership arena as well.  His first full-time campaign in the NASCAR Busch Series with driver Kenny Wallace in the early 1990's was highly successful, and in 2005, he entered the Series with drivers Jamie McMurray and Jeremy Mayfield.  Wallace also has joint ownership of Penske Racing South, the highly successful NASCAR NEXTEL Cup Series team for which he drives.

In the 2004 season, Rusty Wallace finished 16th in the 2004 NASCAR NEXTEL Cup, and he started his 650th career race and his 650th consecutive race.

Rusty Wallace has had an exciting career from the start.  He was first named USAC Rookie of the Year in 1979, after winning 200 races between 1974 and 1978.  In 1984 he was again named Rookie of this year, this time by Winston Cup.  In 1988 he was voted the NMPA Driver of the Year, an award that he received again in 1993 along with being voted one of NASCAR's 50 Greatest Drivers.  In 1989, Wallace won both the NASCAR Winston Cup Championship and the Winston All-Star Race.

Rusty is married with three kids and currently resides in Cornelius, North Carolina.  He is a highly accomplished pilot with over 10,000 flight hours and is an avid golfer.