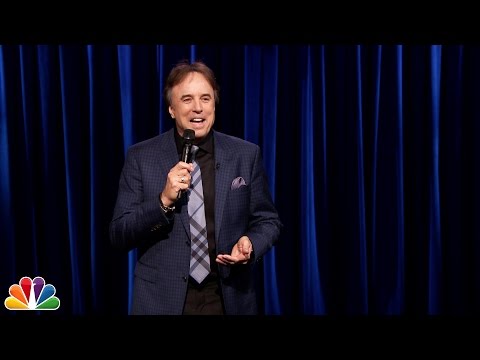 In this video, popular comedian and actor Kevin Nealon, performs jokes about buying an electric car, but putting in a gas engine, and trying new foods. This performance took place on the light night show, Jimmy Fallon.

Kevin Nealon sets himself apart from other comedic performers with his unique sense of humor, dry wit and likeable demeanor. Nealon is best known for his nine-year stint as a cast member of NBC’s Saturday Night Live, and has received critical acclaim for his role in the Showtime series, Weeds. Weeds, which recently completed its eighth and final season, has been honored at the 2006, 2007 and 2009 Golden Globes with nominations for “Best Television Series Comedy or Musical.” In 2007 and 2009, Weeds was nominated for the Screen Actors Guild Award for “Outstanding Performance by an Ensemble in a Comedy Series.”

Nealon’s second standup special for Showtime. “Whelmed…But Not Overly,” debuted in August, 2012. On the big screen, Kevin recently starred in Just Go with It, in which, he portrays one half of a plasticsurgery-obsessed couple. Nealon was also in the comedy Bucky Larson: Born to be a Star and in 2010, Nealon completed work on the film and They’re Off.

A unique sense of humor and profound dry wit separates Kevin Nealon from other performers. A likable comedian, he got his start as a department store Santa Claus. Now the longest-running cast member of Saturday Night Live, Nealon's familiar face appears in movies such as Happy Gilmore and The Wedding Singer.