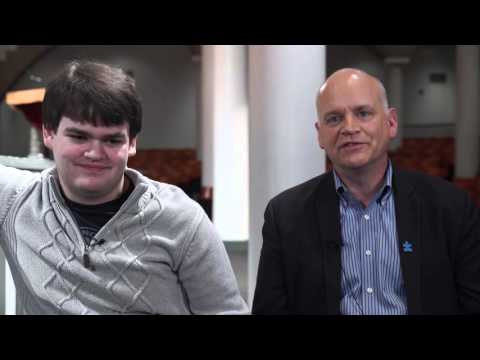 In this video, Autism Speak's talked to The Atlantic's political columnist, Ron Fournier, and his son Tyler about autism, their relationship, and their father-son journey that inspired Ron to write his upcoming memoir, Love That Boy. Love That Boy is a uniquely personal story about the causes and costs of outsized parental expectations. What we want for our children—popularity, normalcy, achievement, genius—and what they truly need—grit, empathy, character—are explored by Ron Fournier, who weaves his extraordinary journey to acceptance around the latest research on childhood development and stories of other loving-but-struggling parents.

Ron Fournier is an award-winning and nationally-acclaimed political contributor to National Journal and The Atlantic. He formerly served as editor and publisher of Crain’s Detroit Business and as senior political columnist and editorial director of National Journal. Prior to joining Atlantic Media, he was the Washington bureau chief and a 20-year veteran of the Associated Press. There, POLITICO described him as “a consistent news-breaker while maintaining the classic low-profile style of a wire reporter.” Similarly, The Week called him “the most well-read political writer in America,” saying: “This veteran writer has become Washington’s most trenchant, most compulsively readable political critic. Liberal or conservative … you’d be wise to start reading him.” He is currently the President of the public relations and lobbying firm Truscott Rossman.

Ron Fournier is an award-winning and nationally-acclaimed political columnist formerly of National Journal and The Atlantic. He is a 20-year veteran of the Associated Press who served as their Washington bureau chief. Called “a consistent news-breaker” and “one of the savviest political journalists of his generation,” he is also the author of the best-selling book Applebee's America: How Successful Political, Business, and Religious Leaders Connect with the New American Community. A familiar voice around the Beltway and widely respected by his peers, he is known for his hard-hitting reporting on Congress, the White House, and actions of both major parties. He is currently President at Truscott Rossman.