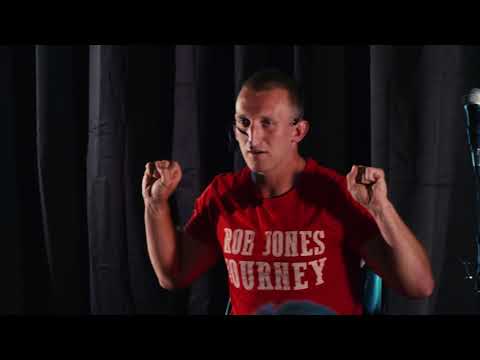 Rob Jones, a retired Marine Corps combat engineer, Para-Olympian Bronze medal champion, recalls the fateful events that caused him to lose both his legs above the knee. Primarily tasked with finding improvised explosive devices in Afghanistan, Rob’s luck finally ran out on July 22, 2010, when an IED found him first. Rob will discuss the principle he followed that not only allowed him to make a full recovery, but enabled him to become stronger than he ever thought possible by "using the weight". Rob grew up on a farm in the small town of Lovettsville, Virginia. I graduated from Loudoun Valley High School in 2003, and from Virginia Tech in 2007. In my junior year at Virginia Tech, I joined the Marine Corps Reserve as a combat engineer at Bravo Company, 4th Combat Engineer Battalion in Roanoke, VA. In the Marine Corps, combat engineers are responsible for a multitude of disciplines but the primary role that I and my fellow combat engineers undertook was the use of explosives, and the detection of buried IEDs and Deployed to Habbaniyah, Iraq in 2008, and again to Delaram/Sangin, Afghanistan in 2010. During his deployment to Afghanistan while operating as a part of a push into Taliban territory, I was tasked with clearing an area with a high likelihood of containing an IED. It was in this capacity that I was wounded in action by a land mine. The injury resulted in a left knee dis-articulation and a right above knee amputation of my legs. Taken to National Naval Medical Center in Bethesda, MD for the initial phases of my recovery, which consisted primarily of healing and closing my wounds. I was then transferred to Walter Reed Army Medical Center for the remainder of my rehabilitation. At Walter Reed I was fitted with prosthetics, and worked very hard to learn how to walk with two bionic knees. I also used the time to relearn how to do other things with my new challenge including riding a bicycle, running, and rowing. I took naturally to rowing, and since I am always in search of a challenge that I can use to become better, I decided to train for the 2012 Paralympics. After being honorably discharged from the Marine Corps in December, 2011, I immediately moved to Florida to train with my rowing partner, Oksana. We spent five months there, and during that time period won the trunk and arms mixed double sculls trial race held by USRowing to become the USRowing national team for our boat class, and also won the Final Paralympic Qualification Regatta in Belgrade to qualify for the Paralympics. We then moved to Charlottesville, Virginia to continue training until the Paralympics in September, 2012. Our hard work paid off for us as we brought home a bronze medal in our event. I continued in the sport of rowing through the 2013 season, where my partner and I placed 4th in the 2013 World Rowing Championships. On October 14, 2013 I began a solo supported bike ride across America which started in Bar Harbor, Maine, and ended in Camp Pendleton, California. The ride was 5,180 miles long and completed on April 13, 2014, a total of 181 days after it began. Over the course of the ride, along with my team, I raised $126,000 for the Coalition to Salute America's Heroes, the Injured Marine Semper Fi Fund, and Ride 2 Recovery, three charities which aid wounded veterans. Between Fall 2014, and Summer 2016, Rob trained in the sport of triathlon with the intention to compete in the 2016 Paralympic Games. I saw considerable personal improvement, but was unable to qualify. Just completed a month long back to back marathon challenge in which I will run 31 marathons in 31 days in 31 different major cities, as he championed the Warrior charities that helped him. This talk was given at a TEDx event using the TED conference format but independently organized by a local community. Learn more at
Share
https://www.leadingauthorities.com/speakers/video/rob-jones-use-weight-tedx-talk

Retired Marine Sergeant and Paralympic Bronze Medalist, Rob Jones’ life is synonymous with fearless perseverance. In 2010, he was struck and injured by a land mine, resulting in a double above-the-knee leg amputation. Despite the injury, Rob’s incredible spirit remained intact. He went on to win bronze in the 2012 Paralympics, place fourth in the 2013 World Rowing Championships, and bike across the country for charity in 2015. In the fall of 2017, Rob completed a month long, back-to-back marathon challenge, running 31 marathons in 31 days in 31 different major cities. The incredible undertaking raised awareness and funds for wounded veteran charities.
Topics & Types
Peak Performance Inspiration & Motivation Overcoming Adversity Teamwork Athletes & Commentators Military Leaders
Check Fees & Availability View Profile