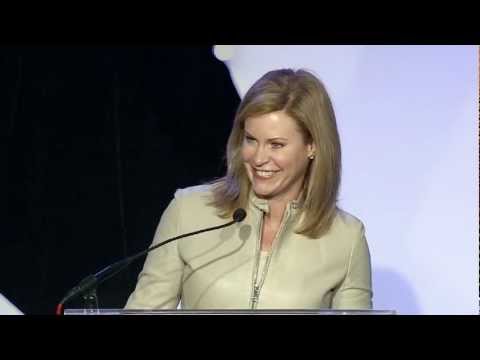 In this video, 2012 Obama Campaign Deputy Director, Stephanie Cutter delivers a keynote speech to NARAL Pro-Choice America's 40th Anniversary Roe v. Wade dinner in February of 2013. She talks about the power of grassroots organizing and the power of individual voices adding up to collective action.

A trusted advisor to America’s most powerful democratic leaders, Stephanie Cutter has been at the center of every major policy and political debate for the last 20 years. Continuing to reinvent today’s political communications as the first-ever virtual Democratic National Convention’s Chief Program Executive and Executive Producer of President Biden’s Inauguration, she is the former Deputy Campaign Manager for Obama 2012 and one of his chief strategists in the White House. Called “one of the most prominent voices in the [Democratic] party, and one of its top strategists and crisis managers” by Politico—and named one of the “50 Most Powerful People in Washington” by GQ—Stephanie has crafted high-level communications, reputation and crisis-management strategies for two U.S. Presidents, U.S. Senate leaders, and the nation’s highest profile political campaigns and Fortune 500 corporations. The New York Times called her “the polished, sometimes scarily organized strategist who gets things done” and noted her “long and favorable reputation with some of the most influential journalists and opinion makers in Washington.” Exclusively represented by Leading Authorities speakers bureau, Stephanie is revered for her gritty perseverance and straightforward approach to analyzing the difficult issues and political headlines of the day. In speeches, she offers an enlightening and “behind-the-curtain” look at the current state of politics.

Stephanie Cutter is one of the most-trusted voices of the Democratic Party. At the center of every major policy and political debate of the last 20 years, she offers an enlightening look at the current state of politics told through insider stories with today’s top lawmakers. From the halls of Congress to the campaign trail and from the West Wing to the C-Suite, Stephanie is one of the foremost experts at weaving together political strategies to create a narrative that resonates with voters. She was named one of the “50 Most Powerful People in Washington,” by GC magazine.
Topics & Types
Politics Healthcare Policy Healthcare Female Speakers Media Moderator Political Analysts
Check Fees & Availability View Profile