Why Is Big Data Being Talked About So Much? | LAI 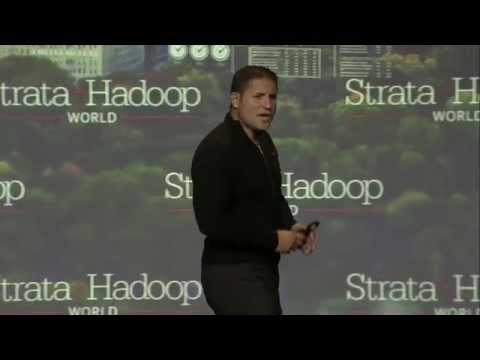 From the 2014 Strata Conference + Hadoop World in New York City, Paul Zikopoulos's keynote "A Word Too Much Repeated Falls Out of Being - So Why is Big Data Being Talked About so Much?" “A word too much repeated falls out of being” once wrote the poet A.R. Ammons. Well, credit to the term “Big Data” because it’s hanging in there – but surely too much repeated. Learn how this overused term is a confluence of technologies – some that have been around for a while, some that are relatively new, while others are coming down the pipe or not even invented yet. In this session you’ll see an actual application that builds on in-place existing technologies such as Hadoop to deliver understandable results. You’ll hear about a story where analytics at rest was applied to forms of unstructured data using a simple SQL-like development environment, and findings were promoted to the frontier of the business to score, in real time, monetizable intent, assess reputations, predict health outbreaks, and more. You’ll hear why Cognitive is the game changer and learn about attribute extraction for 360 degree master data around an entity. As a added bonus, the speaker is going to try to deliver this session without once mentioning ‘that word’. This keynote is sponsored by IBM. About Paul Zikopoulos: Competitive Database and Big Data teams. Paul is an award winning writer and speaker with more than 20 years of experience in Information Management and is seen as a global expert in Big Data and Analytic technologies. Independent groups often recognize Paul as a thought leader with nominations to SAP’s “Top 50 Big Data Twitter Influencers”, Big Data Republic’s “Most Influential”, Onalytica’s “Top 100”, and AnalyticsWeek “Thought Leader in Big Data and Analytics” lists. Technopedia listed him a “Big Data Expert to Follow” and he was consulted on the topic of Big Data by the popular TV show “60 Minutes”. Paul has written more than 350 magazine articles and 18 books, some of which include “Hadoop for Dummies”, “Harness the Power of Big Data”, “Understanding Big Data: Analytics for Enterprise Class Hadoop and Streaming Data”, “New Dynamic In-Memory Analytics for the Era of Big Data: DB2 10.5”, “DB2 pureScale: Risk Free Agile Scaling”, “DB2 Certification for Dummies”, “DB2 for Dummies”, and more. In his spare time, he enjoys all sorts of sporting activities, including running with his dog Chachi, swimming, and overall fitness training (he no longer worries about avoiding punches in his MMA training as an eventual understanding that he became too slow for full contact forced him into retirement). Ultimately, Paul is trying to figure out the world according to Chloë—his daughter. Watch more from Strata + Hadoop World 2014: Find out more about the conference: Don't miss an upload! Subscribe! Stay Connected to O'Reilly Media by Email - Follow O'Reilly Media:
Share
https://www.leadingauthorities.com/speakers/video/why-big-data-being-talked-about-so-much-lai

VP of Big Data at IBM and Future Trends Expert

Paul Zikopoulos is changing the way audiences are looking at their businesses in terms of sales, obstacles, and potential for growth - and the key ingredient is data! He’s been named an expert on big data by publications such as Big Data Republic, Technopedia, and Analytics Week. He is also included on multiple "experts to follow" lists around the world - including SAP’s “50 Big Data Twitter Influencers”. Paul has been consulted on this topic by “60 Minutes” and advises various universities as they develop their curriculums to match market needs. Paul has won multiple awards for his speaking in part because he has a unique ability to take the often complex world of analytics, big data, AI, data science, machine learning, etc. and reach audiences of all ages and skills levels with the right message. Paul is a Fortune 35 (IBM) Vice President focused on Analytics, an award winning writer (who has published more than 19 books and over 350 articles on various topics) and sits on the advisory board of Women 2.0 - a for profit company committed to close the gender gaps in founding, investing, and workplace leadership.
Topics & Types
Virtual Content Innovation Technology AI, Machine Learning, & Big Data Disruption Fintech Future Trends Business Leaders From Major Brands
Check Fees & Availability View Profile