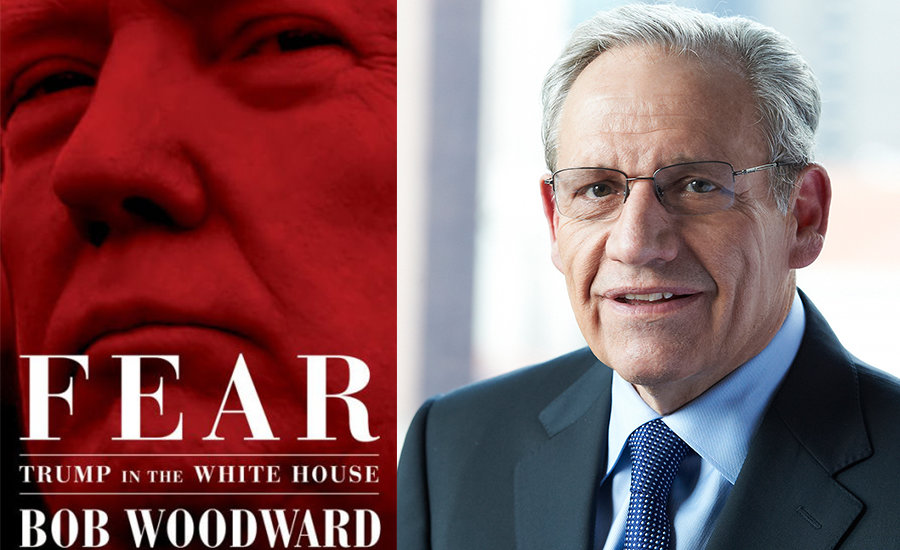 It was just announced that Bob Woodward, the two-time Pulitzer Prize-winning journalist and legendary political reporter who broke the Watergate Scandal, will be releasing a new book, called FEAR: Trump in the White House, detailing the "harrowing life" inside Donald Trump's White House. The highly-anticipated book will be published on September 11th, 2018, right before the November midterm elections.

Called “the most acute and penetrating portrait ever done of a sitting president,” the forthcoming book will be Woodward’s 19th book to date. Amazingly, Twelve of his books have reached #1 on the best-sellers list. His past books include the iconic All the President's Men, which was made into the Academy Award-winning motion picture of the same name, as well as more recent works like 2012's The Price of Politics and 2008's The War Within: A Secret White House History.

World-famous for first breaking the Watergate Scandal, Woodward is a two-time winner of the prestigious Pulitzer Prize and the associate editor of The Washington Post. He is widely regarded as one of the most impressive political journalists of the day.

The new book draw's on the hallmark approach that made Woodward a household name. He spent 19 months quietly researching and reporting on life inside the White House, slowly sketching a real-time masterpiece on this American presidency's style. In doing so, he has brought to light the unique approach this Administration is taking to decision-making in the Oval Office, the Situation Room, Air Force One, and the White House.

According to a new report from The Washington Post, Woodward interviewed firsthand sources in Washington, DC, for hundreds of hours, and sifted through documents and meeting notes to reveal in unprecedented detail, “precisely how [President Trump] makes decisions on major foreign and domestic policies.”

Steadfast in his never-ending mission to “uncover the best possible version of the truth,” Woodward is an influential yet impartial political journalist and speaker who brings both name-draw buzz and relevant political insight to events nationwide. Eager to pull back the curtain on Washington and its leaders, but careful to never promote a personal agenda, Woodward's reputation and clout is unsurpassed. He helps audiences get beyond the social-media driven, 24-hour news cycle to understand the true issues at hand and the way our country is being shaped by leaders in Washington, DC.

If you have a political event or meeting coming up this fall or next spring, we highly encourage you to take a good look at Bob Woodward. You can visit Bob Woodward's speaker profile to learn more about his experience working in the media and politics over the course of the last eight US Presidencies, read more about his accomplishments and accolades, and find out more about his speaking topics and expertise.

To check his availability and fees for an upcoming speaking engagement or to book Bob Woodward to speak at your next event or meeting, reach out to our team.

You can also fill out the form below, send us an email, call 1-800-SPEAKER, or live chat with a member of our team right now if you have questions or are ready to start working with one of our experienced program consultants on your keynote event today.