Podcast: Kal Kallaugher On Why Cartoons Speak Louder Than Words 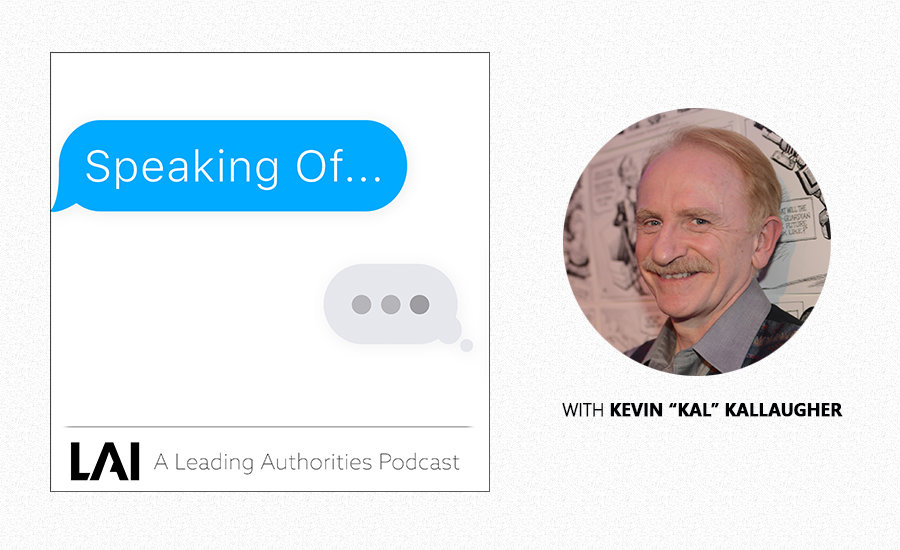 Kevin "Kal" Kallaugher always knew he wanted to be a cartoonist, but wasn't entirely sure how he was going to turn his love of caricatures into a career. Today, his portfolio includes more than 4,000 cartoons, creating a visual history of American politics and culture over the past 30 years.

We talked with Kal about how he broke into the business, how the ideas for his cartoons are born, the role of the media in politics, and the political climate today. Listen to this engaging episode of the Speaking Of podcast episode as he discusses how be became The Economist's first editorial cartoonist in 145 years, how he views his responsibility to the magazine's audience, and why cartoons speak louder than words:

Here is the full transcription of this podcast episode:

Kevin Kallaugher: I want each of you to think about your face for a moment. Okay. It's your most prized possession. Am I right? It's like one of the keys to your identity. Now, imagine a wicked caricaturist. Focus their aim on your features and not just the good ones. They take those features, they pull them apart and then they re-assemble it under their whim. Then that unflattering portrait is then put into a newspaper for millions of people to read and so they can ogle and giggle at your expense. It doesn't feel very good, does it? Now that's what it feels like to be a politician being lampooned by a six-year-old like me. Okay. But now the thing about caricatures, it's not always about humiliation and distortion. In fact, my favorite quotation about caricature comes from an Italian Renaissance painter named Annibale Caracci, and he said, "A good caricature is more true to life than reality itself."

Leading Authorities: That's Kevin Kallaugher, he's a renowned political cartoonist, although he prefers to go just by call Kal. Kal's career, began more than 30 years ago when he scored a job at The Economist. Since then he's published 8,000 plus cartoons in more than 100 publications worldwide. If you've ever found yourself smirking at a cartoon, there's a decent chance Kal drew it. Today, I talk with him about how he got into the field, where his out of the box ideas come from and what it's like being a satirist in today's political climate. You're listening to, Speaking Of, the Leading Authorities, Inc. podcast where we sit down with innovators and thought leaders to talk about ideas that are changing the world now. I'm your host Maddie Glading.

Okay, so you are The Economist's resident cartoonist, the first in the 145-year history of the publication. I'm wondering if in your own words, you could tell me what the purpose of an editorial cartoonist is and what whole you sort of fill that a reporter misses, that a reporter doesn't serve.

Kal: Well, the editorial cartoonist is this unique animal within the world of journalism, because we dance between being a journalist, of course, covering the news watching, what's happening and trying to make sense of it. We're also like a columnist, where we're doing a commentary on the news. We are also satirists, where we're employing humor to get our point across, and then we're also artists. And so, the curious thing for cartoonists is that we straddle all these different sides of journalism and when it's most peculiar, when you're in a newspaper, it's always interesting where certain newspapers place the cartoonist. Do they put them in the graphic department? Do they put them in the editorial department? Sometimes they have their own little space because they are this kind of unique beast. Within that complex realm that we operate in. Each cartoonist also takes that cartoon job and puts it in a different direction. So, some cartoonists are more, see themselves more humorists, some see themselves more as hard-hitting journalists, some are better at art than others and so even though we have this very small space, even within it, there's a wide variety of ways that it's practiced.

Leading Authorities: Of sort of roles that you can serve. And so how did you come to be the editorial cartoonist? I think I read that you always wanted to be a cartoonist, but I feel like that's maybe one of those things that people maybe say when they're younger, that's something they want to do. But it seems like it could be very hard to make it happen and have such a long lasting, enduring career. So, can you talk a little bit about how you came to be in this position that you're in?

Kal: Yeah, it's a funny thing, because when cartoonists get together, we often ask each other, "How did you get into this?" because every person's story is different because there's no conventional route to become a cartoonist. There's no school for cartooning, there is no graduate school in cartooning, and so everyone's path is completely different. And mine starts back from when I was a child living in Fairfield County, Connecticut. I lived in a town called Norwalk. And the reason why I bring that up is because there's a new book out called "Cartoon County," which is done by a fellow by name Cullen Murphy. His dad was the artist for Prince Valiant, and he talks about what it's like to grow up in a county, my county, that was full of cartoonists, and the county has so many cartoonists who were basically commuting into New York in the 50s and 60s. And those days when Connecticut was inexpensive and all the magazines and newspapers are based in New York. And so, there was a community of people there. So, when I was growing up, I was always interested in drawing. I like the idea of cartooning. And when I was a teenager, the National Museum for Cartoon Art opened in Greenwich, Connecticut about 20 miles from my house. This museum was really a house more than anything, it was a depository for cartoonists to throw the work together. They were making it up as they went along like most cartoonist do. I went down and I would volunteer and I would meet cartoonists that way. So, I suddenly realized that my interest in cartooning could be possibly a profession because I met people, here's a guy I can do that I said to myself, but at the time, I was more interested in doing comic strips. And I did a comic strip in my high school newspaper and a few commentaries in my high school paper. But I was mostly interested in humor. Then went off the university. I went to Harvard and when I was there, I did a comic strip again for the college paper and did some cartoons that were commenting in local stuff there. But it was when I graduated from Harvard, my senior thesis was a 13-minute-long animated cartoon that it based on my comic strip. I always thought that maybe I might make a life as an animator and doing cartoons in that way. But I immediately, upon graduation, led a bicycle tour in the UK. I got me out of the country. I had a bicycle cycled around. And when the tour finished, I stayed cycling around and eventually got a job than semi-professional basketball for an English basketball team called the Brighton Bears. It was great fun being there. Now, I had a work permit, but the team was having financial troubles. And so, then I would draw caricatures of tourists in Trafalgar Square and on Brighton Pier, and started looking for cartooning jobs in London. My first job, believe it or not was with The Economist. I was 20, 21 and they were looking for a cartoonist. I happened to knock on the door and they offered me a job. But there is a funny story on how I got that job. You want me to tell you that story?

Leading Authorities: Yes, please! I imagine you can't exactly just walk in the door and say, "I want to be a cartoonist." And they're like, "Alright, come here sign up!"

Kal: I had gotten a list of art directors, of all the newspapers and magazines in London from a contact. And so, I just went down the list and I had a portfolio of work that I'd done in here in the US, and then also other stuff in the UK. I just would call them up, say, "Hey, I want to show you my portfolio." And I'd gone down every newspaper and the last on the list was The Economist. And I remember I only had about a month left of my work permit, and really, I thought this was not going to happen. So, I show up at The Economist and I'm reading it in the lobby, and in those days The Economist had only just started using pictures. It was basically like reading the Bible. It was gray, turgid text. That was The Economist. And I'm looking through my portfolio and I'm thinking, there's no way anything I've got here, could get them interested. Comic strips? No, that’s not going to work. I had a gag cartoons. No.  I've got animation. No. The only thing I had was maybe half a dozen caricatures that I'd done of Harvard professors. They show them, that was it. And I thought, Okay, last shot. So, I go up to show the art director and he goes, "You know these look pretty interesting. Leave them with me and I'll get back to you." I said, Okay. So, a couple days later, he calls me up and he says, "You're not going to believe this, but we have editors here who know all these guys, and they recognize them. And one of the guys here, he's the president of the Harvard Club of Great Britain and he knew these people. So why don't you come next week for a one-day trial at The Economist?" So, I think this is great, it is a big chance, right? The Wednesday is the press day for The Economist, and so Tuesday night we have basketball practice and the practice would end at 10:00 p.m. and the pubs would close at 10:30 p.m.

If you want to learn more about Kevin “Kal” Kallaugher or think Kal would be a good fit to speak at an upcoming event or meeting, please visit their speaker page. You can also call 1-800-SPEAKER or live chat with a member of our team now.