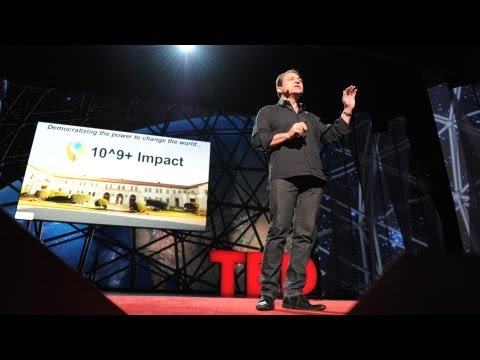 Peter Diamandis takes the stage at the 2012 TED Conference to discuss how abundance is our future. He opens his talk by saying that the news media preferentially feeds us negative stories because that's what our minds pay attention to. There is a very good reason for that - every second of every day our senses bring in way too much data that we can possibly process with our brains. And because nothing is more important to us than survival, the first stop of all of that data is the amygdala - our early warning and danger detector.

In 2014 Fortune Magazine named Peter Diamandis as one of the World's 50 Greatest Leaders. Diamandis is the Founder & Executive Chairman of the XPRIZE Foundation, which leads the world in designing and operating large-scale incentive competitions.  He is also the Co-Founder & Exec Chairman of Singularity University, a graduate-level Silicon Valley institution that counsels the world's leaders on exponentially growing technologies.

Chairman and CEO of the X PRIZE Foundation

Peter Diamandis, the chairman and CEO of the X PRIZE Foundation and the author of best-selling Abundance, is a dynamic inspirational speaker who shows his audience how to drive and incentivize breakthrough thinking in order to achieve clear, measurable results. He is considered a key figure in the development of the personal spaceflight industry, as the first private-sector manned spaceflight was a result of an X PRIZE competition. He has also founded many other leading, commercial space-flight organizations and won myriad awards for his incredible work.
Topics & Types
Innovation Robotics & Drones Technology ESG & Corporate Social Responsibility Disruption & Digital Transformation Growth CEOs TED Speakers
Check Fees & Availability View Profile