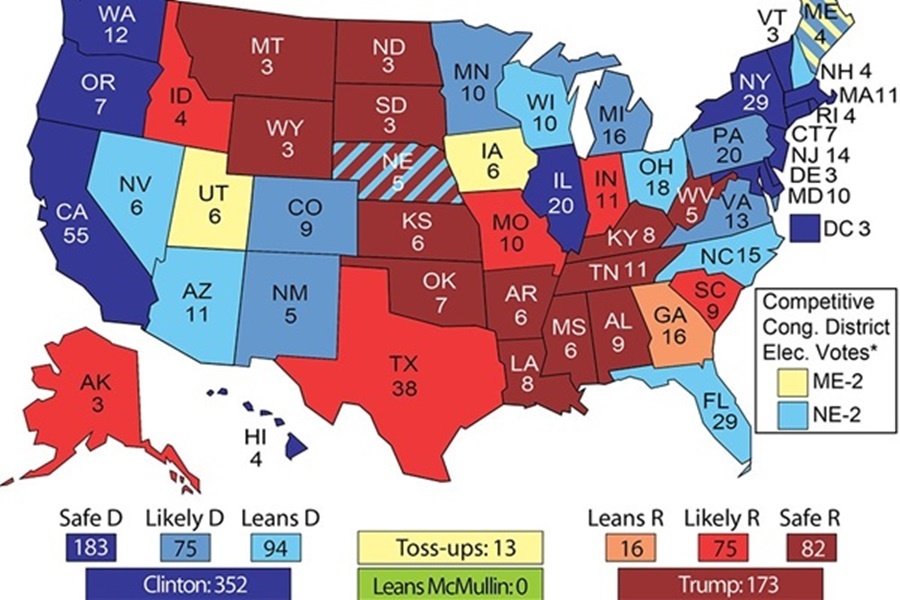 Last week Larry Sabato released the newest Crystal Ball update, and it points straight to Hillary Clinton being the 45th president of the United States. According to HuffPost Pollster and RealClearPolitics, Clinton has a significant lead in national polling and is now up by about six to eight points in both two and four-way presidential matchups. Clinton currently has leads in typically Republican states that she does not need in order to win the election including Florida and North Carolina. And, according to Sabato, times are getting harder for Trump as Alaska, Indiana, Missouri, South Carolina, and Texas are moving from “Safe Republican” to “Likely Republican.”

Arizona, Iowa, and Utah are also on Sabato’s radar. Though it’s already late October, these three states are just now being marked as toss-ups. And while the Clinton campaign is working strategically to win them, the Trump campaign does not have adequate resources to address undecided voters. Also noted by Sabato, Utah is now showing an almost three-way tie among McMullin, Trump, and Clinton. If McMullin were to win there he would be the first non-Democrat or non-Republican to win any state since George Wallace in 1968.

The latest Crystal Ball prediction shows Clinton capturing 352 electoral votes, even more than her previous high water-mark of 348 electoral votes. There is strong evidence to support the idea that no new states are moving towards Trump at this point, and that formerly tried-and-true Republican states are showing very thin, soft support.