Our Conversation With Jon Steinberg 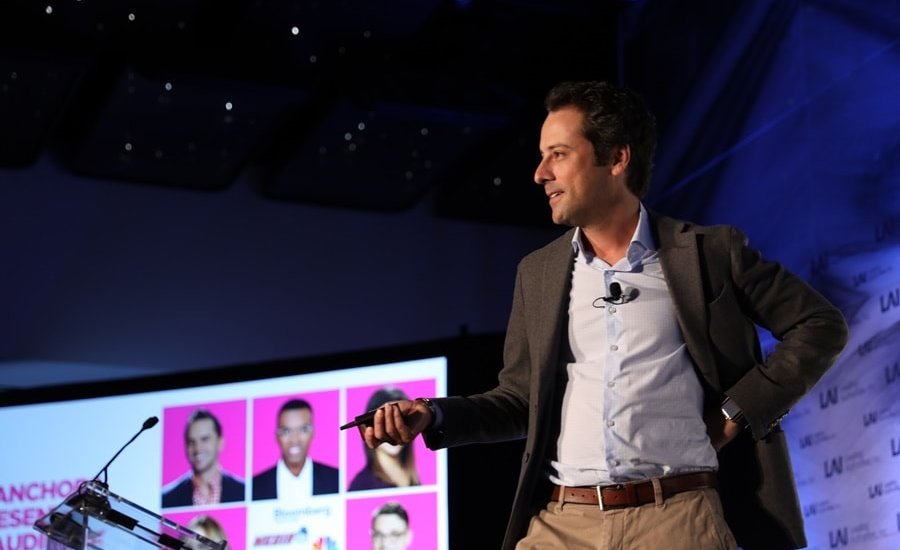 Jon Steinberg, the President and CEO of Cheddar and former President and COO of Buzzfeed, was a keynote speaker at the 2018 Inspire: Leading Authorities' Day of Ideas conference on February 23rd.

One of our most popular business innovation speakers and a dynamic leader whose companies have revolutionized modern digital marketing, Jon Steinberg, founded Cheddar, the first “post-cable” TV network after serving as the COO of Buzzfeed during its epic rise between 2010 to 2014. Jon's latest venture, Cheddar, launched in early 2016. It streams live news video exclusively on social media, and, despite being a new media player, had a valuation of 85 million as of earlier this year.

Jon is a high-energy and refreshingly irreverent speaker who mixes hard data and humorous anecdotes to illustrate lessons on skating to the puck and getting ahead of industry trends. During his talk, Jon discussed the shifting digital landscape and the future of media. He offered the audience a rare look at how an innovator’s mind works as they seek out holes in the market and make big business bets on them. He also shared insights on the early days of Buzzfeed and how his team grew it, why the future of media is “appointment only,” and why the next big thing “always looks like a toy at first.”

Why Cheddar, what’s the inspiration for the name?
I love marketing, and cheddar means money. I also just think cheese is funny. And I wanted people to either love the name or think it was unbelievably stupid. The only thing you can’t be in media is milk toast – and everybody either likes the name or thinks it’s stupid. The other thing people notice is, the logo, is actually Swiss cheese … or like a hybrid cheddar. The reason is because when I self-funded the company, initially I was paying these designers and I couldn’t get it the way I liked. Cheddar cheese looks like a trivial pursuit piece, but I couldn’t make it look like that. Now, on the floor of the New York Stock exchange, the traders call me Swiss cheddar. That’s my name to them!

One of the worst parts of cable news is the partisanship. Do you make an effort to avoid this so as to not alienate half of the population?
I absolutely agree with you, and I think that there was a lot of after the election when people thought that Trump might normalize, a lot of my investors said, you should do a young conservative news network, a young fox news. I didn’t want to do it because I didn’t know how to have the company I wanted to have with the free exchange of ideas and then inflict a political view on it. Obviously now where Trump is at I’m very glad I didn’t do that, and I also think that a-partisan is where the open space is. MSNBC is unbelievably liberal, FOX News is crazy, and CNN is like really pandering, you know? So to me, I think not torturing people – I do need to tell them what he tweeted, he is the President of the United States, we do need to tell them what the investigation is, but we don’t need to either defend or claim it’s not true, and then do the panel. So I completely agree with that question.

How do you know if or when to give up on a bet?
There are some bets that are so core to the idea that you rise and fall based on the bet. So, for example, we made a bet early on that there were going to be these skinny bundles in the United States. In the time since we launched the company, Sling was already there, but now there is Direct TV Now, Hulu Live, YouTube TV, Philo, Fubo, and then there’s a couple more. If no one in the United States chooses to adopt skinny bundles and none of them win, our company is a zero. It’s too core to our bet. So there are some where you go to insolvency on, that’s how hard you ride the bet. Other than that, you can’t give the employees whiplash. Which means that you need to change your opinion when new knowledge presents itself, but you can’t do it every week. So there are the bets that are core, and the bets that we change. The bets that we change, we’re mostly vigilant about not giving the employees whiplash.

Do you think HQ will become a live news competitor?
I think what’s amazing about HQ – I’ve never seen a sensation like this in my entire career. And my lead investor is a guy named Jeremy Liew from LightSpeed and he is the lead investor in that company. Those two guys were the founders of Vine, which was sold to Twitter, and they went through two mobile ideas that failed, that petered out, before they hit on this. They have an average minute audience during that 15-minute period most nights of north of 1 million people. Some nights, on the Sunday night game, which is the biggest game, I think it gets as high as 1.8 or even close to 2 million right now. I don’t know if it’s going to be a news thing, but it’s a thing. It’s a thing. They’re doing a financing round, it’s one of the most exciting things I’ve seen in media in my life.

Do you see a future for interactive news?
You know I get asked about interactive a lot. I see a future for these platforms and what these platforms choose to bring will determine the level of interactivity. I’m unbelievably excited about YouTube TV, which is Google’s offering to the market. And whatever Google does they bring an enormous amount of technical competency and creativity to things, and so I think that that’s sort of an unanswered thing right now. I haven’t really worked on that problem as much but I think if you look at HQ, that seems to be what’s working, is having people do trivia and interact and answer questions.

Always evolving and unrelenting in his pursuit of the next big thing, Jon Steinberg is a fantastic choice for companies looking to push the boundaries of what is possible when it comes to marketing, content creation, native advertising, partnerships, and corporate culture.

To learn more about Jon or check his availability and fees for an upcoming event, call us at 1-800-SPEAKER or live chat with a member of our team right now.

To get a better feel for what we covered at our Inspire conference, catch up on anything you may have missed, or learn more about the motivational speakers featured in our lineup:

• Check out our favorite moments from the event, including presentation and Q&A recaps from each of the keynote speakers

• Subscribe to the Leading Authorities' podcast, Speaking Of, and listen to the podcast episodes we recorded with our Inspire speakers