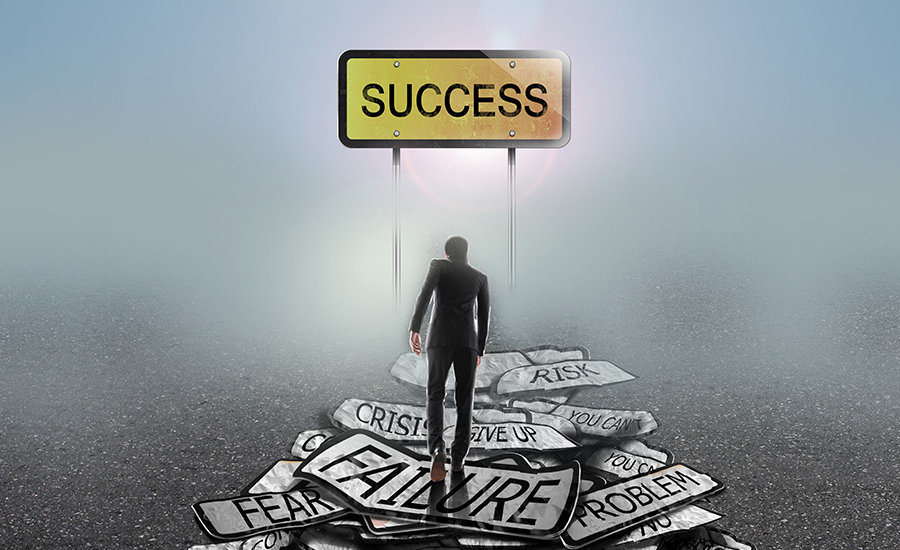 This is a guest blog post authored by Sarah Robb O'Hagan, CEO of Flywheel Sports, Former President of Equinox Fitness, Former Global President of Gatorade, and Former GM and Marketing Director at Nike.

So you’ve failed. Not just a small mistake, or a harmless slip up. No—a big, bad, epic, humiliating screw up!

I’ve experienced plenty of failures in my life. From falling 2 points short of passing my 12th grade piano exam after practicing for freeken months on top of having a broken arm, to being fired not once but twice in my 20s. I am no stranger to the pain and embarrassment that comes with screwing up.

But the crazy thing about failure is, it’s actually NEEDED if you’re gonna really grow. Played correctly, failure can be turned into the most epic dose of high octane fuel we need to push ourselves to the next level.

The way to own and grow from failure is to experience it and realize it won’t kill you, giving you the confidence to chance failing again. The more comfortable we are with failure, the more likely we are to take those life and career changing risks.

But this isn’t the type of thing you’ll learn in business school. No, this training can only be learned through painfully lived experiences. So team, here are some hard learned tips to help you right in the moment as you experience a failure and you’re looking for ways to push through to your next great success.

1. Tell the Truth and Feel the Pain

Ok, so you really frikin blew it. The last thing you probably want to do is go around telling people that you’re a big failure. It’s actually human nature to have an initial desire to tell a lot of people (and yourself) a big story about how it wasn’t your fault. Somehow it feels less painful if you can deflect the blame, right?

Admitting that you screwed up is really, really hard. But ultimately, it is exactly what you need to make failure your fuel. You have to tell the truth to yourself and actually feel, for a moment, that you are a big stinkin’ failure to be able to process and move past your mistake. By telling the truth, you can take your anger and emotion away from blaming others and instead funnel it into the drive to show the world what you’re made off. When you own your big bad failure - all of a sudden you have the freeing feeling of knowing that you are in charge of not letting that happen again.

If you’re having trouble processing your failure, try journaling about your experience. Just the simple act of putting pen to paper and fully admitting what happened can help you move on and turn that anger and disappointment into fresh determination. Write out the whole story, including your contribution, until you start to feel the full emotion of the experience. From there ask yourself: “What did I learn?” and “what will I do differently next time?”

A friend once told me, “When something goes wrong, you get twenty-four hours for a pity party to feel super sorry for yourself. Then it’s time to ask: What are you doing about it?”

In the end, it’s not about the failure, it’s what you do afterwards. Once you’ve admitted what happened, and you’ve repositioned the failure as a learning experience, it’s time to DO SOMETHING. This is the part where you take all the humiliation, anger, sadness, and embarrassment, and turn it into your next step that will push you on the path to greatness. It doesn’t matter how small the step you take forward - just as long as you take one. This will begin your positive momentum towards your next great achievement.

In those tough moments when you feel like you’re never going to recover from a failure, remember: If you haven't failed, you haven't discovered the real potential that lies within you. If you don’t awesomely fail you can’t epically succeed.

Described by the media as everything from “Superwoman undercover” to “The Pied Piper of potential,” Sarah Robb O’Hagan is an executive, activist, entrepreneur, and currently the CEO of Flywheel Sports. She  is the founder of the “Extreme Living” movement,  and a rare blend of fierce businesswoman, cheer leading Mom passionate women’s advocate, and high-energy motivator. In speeches, Sarah lays out a roadmap for becoming the most “extreme” version of yourself by operating at the edge of your potential and by building highly-collaborative, focused, and successful teams and corporations. Drawing on her decades experience at some of the world’s most influential brands including Gatorade, Nike, and Virgin, she shares practical takeaways including how to make failure your fuel, discover your most competitive playing field, get out of line rather than always following conventional wisdom, and bring out the “extreme” in others.

To learn more about Sarah Robb O'Hagan, visit her speaker page, call us at 1-800-Speaker, or chat with a sales representative now.