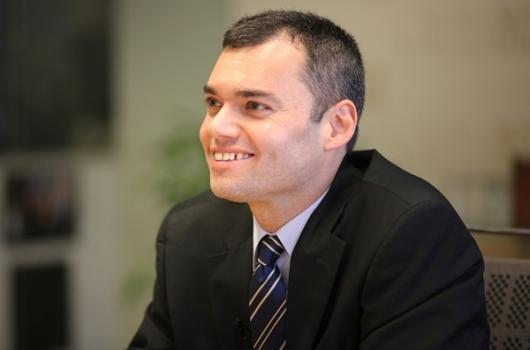 Peter Beinart is one of America’s most highly-regarded commentators on American politics and foreign policy. He is a professor of journalism and political science at The City University of New York, a Senior Fellow at the Foundation for Middle East Peace, editor-at-large for Jewish Currents, a contributor to the Atlantic, and a political commentator for CNN. Beinart burst onto the punditry scene immediately after graduating from Oxford in 1995. Since then, he has been editor of the New Republic magazine, a senior columnist at The Forward, written widely acclaimed books, and been a featured player on the television news circuit for his expertise and articulate analysis. Exclusively represented by Leading Authorities speakers bureau, he addresses politics, foreign policy, elections, and the American-Israel relationship.

Powerful Prose. His first book, The Good Fight: Why Liberals—and Only Liberals—Can Win the War on Terror and Make America Great Again, was published in 2006. His second, The Icarus Syndrome: A History of American Hubris, was published in 2010, and his latest, The Crisis of Zionism, which expands upon his The New York Review of Books essay, “The Failure of the American Jewish Establishment,” was published in April 2013. Madeleine Albright called The Good Fight “a book filled with apt insights and common sense.” Fareed Zakaria called The Icarus Syndrome “lucid, thoughtful and strikingly honest,” and Bill Clinton called The Crisis of Zionism “a deeply important book for anyone who cares about Israel.”

Variety of Platforms. Beinart has contributed to the New York Times, the Wall Street Journal, the Financial Times, the Boston Globe, the Atlantic, TIME, Slate, Reader’s Digest, Die Zeit, Frankfurter Allgemeine Zeitung, and Polity: The Journal of the Northeastern Political Science Studies Association. He is a former Senior Columnist at Ha’aretz and was named “Columnist of the Year” by The Week magazine. Additionally, he has appeared on Meet the Press, This Week, Charlie Rose, The McLaughlin Group, The Colbert Report, MTV, NBC, ABC, CNN, Fox, MSNBC and many other television and radio programs. He has provided commentary for CNN for both Democratic and Republican conventions, and previously gave the Theodore H. White lecture at Harvard’s Kennedy School of Government. He is a Senior Fellow in International Security at the New America Foundation.

Education and Early Career. Beinart graduated from Yale University in 1993, winning a Rhodes scholarship for graduate study at Oxford University. After graduating from University College, Oxford with a master’s in philosophy in international relations, Beinart became The New Republic’s managing editor in 1995. He became senior editor in 1997, and from 1999–2006 served as the magazine’s editor. Beinart was a senior fellow at the Council on Foreign Relations from 2007–2009.

Peter Beinart: The Rise of Insurrectionists

Peter Beinart: The Rise of Insurrectionists

Peter Beinart on Future Trends in both Political Parties

How Government Failures Will Impact the Future of American Politics. Government failures produce political upheavals. And according to Peter Beinart, we’re in the middle of one of America’s three great government failures since 2000. In this talk, he discusses how these three failures – America’s invasion of Iraq, the 2008-2009 financial crisis, and the COVID-19 pandemic – produce long-term revolutions or near-revolutions in America’s two major political parties. In the years to come, he predicts how these failures will further destabilize each of the parties and give rise to more anti-establishment candidates, breaking down how the Democratic and Republican parties will shift in their response. If you thought the rise of President Trump and Sanders was destabilizing, just wait.

Politics Today. Peter Beinart offers a comprehensive picture of the political landscape. He offers an analysis of where the parties are and what their futures hold for them, including evaluating the perils of incumbency and the demographic changes that are affecting electoral results. With an independent perspective, he offers an original viewpoint on the current administration’s agenda and its challenges in achieving it. Beinart’s balanced scrutiny of the issues and current events gives audiences an entertaining and edifying experience they won’t soon forget.

The Demographics of Politics. Beinart offers audiences unique perspectives on the demographic shifts affecting politics including the rise of populism. He addresses how cultural changes are favoring Democrats and the emergence of non-traditional party structures, plus what traditional Republicans can do to minimize their loss of influence. Looking at both younger voters and minorities, Beinart gives unique and compelling insight into this transition in American politics, outlining what these groups care about and how changes in American society will affect future elections and the course of government policy.

American Foreign Policy. Beinart addresses American foreign policy and America’s place on the world stage, covering issues like how we must adapt to being relatively less powerful – we are not the only major player anymore and cannot will situations to go our way as we once had in the past. Beinart talks about how we navigate this new world and how we temper our can-do spirit with a more realistic assessment of ourselves and our fallibility while still making the most out of our opportunities and standing. He rounds this talk out by explaining how these issues affect businesses and politics alike.

The Future of Israel. As Jewish settlements grow and the West Bank becomes more and more inseparable from Israel, questions about Israel’s future mount. Will Israel annex the West Bank? Is territorial withdrawal, and the creation of a Palestinian state, still possible? Can Israel reconcile its security needs with its founding imperative to be a democratic Jewish state.

The Future of American Jews. Since the 1967 war, major American Jewish organizations have enthusiastically rallied behind Israel, claiming it is in under constant threat. But many younger American Jews see Israel in a different light. In their eyes, Israel is not a victim but a strong military power that is presiding over an undemocratic occupation of the West Bank. What will this schism between the leadership and the broader community mean for American Jewry? Will American Jews lose interest in Israel? Or can younger American Jews reconcile liberalism and Zionism in a new age?

The Rise of the New New Left

Why America is Moving Left

He did a terrific job in the panel and I think the audience really connected with what he was saying. There were several moments when he drew loud applause. For me, the highlight of the conversation was his exchange with Yousef about the question of peace in a single state. I think Peter's point about the actual experience of binational states is really important. What he said about realistic future two-state advocacy focusing on the UN also resonated with me a lot, and made me hopeful about the possibilities that still exist when the old diplomatic formula has clearly not worked.

The Good Fight:Why Liberals-and Only Liberals-Can Win the War on Terror and Make America Great Again

The Icarus Syndrome: A History of American Hubris