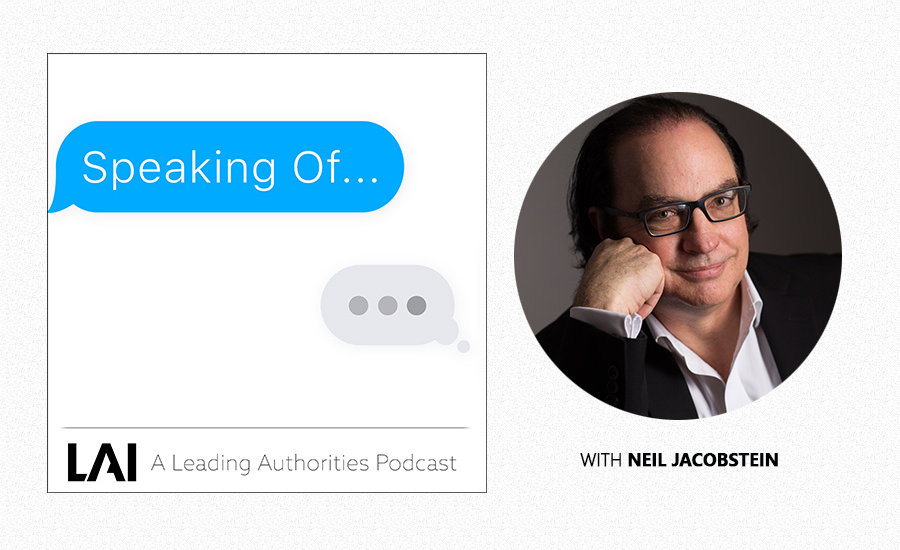 In this first ever “mini episode” of our podcast, filmed backstage at an event in DC where Neil was presenting, he talks about why it's not all doom and gloom, and why, despite the fact that there is always a risk of abuse that comes with any powerful, new technology, AI has the potential to a lot more good than harm. Neil discusses how AI will improve healthcare and remove language barriers, as well as when to expect to see robots actually rolled out as deliverymen, drivers, and more.

Plus, we talk to Neil about the ways technology will continue to make life better in the coming years, despite media reports that seem to the contrary. Listen now:

Here is the full transcription of this podcast episode:

When you think of robots in AI, where does your mind go? I know for me, I don't picture algorithms or data mining or anything like that. I see the robots taking over the world and shows like HBO's West world. Here's a particularly creepy clip from season 1. [Clip]

Leading Authorities: The tension in that scene is the same tension that's at the heart of any meaningful debate about the future of AI. Questions like, how far is too far? And, at what point do humans become replaceable? Today we talk through some of these issues with Neil Jacobstein, who chairs the artificial intelligence and robotics track at Singularity University. That means he spends his days researching, writing and talking about all the ways robots and AI will change human life as we know it. I promise it's not as scary as it sounds. So, if you've ever wondered when robot maids will become a reality, what career track to tell your grandchildren to pursue, or which industries are probably going to be the first to go, Neil is the person to ask. We touch on all of it today. You're listening to Speaking Of..., where we sit down with innovators and thought leaders to talk about ideas that are changing the world. I'm your host, Maddie Glading. Thank you so much, Neil Jacobstein for joining us. We're here in DC at the Watergate Hotel at the Inspire conference. We're very excited to have you with us.

Neil Jacobstein: Happy to be here.

Leading Authorities: So, let's just jump right into it. You are a robotics and artificial intelligence expert. I think this is a topic that causes a lot of unease for people because of sensationalized news reports or television shows. Tell us what do people need to understand about AI where we are and where we're going.

Neil Jacobstein: Well, I think the most important thing for people to understand about AI is that most of the world's people that interact with technology are interested in building up civilization, not tearing it down and doing most malicious things that they can think of doing with AI or robotics. And because of that, we get enormous benefit from AI. We already have AIS helping in medical diagnosis. We have AIS that assist in machine translation. We have AIS that are in self driving cars. Self-driving cars will become the norm over the next 10 years or so. And we are going to find that AIS are helping us in virtually every area of human endeavor, and robots will be helping us with various intersections of manual labor and our activities like construction and areas even like surgery. It's important for people to realize that with any powerful technology, there are potentials for abuse, but that most people are not signed up to abuse the technology in every clever way they can. Most people are signed up to creating a more beautiful nuanced and livable world. And what we need to do is to build AIS and other systems that monitor for malicious behavior and try to proactively prevent malicious behavior before it occurs. That's precisely what we do with anti-virus software because all the viruses and worms that would try to attack your data center or your computer are made of little snippets of AI. And the thing that we shut them down with and detect their behavior with are also AIS. So that's a predator prey. CY call of more sophisticated as.

Leading Authorities: Interesting, I'm sure you know, we all see these Boston Dynamics robot videos that go viral and make us sort of question what's coming next? What types of robots or AIS are actually going to? What are we going to actually be seeing in society within the next 10 or 15 years?

Leading Authorities: So we'll be looking even no.

Neil Jacobstein: It's fine, but it gives us a lot of latitude about what you'll be seeing. Let me just tell you about some of the things that you're saying today, and then what I think you'll see in the future. We already have robot creators like the pepper robot inside of commercial banks, mostly in Japan currently, but they're being rolled out across the world. We have robots that currently are systems that allow surgeons to do a better job doing surgery from companies like intuitive surgical, but eventually, we'll be seeing robots actually doing the surgery itself, guided by surgeons and under the auspices of surgeons. We have AIS that do machine translation, but they don't necessarily have deep comprehension of the text that they're translating. And I think over the next 110 years, we're going to see AIS with increasingly nuanced and sophisticated understanding of the text that they translate their ability to do natural language understanding will be improving on an exponential curve, basically doubling in price performance every 18 to 24 months. Wow.

So it'll be less... if I stayed a hotel in Los Angeles once in a little robot, once I checked in came and brought me a chocolate bar, it's going to be less of the gimmicky and actually more of the real hard work that's Alito shift. That's it, I think we'll see robots used as companions, and we'll see robots used as assistants in hospitals. We have robots already delivering food and drugs and things like that in the hospitals, but I think we'll see them increasingly able to participate as assistance in the hospitals.

Neil Jacobstein: Well, I think there always will be a continuous improvement cycle to improve these systems independent of the area that they get deployed in. There's an area that I think is going to be transformed radically, and that's primates driving cars. So, humans drive cars and we kill 102 million of our fellow human beings every year around the globe. Now, if we had a war that killed 120 million people or attack on institutions that killed one point to million people annually, you would see people protesting on college campuses across the world. But we do that with our cars and you barely here squeak about that.

And it's just an area, and the reason is that it's baseline risk and we tend to pay attention to sensationalist news with far less people being affected. Then we do with a chronic background deaths that could be prevented in this case, by self-driving cars and.

Neil Jacobstein: I was just pointing to that we didn't evolve for driving cars. We evolved under very different circumstances.

Leading Authorities: Okay, so our skill set on driving cars is very limited. The match is not a perfect match to.

Neil Jacobstein: Driving, yeah, and the metric of how imperfect that match is, is the 102 million people that we kill globally and the 40,000 plus that we kill in the US every year. It's like a slaughter that we barely pay attention to while we pay attention to all these other things that have far less consequence.

Leading Authorities: Are there any other areas that maybe don't get enough attention that you think are going to receive more attention with AI.

Neil Jacobstein: Yes, an example would be misdiagnosis or drugs that are prescribed, that have negative drug side effects. We already have some AIS that do a reasonable job at that, but we're going to get better at that. And I think we're going to see areas of the world that are underserved in terms of doctors, population suddenly get access to world class diagnosis delivered through the web, onto smartphones, like in Africa and parts of remote parts of Asia and South America. And those people will have access to AI diagnosticians that are updated daily, in fact, several times a day, maybe even in real time. And if you go to a doctor of advanced age, it's unlikely that that person will be updated several times a day on the latest medical literature. So.

Leading Authorities: You spend all day every day sort of living, breathing, AI. What in this field are you most excited about right now?

Neil Jacobstein: Well, I think there are two things. One is the ability to address humanities grand challenges. I think that we tend to see problems like poverty and climate change and energy shortages, and distribution problems as being endemic and very hard to change, and even global epidemics as being very hard to stop and they are challenging, but they're not impossible to at least rapidly detect and respond to. And I think that we're going to be able to address our grand challenge problems in a much more effective way when we have increased real time intelligence to intervene in some of these problems. Even something like energy is often a storage problem rather than an absolute problem of the amount of energy from the sun hitting the earth. And I think we'll build better and better batteries and better alternative storage systems and distribution systems, and we'll be able to provide abundant energy for people will be able to provide abundant education for people in healthcare and be able to rapidly respond to crisis so that we don't have uncoordinated responses to earthquake spies, hurricanes, etcetera. We won't be able to stop those things, but we will be able to respond to them in a much more effective way.

Leading Authorities: It's amazing. Alright, well Neil, this has been great. Thank you so much for your time today.

Leading Authorities: Great. Thank you for being here.

Leading Authorities: Thanks so much for listening to our conversation with Neil. Today's episode was a bit of a mini episode. We recorded it backstage at an event in DC. So, if you want to learn more about, I'll check out our website leadingauthorities.com, and be sure to subscribe to the podcast or leave us a review wherever you get your podcasts. We would love to hear from you

If you want to learn more about Neil, or book him to speak at an upcoming event or meeting, call us at 1-800-SPEAKER or live chat with a member of our team right now.