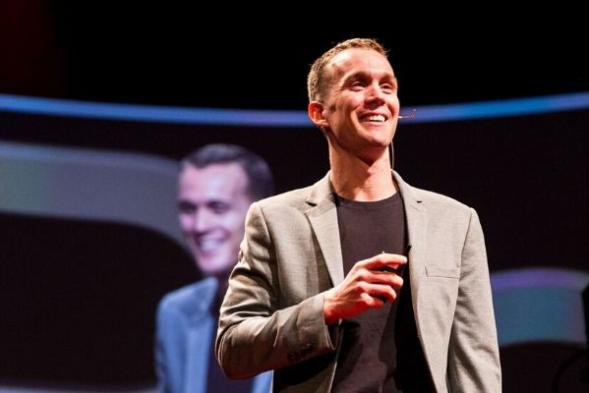 LOCATION/TRAVELS FROM: WY
* This specific fee falls within this range. Ranges are presented as a guideline only. Speaker fees are subject to change without notice. For an exact quote, please contact your Leading Authorities representative.

Colin O’Brady is professional endurance athlete and a foremost expert on mindset. He is a five-time world record holder and former professional triathlete, Yale University graduate, author, and highly sought-after public speaker. Incredibly, his world records only came after his life was tragically derailed by a fire in Thailand, leaving him so badly injured that doctors warned he might never walk again normally.

O’Brady grew up exploring the mountains of the Pacific Northwest and cultivated a passion for adventure in the outdoors. His success swimming in Oregon led him to Yale University. After years as a professional triathlete, he returned to his first love – the mountains. In 2016 O’Brady conquered the speed records for the Explorers Grand Slam and Seven Summits, a global mountaineering challenge to climb the tallest mountain on each continent including Mt. Everest and ski to the North and South Poles. In 2018 Colin shattered the speed record for the 50 High Points Challenge when he summited the tallest point in each of the 50 U.S. states in just 21 days.

On December 26, 2018 O’Brady became a global media sensation when he became the first person in history to complete what was considered impossible. He crossed the landmass of Antarctica solo and completely man-powered, unaided by kites or resupplies. He accomplished the feat in 54 days, covering more than 930 miles along the way, including a heroic 77-mile, 32-hour push without sleep to finish the crossing. Throughout the nearly two-month journey, O’Brady never took a full day off. The New York Times called O’Brady’s most recent success “one of the most remarkable achievements in polar history.” Colin shares his jaw-dropping story from triumphant recovery to record-setting crossing of Antarctica in his book, The Impossible First: From Fire to Ice – Crossing Antarctica Alone.

In December 2019, Colin achieved yet another world record – the world’s first human-powered ocean row across Drake Passage, from the southern tip of South America to Antarctica. In just a few weeks, he along with five other athletes completed the journey, documented live by Discovery Channel through a 14-part series entitled The Impossible Row.

As one of America’s most experienced endurance athletes and an inspiring entrepreneur, O’Brady embodies what it means to overcome obstacles, dream big, set goals, conquer mindset, unlock potential, and never give up.

Colin uses his athletic pursuits and platform to fuel his charitable work. His non-profit Beyond 7/2 works to inspire others to unlock their potential, lead active and healthy lives, and pursue their biggest dreams. His TED talk has been viewed over 1.5 million times.

Change Your Mindset and Achieve Anything

Change Your Mindset and Achieve Anything

My Adventure Across Antarctica

How Colin O'Brady Mentally Prepared for His Antarctic Feat

What’s Your Everest?: Goal Setting and Overcoming Obstacles
Striving to reach the next level? What is it that holds you or your team back? What’s your Mt. Everest and what stands in the way of you achieving it? What is the motivation you need to perform at the highest level? These are the questions that many of us struggle with at work and in our personal lives. Colin will bring you and your team on his harrowing journey from being told he might never walk normally again to climbing the highest mountain on each of the seven continents and becoming the world’s first person to cross Antarctica solo, unsupported, and unaided. Prepare for your audience to be inspired, amazed, and energized as they are empowered to discover and define what their personal Everest is—and receive the tools they need to conquer it.

Be Possible: Change Your Mindset, Achieve Anything
There is a quote Colin continually shares: “He who says he can, and he who says he can’t are both usually right.” Building high-functioning teams and high-performing leaders always begins with mindset. Colin has been on adventures that have taken him around the world to some of the harshest and most remote environments on the planet. At every step, Colin was confronted with hardships, both internal and external. It was in the face of that adversity that he found that the impossible was possible. This keynote isn’t about the achievements of Colin, but instead about showing how ordinary people have the capacity to do extraordinary things. Find out what it takes to be a leader, to overcome self-doubt and closed-mindedness to reach peak performance, and how anything is possible if you set your mind to it.

Stronger Together: Harnessing Leadership & Collaboration
Colin O’Brady’s whole life has led him to world record success, but unlike his solo journey across Antarctica at the end of 2018, he hasn’t been alone. Whether he was walking across the unpredictable frozen tundra of Antarctica or taking his first step to walk after a tragic accident, he has always had a team supporting his efforts. Colin knows that in order to succeed, you need a high-performing team that understands how to work together and seamlessly conquer the challenges that are sure to arise along the way. In this talk, you will learn how to build effective teams and strengthen the ones that already exist. Colin dives deeper into success principles by illuminating the benefits of teamwork, team building, leadership, and risk management to ultimately achieve success, whether you’re at the top of the world on the summit of Mt. Everest, at the bottom of the globe in Antarctica, or anywhere in between.

O'Brady Is First To Complete Solo, Unassisted Trek Across Antarctica