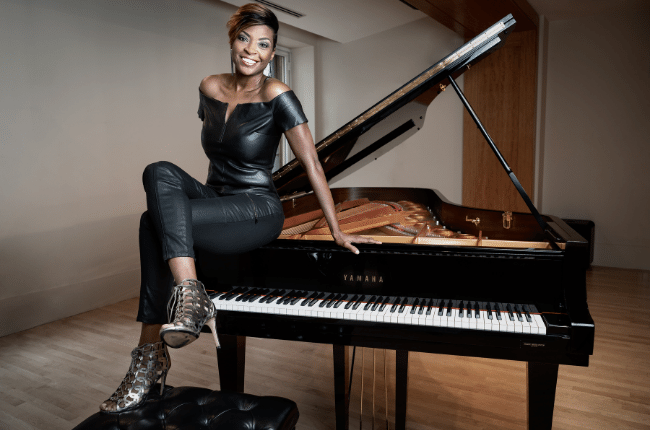 Jade Simmons is a creator of transformational experiences designed to activate audiences into becoming the biggest, boldest version of themselves possible. The world-class concert artist has been called a “musical force of nature” (Yamaha Music) with an “uncanny ability to connect with the sounds of today” (Seattle Times). Jade is the CEO of Jade Media Global, a revolutionary live experience and global content distribution Company specializing in 360º personal development and strategic transformation.

During her early career after graduating from Northwestern and Rice Universities, she performed in recital and with orchestra as a classical pianist in renowned halls, including the hallowed ones of the White House and the US Supreme Court. Following an artistic epiphany, she pivoted from playing the piano to impress audiences, using music as the vehicle by which to provide the inspiration, entertainment, and transformation that profoundly moves them instead.

Nicknamed “Classical Music’s #1 Maverick,” her electrifying, genre-bending concert adventures span Rachmaninoff all the way to rap and include virtuoso storytelling, uncommon insights, and boundless inspiration. Today, Jade’s experiences not only delight concert audiences, but her dazzling, high-impact presentations are fast becoming the go-to fuel for organizations looking to reconnect their people to greater purpose, inspire seismic shifts in mindset, and activate their teams and leaders to instantly start living more consequential lives of impact.

Recently named one of the Best Keynote Speakers of 2019, 2020, and 2021, Jade’s impact spans a multitude of industries and transcends audience demographics. The world’s superlative brands and organizations from financial services, biotech, entertainment, education, energy and beyond are bringing Jade in. The born storyteller is also a stellar mindset strategist fluent in the language of high achievers.

In her inimitable career as a concert pianist, Jade has remained committed to expanding the boundaries of Classical music and its presentation, and as a result she has revolutionized the concert platform. Today, her notably diverse audiences have come to expect creative projects backed by riveting performances.

Ms. Simmons has toured the US extensively in recital and with orchestra, highlighted by performances at venues as wide-ranging as Ravinia, the Chicago Sinfoniettain Symphony Hall, New York's Town Hall, Detroit Institute of Arts, and the White House. She has been named one of the Best of South By Southwest and has also received the Sphinx Organization's Medal of Excellence in a concert held at the US Supreme Court and hosted by Justice Sona Sotomayor.

Often the first, the founder, or at the forefront, Jade was the first New Music/New Places fellow for the prestigious Concert Artist Guild, and she was the original face of the legendary Van Cliburn International Piano competition’s webcast. She’s also the beloved voice of Decomposed, the critically acclaimed American Public Media podcast that turned classic music storytelling on its head. The show has been heralded in Time, Esquire, Indie Wire, and BBC America.

Simmons continues to make an unexpected impact on and away from the stage. As an ordained minister and author, she challenges us to pray bigger with the best-selling Audacious Prayers for World Changers. An equal-opportunity disrupter, in 2020, the Maverick made her boldest leap yet as founder of Operation Restoration, which powered her run as an Independent candidate for President of the United States. Her platforms prioritize people and unifying policies over politics as usual. Who Is Jade Simmons?

Jade Simmons For Your Upcoming Event

The JMG Approach to Diversity

Jade's A Sure Thing

An empowering line-up of uncommon mindset shifts and brave, new modes of operation designed to shift your people from status quo huggers to empowered trailblazers in one fell swoop. Jade powerfully redefines purpose, encourages the discovery of originality & the inclusion of improvisation, and challenges listeners to embrace the possibility of bringing their whole selves to every table, every time. This presentation is perfect for organizations looking to motivate their people to new heights personally and bigger results professionally.

Audacity: Dare to Lead on Purpose

Incredible things happen when motivated leaders dealing with the pressures of monumental change are given the tools to connect, improvise, and unlock the undiscovered gifts of their team members. Jade gives transformative strategies to supercharge atmospheres that cultivate excellence, proactivity, innovation, and productivity. This presentation, with its emphasis on emboldening and revitalizing executives, team leads, and managers, is perfect for organizations looking to offer something other than run-of-the-mill leadership training.

Dynamic, Disruptive Diversity: A Bold Approach to Harnessing the Power of Differences

Jade’s leading the charge for diversification of the workplace with a powerfully positive approach that dares to eschew guilt and obligation in favor of curiosity and authentic connectivity. Her own uncommon story of being a black, female, classical pianist in a traditionally monolithic industry yields loads of applicable insights and mindset shifts perfect for organizations determined to be at the forefront of the diversity and inclusion movement. If you are ready to spark transformative conversations and unleash the power of storytelling to form unbreakable bonds in the workplace that result in breakthrough personally and professionally, this is the presentation for you.

NEW! The Smell of Breakthrough

Jade’s newest transformational main stage keynote experience is a masterclass in the art of reframing challenges to gain invaluable insights into how to best prepare for the season
ahead. In this presentation, Jade brilliantly sets your attendees up to be able to predict when breakthrough is around the corner, to position for it powerfully, and to lead their teams in sustainable strategies that keep the breakthrough coming! With all new music, creative visuals, and the same stunning combination of inspiration, innovation and entertainment, Breakthrough is designed to pique all of the senses and stoke the biggest fires in the hearts and minds of your attendees.

Choose from a bold buffet of themes and topics to create something unforgettable just for your organization! Jade operates within 4 main pillars for her “from scratch” customized presentations. She then takes your event themes and your requested “areas of focus” and creates a one-of-a-kind presentation designed just for your people.