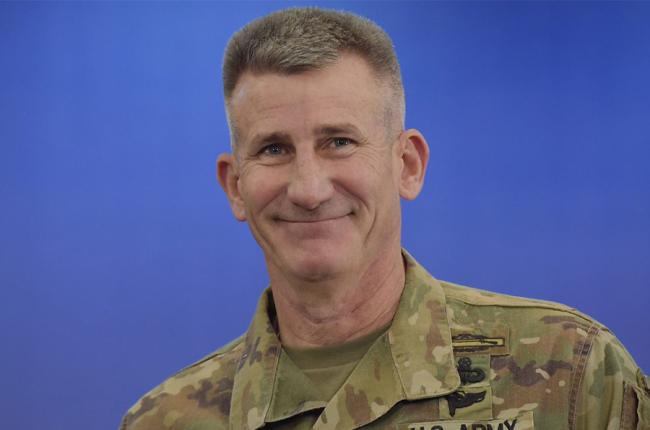 During nearly two and a half years as commander of the 41-nation force in Afghanistan, Nicholson built on his previous three tours to work with his U.S., Afghan and Coalition colleagues to formulate new policy and reform the Afghan Security forces to include doubling the size of the Afghan special forces and nearly tripling their air force. He oversaw a budget of $17 billion, led 22,000 international troops, and closely advised over 330,00 Afghan security forces.

Nicholson’s commitment as a soldier and to Afghanistan is in his blood. A statue of his ancestor British Brigadier General John Nicholson, who served in the British East India Company in the 19th century, stands in Peshawar, Pakistan, and his grave is in the Nicholson Cemetery in New Delhi, India.  He is the son of a Vietnam-era U.S. Army general, started his service in Afghanistan as a colonel in the eastern mountains in 2006, and served two additional tours before becoming the overall commander in 2016.

Nicholson commanded the storied 82d Airborne Division and helped restore the readiness of the Nation’s Global Response Force. As the Commander of NATO Allied Land Command, headquartered in Turkey, he was responsible for commanding multiple NATO Corps in the event of large-scale war in Europe. He was involved in the training and readiness of the nine NATO Corps as well as drafting defensive plans for NATO in the face of emergent threats.

Today, drawing on decades of leadership experience leading large military units and allied coalitions in times of complexity and risk, Nicholson’s speeches provide enduring lessons that are highly relevant to improving strategic thinking, strengthening results through collaboration and developing resilient colleagues who will thrive in today’s fast-paced global operating environment. His insights are not just for military historians. They are for anyone who wants to meet the challenges of leadership in these complex times.

“The knowledge and insights gained in my military career are about far more than war, terrorism and striving for peace,” says Nicholson. “Learning how to unite people to achieve common goals under the most adverse circumstances or how to identify leaders at every level and instill in them a shared vision of a better future is key to many endeavors, civilian as well as military.”

With looks from the command bunker in Afghanistan to the corridors of the Pentagon and the Alliance headquarters in Brussels, Nicholson opens a window into a unique moment of political-military leadership dynamics. With over 36 years of active duty under seven Presidents, Gen. Nicholson commanded at every level of the U.S. Army and is one of our nation’s most combat-seasoned leaders. Taking audiences on the journey of a lifetime, Nicholson explores what a career that started as a paratrooper at the tip of the spear and culminated with Presidential appointments has taught him about leading massive organizations and building team cohesion and shared vision.

Throughout his speeches, Nicholson travels from his former office in the Pentagon—destroyed by a hijacked airliner on 9/11—to the U.S. outposts in the treacherous mountain regions of Afghanistan, and back again. Packed with heart-pounding stories and lessons that leave a lasting impact, Gen. Nicholson’s speeches rouse individual and groups to be and do better for their teams and their organizations. He is exclusively represented by Leading Authorities speakers bureau.

Gen. Nicholson’s six years in Afghanistan also include service as the International Security Assistance Force (ISAF) Deputy Chief of Staff for Operations, in Kandahar as the Deputy Commander of ISAF’s Regional Command South and in Jalalabad and Khowst as the Commander of Task Force Spartan, responsible for Eastern Afghanistan. Gen. Nicholson spent much of his service in the joint, multinational, and interagency arena, working closely with colleagues in the State Department, the Intelligence Agencies, the Development community, Law Enforcement, the National Security Staff, and numerous non-governmental organizations. His other assignments include Deputy Director of Joint IED Defeat Organization, Director of the Pakistan-Afghanistan Coordination Cell and Deputy Director for Operations, J3 on the Joint Staff, work on personal staffs of the Secretary of the Army, the Chief of Staff of the Army, and the Commander of U.S. Army Europe as well as the George C. Marshall Center for European Security under U.S. European Command.

He has testified before various Congressional Committees: The House Committee on Oversight and Government, the Senate Committee on Foreign Relations and the Senate Armed Services Committee. He has hosted and briefed numerous Congressional Delegations to Afghanistan and participated in numerous NATO North Atlantic Council sessions with Ambassadors, Chiefs of Defense, Defense Ministers, Foreign Ministers, and Heads of Government.

He has been interviewed and covered by many major US and international media outlets including 60 Minutes, CNN, FOX, MSNBC, New York Times, Washington Post, Al Jazeera, Der Spiegel, BBC to name but a few.

A West Point graduate who was the highest-ranking cadet or First Captain of the class of 1982, Gen. Nicholson also has a BA in History from Georgetown University, an MA in Operational Art from the School for Advanced Military Studies, and an MA in National Security Studies from the National War College.  He currently serves in the U.S. National Defense University Capstone Program as a mentor to rising general officers/flag officers of the US Military and as Adjunct Faculty at Harvard University’s JFK Kennedy School of Government Belfer Center Executive Education Program. 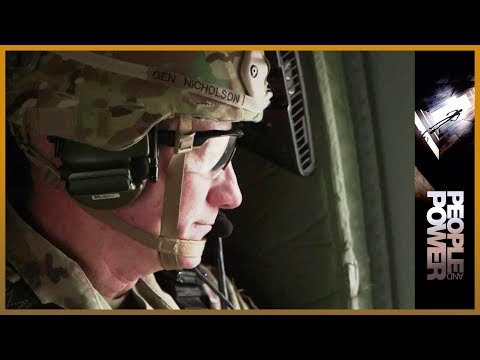 Leading to Win.
General John Nicholson led a 41-nation war coalition effort for nearly two-and-a-half years, managing a shifting war landscape, training American and foreign troops, and balancing the strategies and methodologies of a global enterprise focused on beating back a nonconformist enemy force. Here, General Nicholson shares the keys to successful leadership within a complex organization adapting to rapidly-changing circumstances and goals. Insightful and eye-opening, his presentation will leave you with a newfound respect for the military heroes who continue to fight overseas and the art of effective leadership.

Building Unity of Effort.
In today’s global marketplace, organizational success often depends upon the ability to adapt and stay ahead of the constant disruption that is upending traditional business models. And unity of effort, team cohesion, and shared visualization is perhaps the most essential ingredient to this. Here, General Nicholson uses anecdotes from his time in Afghanistan and on Capitol Hill to illustrate what it takes to build a shared sense of purpose. Helping organizations who are struggling to find a collaborative and cohesive culture, Nicholson provides a roadmap for building more effective teamwork, leaving audiences excited to charge forward confident in their ability to align themselves for a better outcome and a better future.

Geopolitics: America’s Role in a 21st Century Global Order.
America is now in the 17th year of a war that has raged on in the Middle East. At the same time, newfound adversaries are rising in Russia, Iran, North Korea, and China. Here, Nicholson offers his high-level overview of the most-urgent threats facing America and democracy globally. A fascinating look at geopolitics from one of our most-experienced Generals, this is a fascinating talk for audiences that need to better understand the current and coming global operating environment.