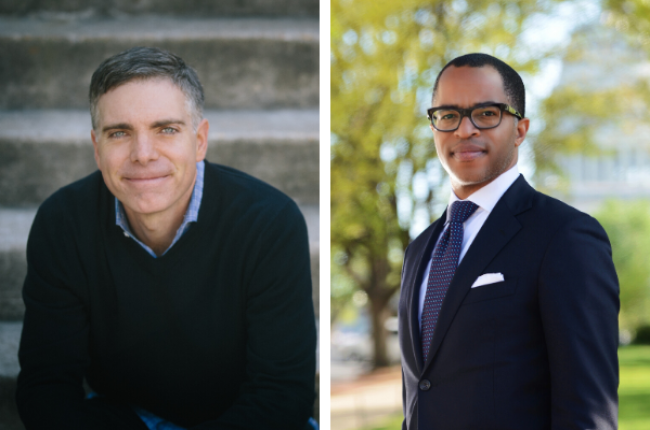 Successful political commentators and journalists, Jonathan Capehart and Matt Lewis, team up to deliver a presentation that offers perspectives from all sides of the aisle on today’s hot-button political issues.

Jonathan Capehart is a Pulitzer Prize-winning journalist, member of The Washington Post editorial board, MSNBC contributor and frequent substitute anchor, and host of the Post’s Cape Up podcast. Capehart has interviewed some of the most important political leaders and cultural icons, including Vice President Joe Biden, former Attorney General Loretta Lynch, former Secretary of State Hillary Clinton, and House Minority Leader Nancy Pelosi. Known for his insightful, hard-hitting reporting, as well as his witty and thought-provoking commentary, Capehart regularly talks with newsmakers about the day’s biggest political and cultural issues, touching on hot-button topics including how race, religion, age, gender, and cultural identity are redrawing the lines that both divide and unite America.

Matt K. Lewis is a center-right critic of American politics and pop culture, Senior Columnist for the Daily Beast and author of the book, Too Dumb to Fail: How the GOP Betrayed the Reagan Revolution to Win Elections (and How It Can Reclaim Its Conservative Roots). Host of the podcast, Matt Lewis and the News, where he dissects the day’s issues with other thinkers, others, and newsmakers, he has earned a reputation as an “independently minded” (Columbia Journalism Review) and “intellectually honest” commentator (Ben Adler, Newsweek). Named one of the “50 Best Conservative Columnists” by RightWingNews, Lewis brings his funny, off-the-cuff style to the current political landscape, providing a candid evaluation of the future of the Republican Party.

Jonathan Capehart and Matt Lewis are not afraid to tell it like it is on television, in news publications, on their podcasts, as well as in their presentations on stage. Offering perspectives from all sides of the aisle on today’s hot-button issues, these two candid journalists make up a power duo that thoughtfully debate the issues shaping the current political landscape – delivering a lens into both parties’ perspectives while keeping the country’s best interests at the forefront of the conversation. Sharing insights gained from their careers in political journalism, Capehart and Lewis speak expertly on the topics facing politics and culture today and share how this will impact the issues of tomorrow – leaving audiences entertained and with a greater understanding (and perhaps a new perspective) on the daily news.