Former Governor of Virginia and Former Chairman of the DNC 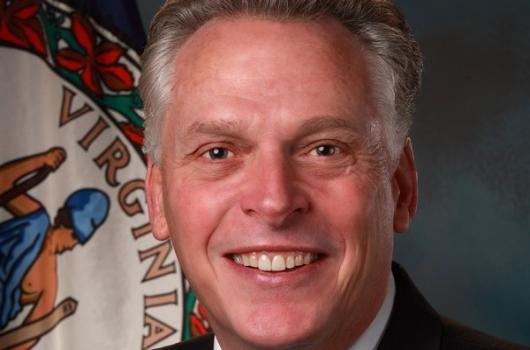 In November 2013, Terry McAuliffe was elected the 72nd Governor of the Commonwealth of Virginia.

As Governor, McAuliffe focused on equality for all Virginians, enhancing the quality of life, and building a new diversified economy that made economic opportunity a right, not a privilege.

As Governor, McAuliffe conducted a record 35 trade missions to dozens of countries, personally delivering Virginia’s calling card to business leaders around the globe. As a result, hundreds of thousands of jobs were created and more than $20 billion in new capital investment to communities across the Commonwealth, which was billions more than any previous governor. He oversaw the unemployment rate dropping from 5.4% to 3.6% and initial unemployment claims fell to a 44 year low. Personal income rose 12.3% during his term of office.

Protecting the rights of all Virginians was always a top priority for McAuliffe. He successfully vetoed a record 120 bills that would have taken Virginia backwards. In doing so, McAuliffe protected women’s access to health care, Virginia’s world-class education system, the environment, the integrity of our electoral system and kept more guns off the streets.

He made unprecedented progress on the restoration of civil rights to rehabilitated felons who had completed their sentences and paid their debt to society. During his tenure, McAuliffe restored the rights of more than 173,000 Virginians, more than any other governor in U.S. history.

During the McAuliffe administration, the Department of Juvenile Justice reduced its population in state-operated Juvenile Correctional Centers by nearly two-thirds. Virginia achieved the lowest adult recidivism rate in the nation in 2016 and maintains that position today.

McAuliffe won bipartisan support for an historic $1 billion investment in public education and higher education, the most in Virginia history. As a result of his actions, students saw the lowest tuition increase in 15 years. He also successfully secured passage of a law establishing a pay-for-performance workforce training program, the first of its kind in the country. Virginia became the first state in the nation to adopt computer science and computational thinking standards in its K-12 curriculum. He secured an unprecedented investment in preschool education, expanding access for thousands of low-income children across Virginia.

McAuliffe also took the lead in rebuilding Virginia’s aging infrastructure. Through his efforts, $10 billion in new roads and rail projects were announced. The Port of Virginia was saved from insolvency, and he strengthened Dulles International Airport.

Virginia became the first state to be designated as an employer of National Service.

McAuliffe also led the effort to make Virginia the first state in America to be certified to have functionally ended veteran homelessness. In addition, 30,000 veterans were hired through the Virginia Values Veterans program, a six-fold increase.

McAuliffe won bipartisan support for legislation to reduce gun violence in Virginia. It was the first comprehensive gun legislation to become law in 24 years.

He served as Chairman of the National Governors Association (NGA), where he used that leadership position to assist states as they strengthened their cybersecurity policies and infrastructure.

McAuliffe worked to build a solid cyber ecosystem in Virginia where he created a cyber security commission charged with developing industry relevant recommendations. He was the first Governor to take executive action to secure consumer transactions and the Commonwealth’s data. Virginia now has the most cyber companies in the United States of America.

President Obama appointed McAuliffe to the NGA’s Council of Governors to provide advice on national security matters. McAuliffe is also a founder of the National Democratic Redistricting Committee to combat gerrymandering and to ensure fair voting districts.

In December 2017, McAuliffe was named “Public Official of the Year” by GOVERNING magazine.

In politics and business, McAuliffe has worked with people from all walks of life and different political backgrounds. He entered national politics at the age of 23 as the national finance director for President Jimmy Carter. He was elected Democratic National Committee chairman in 2000 and served until 2005. He co-chaired President Bill Clinton's 1996 campaign for reelection and his 1997 Presidential Inauguration. He was also chairman of the 2000 Democratic National Convention and chairman of Hillary Clinton's 2008 Presidential Campaign. In 1993, he was appointed by President Clinton as Ambassador and Commissioner General of the United States Taejon International Exposition in South Korea.

The youngest child growing up in a middle-class family, McAuliffe has been a lifelong entrepreneur. At age 14, he started his own business paving driveways for neighbors and local businesses. Since then, he has worked with and led dozens of businesses in diverse sectors of the economy helping to improve companies and create economic opportunity.

McAuliffe and his wife Dorothy were married in 1988. They have five children. Their eldest son is a Captain in the United States Marine Corps. 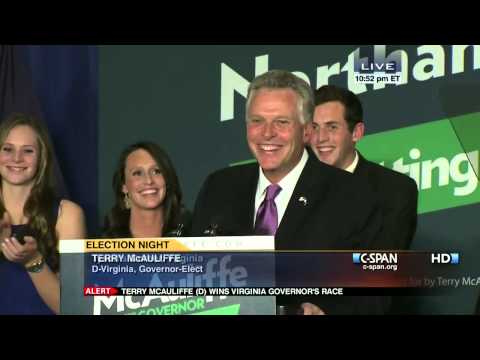 The Nation’s Prospects. McAuliffe addresses the policies and decisions that are shaping America in the current administration. He discusses the current state of politics in Washington, bringing his decades of experience working closely with the political figures across the entire political spectrum. His presentations are energetic, optimistic, and always full of the humor, honesty, and charisma that has made him a favorite with audiences of any political orientation.

The Life Of His Political Party. Go behind the scenes of a national political campaign with Governor Terry McAuliffe, who also served as chairman of the Democratic National Committee (DNC) and the former campaign chairman for Hillary Clinton for President. A dynamo credited with reenergizing the party, he spearheaded new state of the art technology to connect grassroots activists with the party’s new information infrastructure. McAuliffe shares his insights into guiding a presidential frontrunner, creating a winning team of staffers, and generating record-breaking funds. Having worked as a top aide to former President Bill Clinton, and being the former chair of the DNC, McAuliffe’s efforts paved the way to a re-election, and enabled the DNC to be debt free. His presentations are bursting with humor, energy, and political prowess. McAuliffe has been in Democratic politics for more than 30 years, and his stories are full of wit and valuable lessons paired with McAuliffe’s trademark frankness and charm.

Success In An Era Of Gridlock. In the current political climate, citizens are desperate for leaders who can make progress by finding common ground. As Governor, McAuliffe won bipartisan support for a historic $1 billion investment in K-12 public education. As Chairman of the National Governors Association, he used that leadership position to assist other states as they worked to strengthen their cyber security infrastructure, leaving them better equipped to understand their vulnerabilities and providing tools and guidance to secure their state systems and data. Moreover, as Governor, McAuliffe conducted 35 trade missions to dozens of countries, personally delivering Virginia’s calling card to business leaders around the globe. Hundreds of thousands of jobs were created and more than $20 billion in capital investment was brought to the Commonwealth, billions more than any previous governor. He has brought the unemployment rate from 5.4% to 3.6% and initial unemployment claims have fallen to a 44-year low.

Governor McAuliffe has given talks all over the globe on a variety of topics, including cyber security, economic development, restoration of rights, renewable energy, trade, education reform, transportation, and workforce development.

Beyond Charlottesville: Taking a Stand Against White Nationalism