Home / Events / Virtual and Hybrid Events / Hakeem Oluseyi's A Quantum Life: My Unlikely Journey from the Street to the Stars
Back to Events

Hakeem Oluseyi's A Quantum Life: My Unlikely Journey from the Street to the Stars 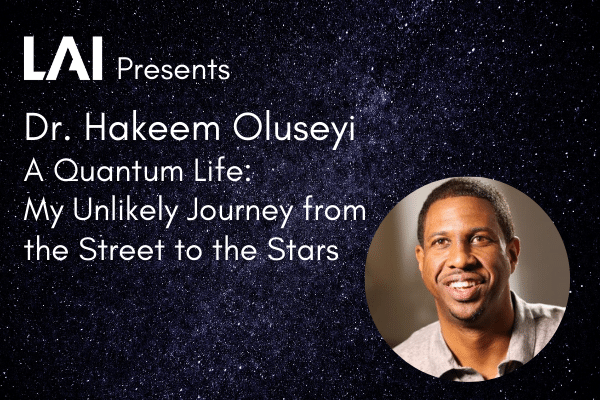 On Wednesday, July 14th at 11am ET we were joined by Dr. Hakeem Oluseyi, author of the new hit memoir, A Quantum Life: My Unlikely Journey from the Streets to the Stars. Hakeem is an internationally-recognized astrophysicist, science TV personality, and global education advocate who has had a long, distinguished career in academia and scientific research.

Dr. Hakeem Oluseyi grew up in some of the roughest neighborhoods in the country. As a result, he spent a lot of time inside, reading encyclopedias and watching PBS nature shows. Throughout his childhood and into young adulthood, he was repeatedly faced with circumstances that would make most people give up—a lack of supervision at home, attending his state’s lowest rated school, falling in with the wrong crowd, and failing physics exams when he ultimately made his way to Stanford. But Hakeem never gave up.

Today, as a world-renowned astrophysicist and the former Space Science Education Lead at NASA, Hakeem inspires audiences around the world to chase impossible dreams, fight for what they want, refuse to listen to naysayers, and reach out and lend a hand up to those around them. Hilarious, honest, and inspiring, Hakeem wows audiences with a look at his mind-bending scientific research while motivating them with his personal life story.