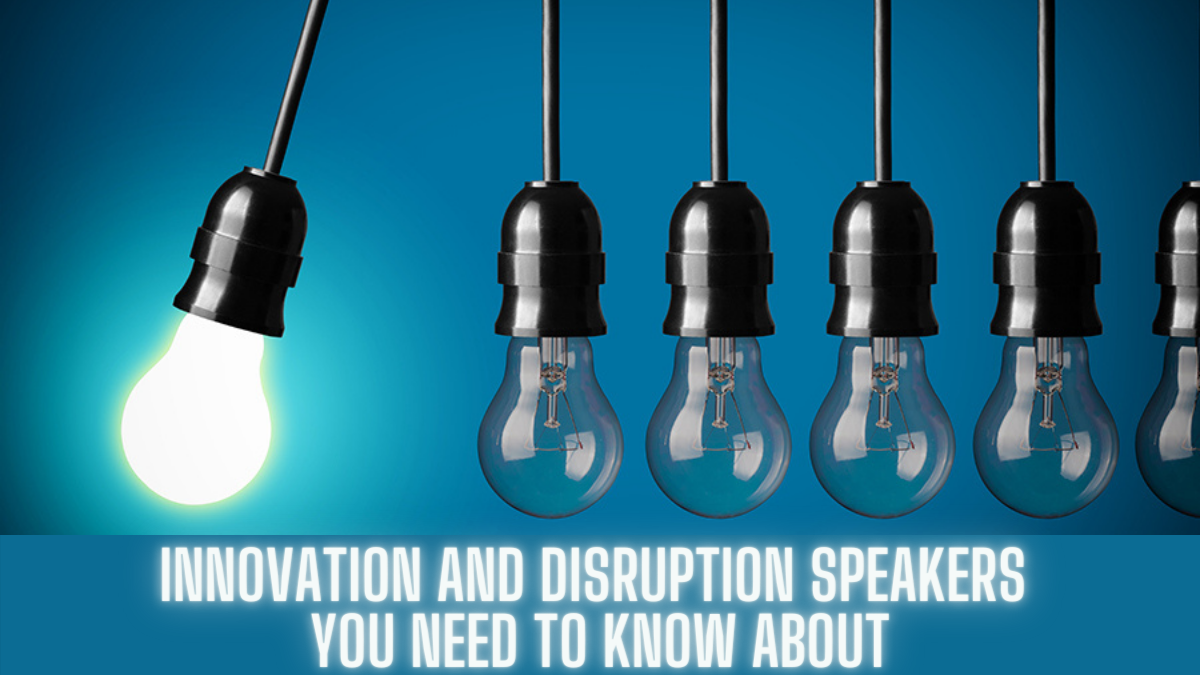 Worried about competition that’s running away at warp speed? Wondering how to create an environment that allows innovative ideas to catch fire? Want to boost a disruptive mindset within your senior and junior members of your ranks alike?

In today's world, the key to success is innovating in an era of disruption. Our speakers will motivate your audience and spark their imagination which will help companies that are on the constant lookout for breakthrough ideas.

These are our top recommendations for innovation & disruption speakers:

Jessica O. Matthews is an award-winning entrepreneur, inventor, and social scientist with more than 10 years of demonstrated thought leadership in the future of the built environment, climate resiliency, and improving equitable access to infrastructure resources. She is the founder and CEO of Uncharted, a sustainable infrastructure company that helps cities reduce the cost of developing smart infrastructure. Called “the Elon Musk of kinetic energy” by former U.S. chief technology officer Megan Smith, her groundbreaking research and career center around the intersection of disruptive technology, renewable energy, human behavior, and the psychology of self-actualization.

Dr. Poppy Crum is a visionary futurist and neuroscientist whose work sits at the intersection of technology advancement and human evolution. Highly regarded in both the technology sector and academic circles, she is an Adjunct Professor in Computer Research at Stanford University and the Chief Scientist at Dolby Laboratories, a leading global innovator and developer of audio, imaging, and voice technologies. An advocate for the kind of technology that learns more about us as we use it, Dr. Crum works to bridge the gap between rapidly evolving technology and insightful, more effective human interaction.

An award-winning innovator and disruptor, Reggie Fils-Aimé is a proven expert on transforming companies, re-vitalizing brands, and reshaping industries to solve daunting challenges and achieve ‘the impossible.’ Most recently, he was the president and chief operating officer of Nintendo of America – the first American and African-American to hold this position.

A business trailblazer and industry disruptor, Josh Luber combined his passion for entrepreneurship and sneakers to co-found StockX, the world’s first “Stock Market of Things,” with partners Dan Gilbert (co-founder and chairman of Quicken Loans and majority owner of the Cleveland Cavaliers), Greg Schwartz, and Chris Kaufman in 2015. As CEO, Luber led StockX’s rise from idea to billion-dollar company and cemented its status as the leading marketplace for sneakers, apparel, and collectibles in under three years.

A leading expert in robot ethics, Dr. Kate Darling is a research specialist at the Massachusetts Institute of Technology (MIT) Media Lab, where she investigates social robotics and conducts experimental studies on human-robot interaction. She explores the emotional connection between people and life-like machines, seeking to influence technology design and policy direction. Dr. Darling’s writing and research anticipate difficult questions that lawmakers, engineers, and the wider public will need to address as human-robot relationships evolve in the coming decades.

As a Commissioner of the Commodity Futures Trading Commission (CFTC) from 2017-2021, Brian Quintenz spearheaded the implementation of forward-thinking policies designed to uphold the integrity and resilience of the U.S. derivatives markets during a highly transformative period in finance. One of the sector’s most prominent voices, Quintenz was nominated by both Presidents Obama and Trump to serve as a Commissioner of the CFTC and unanimously confirmed by the Senate. He remains an advocate for narrowly tailored, risk-calibrated regulation and a champion of innovation and growth in the financial technology (fintech) space.

Dustin Garis is a world-renowned brand innovator, consistently voted “the #1 event speaker.” Throughout his disruptive career at some of the world’s most respected companies, The Coca-Cola Company and Procter & Gamble, Garis has become known as “Chief Troublemaker” for his innovative approach to brand-building, customer experience, and change leadership.

Best-Selling Author and Expert on Innovation, Disruption, and Change

A Wharton professor and NYT best-selling author, Berger looks at the science behind leading effective change, touching on how to overcome change avoidance, work around the “curse of knowledge,” craft new messages that encourage buy in, and communicate the reason for and vision behind change at a time when everyone will hear the message differently.

Mike has worked with CEO’s and R&D executives from companies including BMW, Google, P&G, L’Oreal, and AirBus to transform technology disruption of their industries into new lines of business. Currently Executive Director of Stanford’s Digital Cities Program, he talks about where innovation comes from and how to blend ideas with technical expertise and business models to cure age-old problems.

According to future trends expert Paul Zikopoulos, “every day we walk by solvable problems, leaving opportunities untapped.” The VP of Big Data Analytics for IBM discusses how working these “solvable problems” creates disruption in the marketplace, changing the way audiences look at their businesses in terms of potential sales, obstacles, and potential for growth.

CEO of Not Impossible Labs, Two-Time Winner of SXSW Innovation Award, and Author of "Not Impossible: The Art and Joy of Doing What Couldn't Be Done"

Award-winning entrepreneur and inventor Mick Ebeling has passionately studied the concept of “impossible.” All modern conveniences were once considered impossible by people who didn’t know any better. Ebeling dives deeper into “impossible,” the underlying psychological effects it has on an organization, and how to overcome it so true innovation can take place.

As Global President of Gatorade, Sarah transformed Gatorade from a declining sports drink company into a booming corporation with brand extensions featuring drinks, shakes, protein bars and more. As a GM at Nike, she rolled out the game-changing Nike Plus shoe technology developed alongside Apple, which brought fitness tracking into Nike’s business model. Currently CEO of Flywheel Sports, Sarah shows audiences how to disrupt their industry first.

How did Trader Joe’s, a company that started as a 7/11 knockoff, become the hottest retailer in America? Through his experience as President of the popular grocer, Rauch has learned to be a master of innovation. With the mantra “innovate or die,” he shows organizations how to consistently push for new and better ways to perform.

When brands like Google, Walmart, Starbucks, Microsoft, Procter and Gamble, Twitter, and Unilever want to leverage technology to better connect with their consumers, they call Mitch Joel. Mitch is the founder of Six Pixels Group – an advisory, investing, and content producing company that is focused on brands, commerce, community, and what’s next. Prior to Six Pixels Group, Mitch was the president of Mirum – a global marketing agency operating in 25 countries with close to 3,000 employees.

A beauty industry vanguard, Jessie Hayes-Stallings is the founder and CEO of Skinphorea Facial Bar & Acne Clinic who took her passion for skincare and manifested it into the first facial bar and acne clinic in Metro Detroit — a concept that has made waves in the industry. Noticing a gap in the market for the on-the-go client with limited time for professional skincare services, she created an express service that offers women a faster, best-in-class facial spa experience without breaking the bank.

As cord cutting was becoming a trend, Steinberg saw an opening in the media market to create Cheddar, a video-based media business named to Fast Company's 2017 list of "The World's Most Innovate Companies." Formerly an executive with Buzzfeed, his hilarious and candid presentations offer a look at lessons he's learned while growing his start-up to an industry leader. He gives first-hand experiences of issues facing the modern business, how to retain a competitive edge, and how to grow by tapping into the millennial market.

Founder and Chief Purpose Officer of The Honest Company

In today's world, the customer expects both convenience and sustainability, and The Honest Company takes that experience to the next level by placing non-toxic products in the hands of parents around the globe. This Honest Company co-founder, who grew his business alongside actress Jessica Alba, demonstrates how to deliver product excellence while not sacrificing superior customer experience.

Founder and CEO of Johnny Cupcakes

Named "America's #1 Young Entrepreneur" by Businessweek, Johnny Cupcakes is a master at cultivating an experience that customers—young and old—flock to time and time again. The key takeaways involve the power of details, collaboration, and the art of rolling with the punches while learning to adapt.

Former Politico executives Jim and Mike saw a gap in the way people consume news and established a new delivery system. Together they launched Axios earlier this year—a “quick yet refined” news service for a mobile audience. It’s already become a mainstream news source that’s changing the way media is being consumed. Jim and Mike talk about how they continue to push to be better and respond rapidly to changing consumer needs.

Anthony Foxx is the Chief Policy Officer at Lyft who formerly served as the 17th United States Secretary of Transportation and as mayor of Charlotte, North Carolina. As Secretary of Transportation, he led an agency with more than 55,000 employees and a budget of $70 billion. Sec. Foxx was responsible for overseeing American air, maritime, and surface transportation and ensuring that America maintained the safest, most efficient transportation system in the world. Confirmed by a rare 100-0 Senate vote, Sec. Foxx’s career success is indicative of his demonstrated ability to push forward in an era of deep partisan divide.

Sheryl Connelly has served as the in-house futurist for Ford Motor Company for over a decade. In this role, she identifies and analyzes global consumer trends to aide in the discussion of long-term planning and strategy across the entire company, including design, product development, and corporate strategy and help anticipate and predict the needs and desires of consumers.

Reach out to us to check any of these individual's speaking fees and availability or if you want to book one of these speakers for your next event.

To get in touch with us, you can also fill out the form below, call 1-800-SPEAKER, or live chat with a member of our team right now.