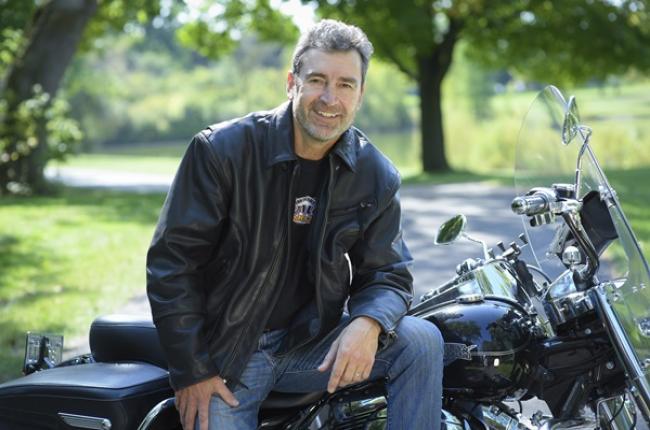 The former director of communications for Harley-Davidson Motor Company played an active role in one of the most celebrated turnarounds in corporate history. He’s since advised executive leaders of many of the world’s best-known brands, delivered more than one thousand keynote presentations, written two best-selling books and created a popular business podcast.

He’s widely respected as one of the business community’s most outspoken, provocative, and entertaining thought leaders on competition, loyalty, human behavior, workplace culture, brand management, positioning and reputation management -- and how each of those topics impacts the others.

The longtime motorcycle enthusiast’s formal association with Harley-Davidson began in 1985. As a specialist in corporate positioning and financial relations, he was asked to work with the struggling company to help restore its image, improve its competitiveness, create demand for its motorcycles and attract investors. Within a few short years, as sales of its motorcycles rocketed upward, Harley-Davidson became one of the most respected, competitively dominant, profitable and frequently reported-on companies in the world.

Today, Schmidt’s focused on his greatest passions, motorcycling, speaking and helping business leaders to improve their competitiveness. In addition to “Make Some Noise: The Unconventional Road To Dominance,” he also ghost-wrote, “100 Years of Harley-Davidson,” the best-selling motorsports book of all time. In 2021, he launched, “Tailgating With Geniuses,” a highly successful business and entertainment podcast.

Ken Schmidt: This is how brand demand gets created

Thrive Among the Thorns: Creating an Emotional Connection

Make Some Noise: Open the Throttle & Dominate Your Marketplace. Ken Schmidt’s bread-and-butter keynote is a fascinating story of how businesses of any size and scope can—by focusing on understanding and harnessing the most basic drivers of human behavior—improve their competitiveness and avoid margin-killing commoditization in even the most difficult marketing environments. The road to building a fanatically vocal customer base, creating a passionately loyal corporate culture, and developing leaders who inspire and motivate starts here.

Building Tattoo-Worthy Customer Relationships. We’re not wired to be loyal to products or services, no matter how well they perform. We’re only capable of being loyal to people and to well-managed brands that successfully humanize their presence by creating emotional resonance with us – even if our prices are higher.  It’s time for your customers to evolve from “folks who buy from us,” into “loyal friends who recommend us without being asked,” which means your relationships with them have to evolve from superficial to meaningfully permanent. Customers come and go, but loyalists, like Harley-Davidson tattoos, become part of you and never leave.

Fierce Loyalty: Dominating in a Commoditized Market. When customers care more about what they’re paying than who they’re buying from, businesses lower prices to stay in the mix and leaders ask, “Whatever happened to loyalty?” They ask the same question as they struggle to attract and keep employees in the era of the “Big Quit.” The problem is clear: Businesses of all sizes need to understand the drivers of loyalty and how to harness them if they’re going to be dominant in increasingly commoditized, hard-to-hire market spaces. This is a how-to, natural follow-up to any of Ken’s presentations.

Thrive Among Thorns: Untapped Growth Opportunities for Financial Services. Ken Schmidt’s most requested topic from financial industry clients. With little differentiation among competitors, it’s no wonder potential clients opt to work with “whoever’s closest to my house,” instead of “whoever can best serve my needs.” Or stay away altogether. Where others see futility, there are unprecedented opportunities for growth. Here’s how to change the culture of your financial services business to stand out, create demand and client loyalty in your local markets, fuel marketplace advocacy and take advantage of the look-alike/act-alike competitive environment.

5 'Weapons of Mass Attraction' to Help You Gain More Clients

Ken Schmidt On A Step Beyond with Dr. Anthony Paustian

Company Culture is Key to Revenue

Perfect Speakers for Your Next Sales Meeting

Ken was truly amazing!  We had him simulcast at four different locations throughout the country. He provided incredible insight to his experience with Harley, while also made it relatable to our work here at Amway.  His message was impactful, and truly encouraged our attendees to be leaders, look outside the norm, and get back down to basics.  Continue creating great products, but excel through customer service.  Everyone left this meeting energized and motivated and utilizing his approach in on our teams.

Ken did a great job presenting for us and for all the advanced prep work he did to really drive the message towards our audience.  He was a hit! It was a pleasure working with him!

Your presentation was a huge hit at the event, and the overwhelmingly positive comments focused on the relevance of your content, the energy/passion/humor of your delivery, and the overall fascinating story you deliver regarding one of the most famous companies of all time. Speaking confidently from my 15 years of experience working in the PTC Sales organization, this can be a tough crowd. And the timing of your delivery at end of our second day of General Session made me a bit nervous, but you carried the show and left the audience on a huge high mark. Thanks again so much for your work with us!

Make Some Noise: The Unconventional Road to Dominance